Let’s start this off by saying I’m a big fan of Games Workshop. They have produced a number of great worlds and amazing miniatures which I appreciate even though they’re expensive and I’m crap at painting anything smaller than the walls of my flat.

Despite my keenness, I’ve never actually ‘played’ any Games Workshop game. They take ages to set up and are full of dice rolling which is a little slow and a lot tedious. This is where Cyanide’s faithful recreation of Blood Bowl comes in. Its biggest strength is that it’s a streamlined version of the somewhat clunky to play miniature game with some nice visuals. Its biggest weakness is that it’s a streamlined version of the somewhat clunky miniature game with some not so nice bugs.Before we get into the detail, let’s give an overview of what Blood Bowl actually is. Basically, it’s American Football but played by Orcs and Elves. You have to get the ball into the opponent’s endzone and other than that, there aren’t too many details. You can foul your opponents and do them some serious intentional harm. Harm so serious, it can sometimes result in permanent death. That’s the worst kind of death.

As well as Orcs and Elves, you have humans (boring), demons and dwarves. It’s like the NFL and The Hobbit had a baby, and that baby was quite nasty, quite angry and quite violent.

So, that’s what the table-top game of Blood Bowl s all about, let’s get on with talking about the video-game Blood Bowl 2. Starting at a superficial level, it really looks the part. Good designs straight from the Games Workshop catalogue and plenty of different teams that have differing aesthetics provide a strong visual style and make it quite easy to spot different players.

Let’s just say that you’re not likely to forget that the hulking demon-beast with tentacles is not to be messed with and the spritely wood elf wearing very little is likely to be very quick. These simple visual cues help you get a good idea of what you’re up against before you even look at a stat screen. You will be looking at stat screens eventually. A lot. 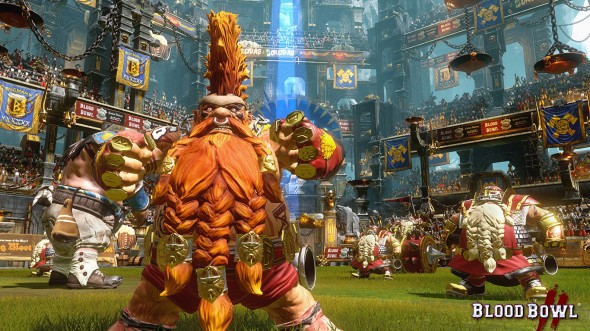 You don’t need to be a genius to figure out this guy has a good ‘strength’ stat.

Easing you into the stat, rule and perk laden world of Blood Bowl 2 is a fairly comprehensive campaign mode. The campaign is essentially a long tutorial and is better written and more interesting than it has any right to be. Funny quips from the two commentators that are clearly making fun of the awful level of punditry we get in real-world sports broadcasts are pretty entertaining and make Michael Owen’s real-world attempts at talking about sport look more laughable than they already are. For the most part it’s well-written and mostly funny, though sometimes it seems like it’s trying too hard with its Facebook and Twitter references. Still, it’s nice that it’s trying too hard rather than not trying at all, so it’s greatly appreciated.

The campaign also has some suitably bizarre set-pieces that affect how the match plays out (a crashed helicopter on the field, for instance) but these set-pieces introduce new mechanics in each match. Rather than tell you that you can both bribe refs and foul downed players, the campaign sets you up with a story that you’re playing the dirtiest team in the league and they’ve bribed the ref and are now out to literally kill your players. This is a great way of explaining what is a very, even overly, complicated game.

Don’t get me wrong – I love games that are ‘deep’. Blood Bowl 2 offers plenty to think about, be it stats, chances of completing certain moves or having a meta game of building up a roster of players. These are all great. Blood Bowl 2, however, veers into ‘too complicated for its own good’ territory.

Just when you think you’ve got a handle on things, you’re boshed over the head with a new rule (huh – players can be pushed off the field and killed by fans, who knew?) and you’ll come up against players that have traits and abilities that you’ve never seen before. Whilst Blood Bowl 2 explains players’ abilities in a very dry, lifted straight out of the original rulebook fashion, you’ll often not fully comprehend just how the newly introduced special ability will affect play. Never come up against a player that can throw other players? You have now, as said player goes flying across the field and into your end zone. You lose.

This can become a problem as Blood Bowl 2 is pretty tough as it is. The biggest issue is that everything comes down to the roll of a D6. Even if you’ve got all the stats in your favour, there’s still a 1 in 6 chance that the thing you’re trying to do will fail. This is even harsher when nearly everything you do requires a roll. Want to run further? Roll a dice. Want to throw the ball? Roll a dice. Want to catch the ball you’ve just thrown? Roll. The. Dice. 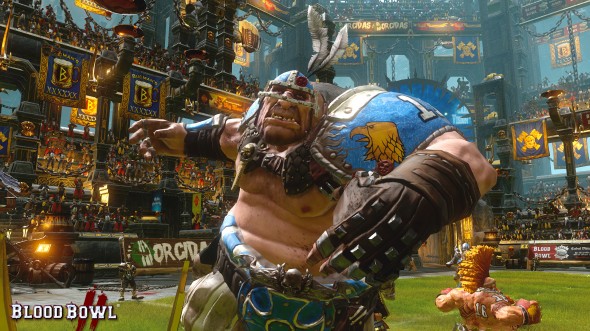 This Ogre may look tough, but ask him to move 1 square too many and he’ll be on his arse.

The penalty for failing these rolls isn’t just that your plans get scuppered, it’s that (for most mishaps) your turn ends. With the first roll of your turn, you can make a tackle and have it go poorly resulting in your player dying and your turn then being finished. This means there’s a real tension to each game as you know that you’re never entirely sure your plans are going to be executed and that you’re going to want to perform your ‘safe’ manoeuvres first. This might sound great but in practice the tension boils over into frustration.

It’s one thing for a strategy game to punish you for having a bad plan – such as rushing the guy with the ball only for the guy to throw said ball and score a touchdown – but to punish you for simply being ‘unlucky’ is a little hard to swallow after you’ve just spent 45 minutes playing a single match.

Something else that’s really hard to swallow is the bugs that I ran into. Sometimes events wouldn’t trigger properly and that would leave you with a game that’s impossible to finish as the A.I. gets confused and sits there stuck in an infinite loop. The salt gets rubbed into the wound when you see the A.I.’s ‘turn timer’ tick down to 0 and rather than force the computer to concede its turn, you simply sit there until you reset the PS4. 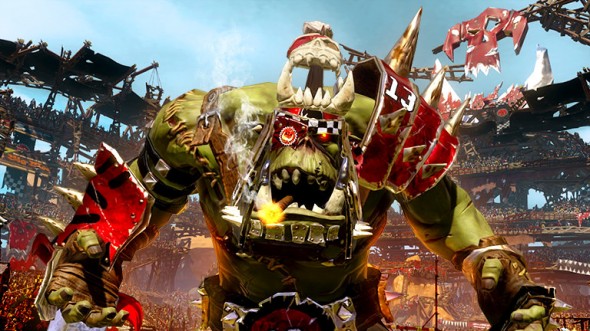 Sometimes the game is as smart as an Orc. I assume that Orcs aren’t smart. Oh – you get the idea.

These bugs mainly occur in the campaign mode, though there are other play options on offer. Mainly taking the form of leagues, cups and one-off exhibition matches to play, it’s pretty standard fare. Your team does grow as the seasons are played, with your players receiving experience points for successfully completing actions such as scoring touchdowns, throwing passes or straight-up murdering the opposition. Even this levelling-up process is held hostage by Lady Luck. Upon reaching a new level, you roll a D6 (surprise, surprise) and depending on the result, you can pick a perk or stat upgrade. It’s such a disappointment to work hard on players only to have them receive minimal boosts. Ooh, I can move an extra square of movement? Thanks Blood Bowl 2, you’re far too kind…

All of these issues aside, it’s important for me to make something clear. When you pull off a well executed play, when everything works out as planned and you score a touchdown, Blood Bowl 2 is immensely satisfying. When the players you’ve signed finally level up, when you’ve got a gameplan figured out that works and when the team you’ve put hours into wins the league, it’s a rewarding culmination of your efforts, even if it does require a large amount of luck to get to the top. 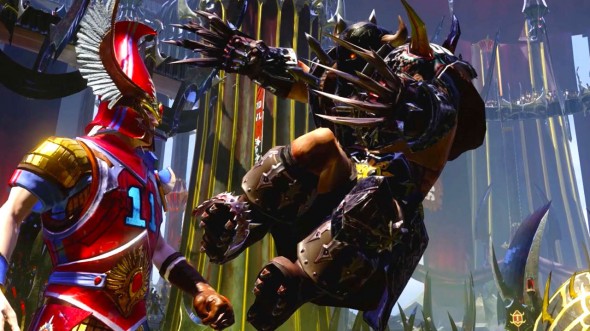 It’s actually against the rules to tackle with only one foot.

Out to get lucky?

This overwhelming hold that luck has on everything is ultimately what will make or break your enjoyment with this title. The depth of the rules, the complexity of how different traits interact with each other and the ruthless nature of the A.I. are all great, but it’s the dodgy dice-rolls and the seemingly outrageously lucky plays the computer will make that will really test your patience. Which isn’t really the game’s fault, really. It’s just being faithful to the table-top game that it’s based off, but to a fault.

It’s because of this that it’s hard to recommend this to everybody. Ideally, you’d need to be a fan of Blood Bowl, be willing to put up with a design that’s over-reliant on ‘luck’ and be happy to play matches that take up to an hour to complete. If this sounds like something you’d be into, then check it out. Otherwise, err – don’t?