After years of niche and middling franchises, From Software have really gotten into a groove with the Souls games. With stunning, bleak worlds to explore, cryptic lore and game mechanics, and an infamously harrowing difficulty level, Demon’s and Dark Souls have consistently divided gamers between two camps: those who hate them, and those who fervently relish their unique brand of challenge.

Creative Director Miyizaki’s newest creation is the PlayStation 4 exclusive Bloodborne. There may be no title continuity here, but make no mistake – Bloodborne is a Souls game right to the core in all but name, for better or worse. Nonetheless, it’s a refreshing take on the formula, a grand and foreboding construct, and a true flagship title for the PlayStation 4 in every regard.

Bloodborne starts out very much as you’d expect, considering its heritage. As a nameless ‘hunter’, you awake in Yarnham, a nightmarish Victorian town. Within a minute of coming to inside a mansion, you encounter a werewolf which you try to fight, completely unarmed. Needless to say you’re likely to die here, but on death you’re transported to the ‘Hunter’s Dream’, a location which acts as your hub world to other locations. Look closely and you’ll find subtle glowing notes on the ground, some of which grant you a weapon, amongst other items. Miss these and your only other option is to keep respawning back at the mansion near-defenseless and succumb to the werewolf over and over, as a friend of mine actually did.

Much of the opening portion of Bloodborne is just as cruel. Vicious townspeople patrol Yarnham, a horde of them gathering around an area which is crucial for you to pass through. Fast, lethal werewolves prowl some locations and there are several larger sub-bosses which are ruthlessly tough. What makes this worse? You can’t begin to level up until you reach the end of the first area and meet the main boss. This is a real rite of passage, chucking you in at the deep end and forcing you to become proficient with the combat before progressing any further. 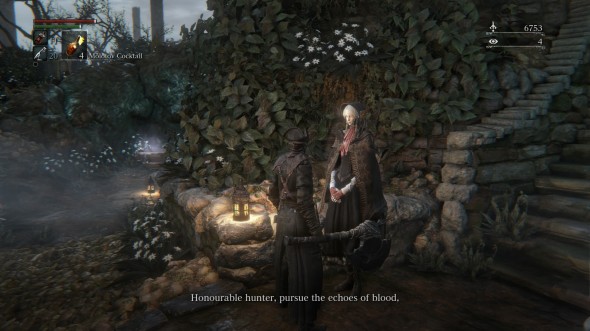 It’s only through this animated doll that you can level up, and she doesn’t appear until after you discover the first boss.

This combat is an aspect which has been quite strongly reworked from Dark Souls. It’s still difficult to master and relies on efficient use of stamina, but it’s now quicker and more ferocious. Blocking is a thing of the past, requiring well-timed evasion manoeuvres to dodge enemy assaults in its stead. Rather than maintaining a defensive strategy it actually pays off to dive in headfirst. An offensive approach – performed skillfully – can catch your opponent off-guard, and in a brilliant risk/reward payoff you can regenerate some lost health by landing hits shortly after you’ve taken damage. Every weapon has been granted a secondary function, transforming at will into a larger, slower but more devastating version, or imbuing itself with elemental damage.

The health systems themselves have also had a makeover. Rather than a regenerating Estus Flask, you now inject blood vials, of which you can hold a fairly generous 20 at a time. On paper this sounds a little too easy when coupled with the ‘hit-to-heal’ mechanic, but in Bloodborne you’ll be taking damage a lot. These aren’t replenished on death, either, which causes a frustrating need to grind for more if you keep failing a boss attempt. 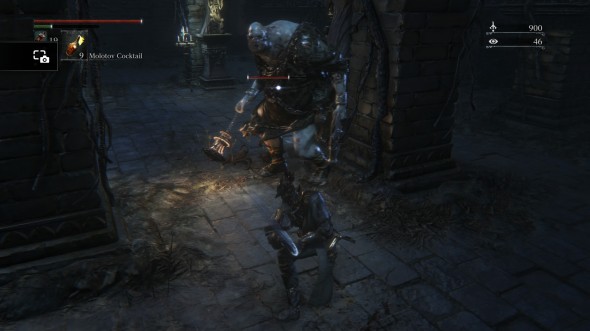 An encounter in one of Bloodborne‘s many optional ‘chalice dungeons’, some of which are procedurally generated.

Even though many features have been tweaked here and there, anyone with some experience of the Souls games will feel at home here. That said, Bloodborne very much has its own identity, switching tack from bleak fantasy to pure Lovecraftian horror. It’s desperately dark, with themes of decay, corruption and death. You’ll encounter various churches, cathedrals and graveyards along the way, adding to the sense of gothicism. Enemies are crafted with a disturbing level of creativity, ranging from beast-like men and swamp-crawlers to cursed beings with snakes for heads, masked figures and colossal reapers. Much of the bosses seem as vulnerable as they are powerful, marred with decomposing flesh and rotting limbs, despairingly regurgitating blood and poison.

Paradoxically, however, Bloodborne is nothing short of beautiful. Not only is the art direction a triumphant, nightmarish application of vision, but on a technical level it’s also well-accomplished. Lighting is the star of the show, the tumultuous skies casting grim, hazy light and harsh shadows over the landscape. 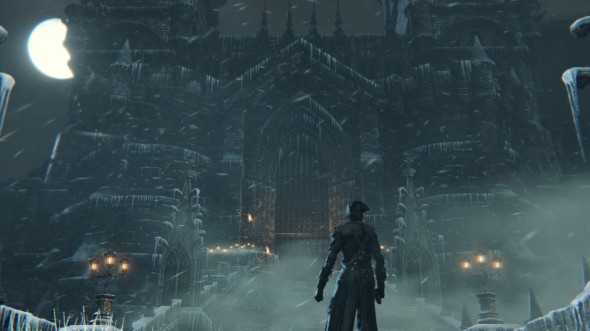 Castle Cainhurst: So pretty. So foreboding. So unforgiving.

Levels are sprawling labyrinthine passages full of tricks and traps, unforgiving beasts and hidden secrets to uncover. When you’re deep in unfamiliar territory it’s easy to feel a choking sense of dread and panic as you try to avoid losing the sizeable pile of Blood Echoes you’ve accumulated – Bloodborne’s take on experience points, which can only be spent in The Hunter’s Dream. Needless to say there’s a rush of relief on making it back to a lamp, the teleporting safe points analogous to Souls bonfires. Rather than having plenty liberally scattered around, however, most areas cleverly interlock with each other using one-sided gates, doors and lifts that open up shortcuts back to a previous lamp.

Patience is a virtue, whereby it pays to slow down and tentatively progress one step at a time, else risk falling afoul of an ambush. That said, the level design masterfully straddles the line between being tough, and just plain unfair. Run through an area several times and you’ll gain a grasp on pitfalls to avoid, shortcuts and optimal ways to tackle the enemies within. You’ll also benefit from user-created notes that litter the ground, providing hints, warnings and jokes in the wonderfully broken English afforded by a limited word selection. 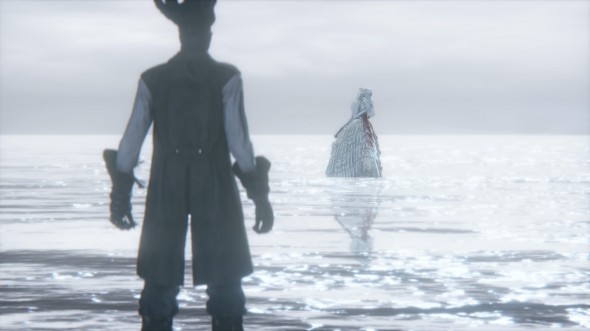 Probably one of the only times that you’ll actually see bright light in the entire game. It doesn’t last long.

The first few areas are still, at times, crushingly difficult. I don’t know if this is as a result of over-levelling, or perhaps just getting better at the game, but over time I found Bloodborne to actually have an inverted difficulty curve. That’s not to say I found later sections easy, just more manageable. Bosses nonetheless throw grueling challenges at you every time they appear. Whether it’s through their breathless agility, lethal attacks that decimate your health bar in one hit, or application of elemental damage or poison, each will seriously put your skills to the test. Thankfully, a Beckoning Bell lets you summon co-operators to help even the playing field somewhat. I myself used this feature quite a few times. For research. I was reviewing the game, so I had to test that it worked, you see. That’s my story and I’m sticking to it.

Of course, Souls-like games are meant to be hard. That’s the point, and on the whole, I’m fine with that. But now I’m going to complain about it. I completely respect the general design and mechanics being challenging. What has irritated me about Souls games in the past, however, and what irritates me still with Bloodborne, is the intentional obfuscation of information. This is a game which you’ll struggle to play within a vacuum. I strongly dislike using guides, but I begrudgingly had to resort to them fairly often to understand what I was meant to do next, or how to accomplish an obscure task. Whether it’s the confusion that can arise from finishing one area and trying to work out where to move on to; the fact that half of the sections of the game can be effortlessly missed; or obtaining the ‘good’ ending, which can only be achieved through collecting several ludicrously elusive items; accept that you may have to swallow your pride and seek advice from elsewhere. 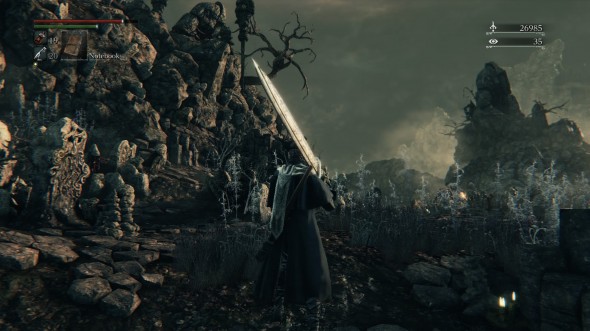 I won’t go into details, but I probably would have missed this area entirely if I didn’t hear about it from a guide.

Then there are the many undisclosed systems within the game, such as how something as trivial as carrying a lantern can marginally slow your character down, that holding too many Insight points subtly increases difficulty, or how some stats aren’t useful for most builds and would be a waste of vital skill points. I can appreciate how the enigma surrounding much of Bloodborne helps build a sense of mystery, but I sometimes found that it merely led to frustration. It’s no fun getting lost or making irreparable mistakes in a game that’s already very difficult to begin with.

I felt conflicting emotions whilst playing through Bloodborne. Often I was engrossed, losing myself in the fascinatingly desolate atmosphere, as I intrepidly edged my way through a level. Sometimes I despaired at the seemingly insurmountable odds I faced, only to make it through one way or another. Occasionally I felt aggrieved at the game’s purposely opaque nature as I hit a wall from lack of knowledge. Reflecting back on the experience as a whole, however, it was certainly a memorable one.

We’re deep into the new generation of consoles now, but the number of worthwhile, true exclusives – those not found on PC – is still decidedly slim on both sides. Bloodborne, however, is not only unmissable for Souls vets, but an essential purchase for any PlayStation 4 owner that values their console as more than just a machine for FIFA and Netflix.