Ubisoft hasn’t ever really been known for a prolific role-playing output, but after sampling Child of Light, it makes me wonder why the hell not. Using the always impressive Ubiart engine, Ubi Montreal has turned in a terrific RPG with a style and verve that suggests they’ve been churning them out for years.

Notably, of course, Child of Light is undeniably a visually striking game, but strong mechanics definitely lie behind its charismatic exterior.

Child of Light seeks to position itself as something of a fairy tale, following the adventures of a young Austrian girl called Aurora. Aurora has fallen victim to an unknown illness that causes her to enter a seemingly unbreakable sleep, yet she finds herself awakening in an outlandish fantasy world known as Lemuria. Lemuria is far from a magical, happy place however; the Moon, Sun and the Stars have been stolen by an evil presence, while dangerous creatures lurk and threaten in every area. Worse for Aurora, it transpires that her father, a Duke in the real world, has fallen ill with worry over her deteriorating condition back home; his own life in danger of slipping away unless she can return to the real world and get back to him.

This adds a bit of a Studio Ghibli twist to proceedings; Ghibli, of course, a studio famed for many works that centre on children trapped in strange worlds and left desperate to save their families. Although twee in many respects, such as in the way that nearly all the inhabitants talk in Nursery Rhyme fashion, the story operates on several levels and takes you through a number of emotions. It can be funny, sorrowful, and heart-warming all at the same time, but regardless of its given angle, it’s pretty much always charming. This in no small way is thanks to the delightful and quirky band of allies that Aurora brings together over Child of Light’s 12-20 hour course.

The world of Lemuria too is a charismatic star in its own right, owing to the magnificent painterly art style. Each new area of this 2D – yet nonlinear – watercolour masterpiece is more gorgeous than the last, but there is a certain melancholy quality that it carries throughout. Exploring constantly left me with an exciting sense of wonder, but not only because of continually pleasing aesthetics, but because Child of Light never tells you which way you need to go. In any other game this could be considered a negative, yet there is a great finesse with which you’re unconsciously channelled through to the right areas, and even if you take an unnecessary detour, there’s always something to reward you for your curiousness.

This encourages you to explore every nook and cranny, and doing so is never a chore thanks to Aurora’s ability to fly, which is unlocked refreshingly early on. Flight won’t find her everything however, and this is where a friendly, sentient flame known as Igniculus comes in handy. Much as you could move Murfy around in Rayman Legends, you or a co-op partner can use Igniculus to open chests that lie just out of Aurora’s reach or blind enemies so that she can pass on by unimpeded. 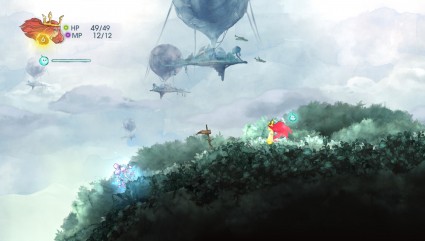 Every inch is lovingly painted…

If you touch an enemy, however, you’ll be pulled JRPG-style into a turn-based battle arena, and here the combat quickly became one of Child of Light’s most absorbing facets. Two members of your party will face off against up to three vicious beasties in a system that fuses classic elemental damage with a focus on timing and interruption. A bar at the bottom of the screen indicates the speed at which your party members and enemies can attack, and when your cursors hit the attack section (the red portion at the end of the bar), you’re able to select your upcoming assault.

If your cursor then hits the end of the bar, your character will perform your selected move, but if they get hit during this phase, they’ll get interrupted and will lose their turn. Thankfully, the same is true for enemies; hit them while they’re winding up an attack and you can avoid damage and give yourself a serious advantage. Working out the timings, particularly for boss fights is tense fun, especially when you realise that many of the stronger attacks take a good while to wind up.

Thankfully, you can use Igniculus to slow enemies, blinding them as you can in general exploration, which is a vital tactic at times for making sure you land an interruption. He can also marginally heal your troops, or replenish magic or his own power by either collecting the orbs freed by hitting the coloured bushes around the battle-screen.

As you’d expect, each of Aurora’s party has their own different strengths and weaknesses. Rubella, a Jester looking for their Brother, is an able healer but also good for a quick attack. Finn is your battle mage with numerous elemental skills at their disposal, Óengus is your tank, slow in attack, but hard to beat; there are a wealth of options to experiment with. Aurora too has her own uses as the name ‘Child of Light’ would suggest, her light-powered attacks proving fatal for creatures of darkness. The ability to switch characters out adds another strategic layer, allowing you to not only deal with every enemy that can be thrown at you, but also fortify dominance or be more defensive when you need to be. 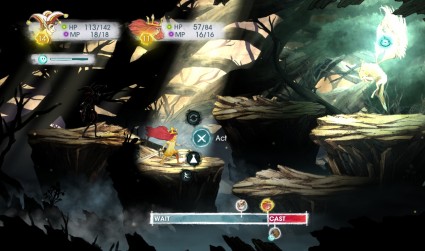 The deep combat is a joy.

Levelling up is a satisfyingly quick-fire process and compliments Child of Light’s shorter nature, rarely requiring as many two fights to see your party members jump up a number. Each time they do, a skill point is earned for you to spend on their personal skill tree. There are a number of directions you can take with each, and it’s fun to plot out and work towards the abilities you want, while also incrementally boosting general stats along the way. A basic but effective crafting system also allows you to augment your character’s trademark weapons with stat increases and elemental effects, to dish further damage.

Underpinning the entire adventure is one truly evocative original score that, for me, sits up there the best works of Joe Hisaishi, which quite quickly became an easy comparison to make. The soundtrack is suitably mournful, reflective, but is able to get your blood pumping when you’re thrown into battle.

Child of Light on Vita is pretty much a faultless port, looking and sounding just as good as the other versions. In fact, the art-style seems to pop even more vibrantly on Sony’s handheld, with rich colour coming to life gorgeously on the OLED model in particular. Although it didn’t perform differently enough to warrant a separate review by the same reviewer, I am pleased to report that Aurora’s adventure has been just as enjoyable this second time around. In fact, if it had launched along with the PS4 version, I reckon this would have been my preferred way to play it.

Child of Light is simply a beautiful and poignant RPG that delivers brilliantly on every level. The visual style is constantly a delight; Aurora’s whimsical journey through Lumeria is always charming and heart-warming, while the combat and quick-fire levelling offers enough options and complexity to remain fun over the entire campaign.

Its length could be the only point of contention for hardened RPG fanatics but its pacing is pitch-perfect, never saying or showing more than it needs to and ending at a point that feels natural for the story. For me, it goes a long way in arguing that RPGs don’t always have to be 60 hour epics to be worthwhile, because Ubisoft Montreal’s wonderful creation is worthy of anybody’s time.