Sequels; love ‘em or hate ‘em, they’ve been an important part of this generation. Rather than taking risks on new IPs, many publishers have played it safe and stuck to tried and tested franchises that are guaranteed to bring the cash flowing in. With developers and publishers downscaling and going out for the count left right and centre, you can’t really blame them either.

Yet sequels don’t have to be a bad thing. We’ve been treated to some fantastic trilogies and more-ogies during this console cycle; Uncharted, Gears of War, Mass Effect, Assassin’s Creed and Bioshock just to name a few. In these examples, every successive release stuck to the formula that fans loved whilst making refinements that kept it fresh. Sure, there may have been some missteps and divisive opinions over those changes, but at least you can say they tried something new.

Which is a lot more than can be said about Techland’s Dead Island: Riptide.

Dead in the water
After escaping the zombie-overrun island of Banoi in the original Dead Island, the four survivors immune to the infection find themselves on an aircraft carrier. Some stereotypical military bravado and evil-man-in-suit encounters later, and our dubious heroes are imprisoned on the ship and tested on, along with a new immune hero called John Morgan. Though it’s not too long before, surprise surprise, the ship’s crew turn into zombies too.

So after fleeing from one zombie-infested island, Banoi, the unlucky survivors find themselves washed up on another zombie-infested island, Palanai. Well, it wouldn’t be Dead Island without an island of dead, I suppose. The game is light on story, and what little there is serves as B-movie nonsense that just facilitates the action. The island’s remaining population, main characters included, consists of a mixture of generic clichés, annoying twits and just downright crazy people. 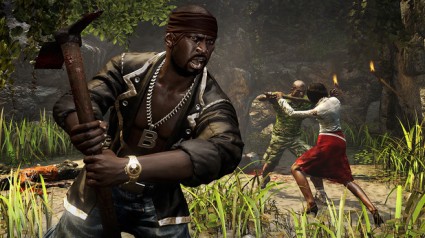 Sup, foo’? Hey dawg, am I lookin’ contrived enough yet?

Respawn of the dead
The first Dead Island was not a bad game by any means, just one that declined to provide even a shred of the emotion misrepresented by that gut-wrenching slow-motion cinematic we all drooled over like gullible fools. The emotion which was then provided by Telltale in spades with last year’s The Walking Dead, showing the world that a zombie game can have heart. Yet I digress. Dead Island did give us an open-world zombie game with brutal co-op undead battering and RPG elements; it was just a little rough around the edges, technically and in general design. All its sequel needed to do was address these issues and add new features, and they’d be on to a winner.

Of course, after its predecessor infamously failed to live up to that trailer, it only seems customary that Dead Island: Riptide should also fall short of expectations. Riptide is practically a straight-forward transplant of Dead Island, the good and the bad, into a different exotic locale. In an age of DLC, Riptide feels more like an expansion pack for the original and not a true sequel.

There are the same predictable fetch-quests for petrol, medicine, or trivial belongings that the NPC in question is too lazy or cowardly to go and fetch themselves. Over-zealous enemy level-scaling once again makes levelling up a much less rewarding endeavour than it should be. Then of course there are the common hitches in framerate that can last for several seconds at a time when the action ramps up, or sometimes for no apparent reason at all. 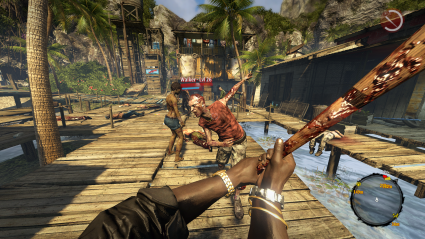 Hey, this zombie’s got the moves!

The constantly respawning game world is also equal parts baffling, exploitable and infuriating. No, an open-world game doesn’t have to be fully persistent. Yes, finite amounts of loot and enemies would leave the island feeling quite barren after a while and wouldn’t suit the RPG system. Yet there’s absolutely no justification for the fact that you can beat a crowd of walkers to the ground, walk a few metres and turn back to find a whole new group has taken their place, or that you can repeatedly leave and revisit a safehouse to fill your pockets with endlessly regenerating goodies.

Thankfully there are plenty of fun aspects that make a return in Riptide, at least. The Borderlands-esque loot system provides an enjoyable hunt as ever, having you rifling through suitcases, corpses and chests for money, salvage and weapons with names like Terrifying Stick and Spiteful Kitchen Knife. There’s also the satisfying close-combat that has you bloodying and slicing the undead into a properly-dead pulp, a mechanic which hasn’t felt as savage and gratifying since that used in the now slightly old and forgotten Condemned series.

It would also be unfair to claim that absolutely nothing has changed. There’s the addition of hand-to-hand expert John to try out if you fancy just punching zombies to death, and occasionally a new camp defence objective crops up where you fight off hordes of attacking walkers whilst protecting your fellow survivors. The increased prevalence of water alluded to in Riptide’s title introduces a new vehicle, boats, which essentially feel like the trucks but with worse handling and a speed-boost that lets you smash through paddling zombies with ease. Other than that, though, it’s slim pickings as far as any other additions are concerned. 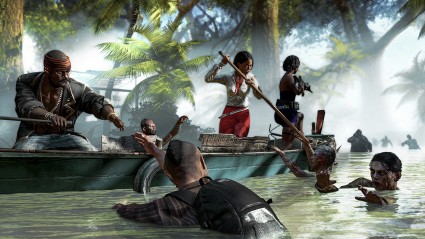 This is, of course, a dramatised promo shot. I’d like to say that boat combat is this exciting-looking, but well, it isn’t.

Dead ugly
After playing the original Dead Island on PC, it came as somewhat of a shock for me to see how the visuals of its sequel compared on the Xbox 360. Now don’t get me wrong; as a fan of multiple platforms I’m fully aware that a game released on the now-aging roster of consoles is not going to look as good as it does on my newly-upgraded gaming PC. I accept that. That’s not much of an excuse, though. Take a look at some of the franchises I mentioned earlier (Uncharted, Gears of War and Assassin’s Creed), for examples of the impressive work which other developers have made in optimising the hell out these seven-year-old machines.

In contrast to these, Dead Island: Riptide looks downright nasty. Not only is there an apparent lack of anti-aliasing used to smooth out those pesky jaggies, I swear that a new extra-aliasing technique must have been developed just for this game. It looks that rough. Naff environmental textures, along with awkward character models that make the survivors look no more alive than the zombies themselves, don’t exactly do the game any favours either.

Of course, the mouldy icing on the already-stale cake is the aforementioned performance issues. These could have been forgiven to an extent if the graphics were pushing the boat out, but instead they look a state. For a developer called ‘Techland’, they don’t really have the technical side of things down. 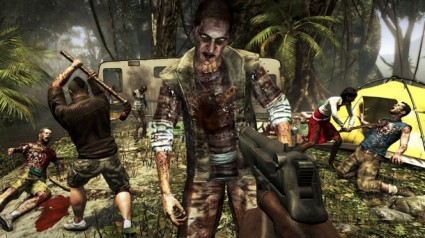 You know what to do: aim for the head!

The squawking dead
Riptide’s audio is capably done at least. The soundtrack, short of being particularly memorable or attention-grabbing, still succeeds in being atmospheric. There’s a mixture of unsettling horror music for the scarier environments and sombre pieces for the survivor camps, which perfectly evoke the bleak and melancholy feeling of humanity desperate for survival.

Ambient sounds effectively place you in the game’s setting, with distant sounds of waterfalls and wildlife helping to craft the remote jungle locale. In juxtaposition to this idyllic audio backdrop are the throaty and animalistic snarls of zombies swarming the once-paradise. The crazed screams of an enraged infected hurtling towards you are enough to make a grown man cower in fear. I would know; I did.

As if the characters needed any more help in being rubbish and unlikeable, the voice-acting is one area of the sound which falls decidedly flat. Its unconvincing and sometimes ridiculous delivery cements the game’s cast as a bunch of obnoxious stereotypes.

Dead company
What’s the best way to improve a game with hit-and-miss mechanics and a non-existent story line? Why, add more players, of course! Four-player co-op returns in Riptide, and as with its predecessor, this is arguably the best way to play the game. The brutal, zombie-slaying action and simplistic objectives are a perfect fit for taking the campaign on with friends.

This is also an aspect where the heavy-handed level scaling works well. Players of very different levels can join up, and the enemies and loot will be scaled accordingly for each player. Shared EXP and money mean that co-operation is enjoyable and non-competitive, so if you have access to online play then I recommend that this is how you spend most of your time with Riptide.

Better off dead?
There’s a good chance that if you’re heading into Dead Island: Riptide, you already know what to expect. The endless undead slaughtering and loot-hunting are pleasingly mind-numbing, giving an experience that’s both addictive and a little bland. No doubt you’ll have fun exploring the island with mates and strangers alike, able to partially overlook many of the game’s flaws as you romp around together clubbing in zombie heads with your Awe-Inspiring Wrench and Formidable Baseball Bat.

It’s disappointing that more wasn’t done with this sequel, as the original created such a good base for progression and expansion. Nevertheless, if more Dead Island is exactly what you want, then Riptide should keep you mostly satisfied and is worth a purchase when it drops in price. It’s just not something I can recommend at full RRP.