As has always been the way with fighting games since the 90s, it’s normal to see several revisions over the course of an iteration’s lifespan. Street Fighter’s done it, Mortal Kombat has done it, and now Tecmo’s Dead or Alive 5 appears to be the latest series to adopt this direction.

The self-proclaimed Ultimate Edition of DOA5 has recently hit stores. Is it a shameless cash grab or is it worth making the upgrade?

The Story Mode included in this Ultimate edition is completely unchanged from the previous versions of DOA5. After the bioweapon clone of Kasumi, Alpha-152, went on a rampage and destroyed DOATEC’s public image in previous games, boss Helena has been trying desperately to rebuild the company and restore the company’s ailing reputation. To help do so, she agrees to host yet another Dead or Alive tournament, but there is a shady presence threatening to ruin things, and Alpha-152 is still missing.

It’s all played out in this lengthy, cut-scene heavy campaign that sees players take control of most of the included roster throughout, as they discover each of the character’s own personal motivations in non-chronological order. The action is big and dumb but definitely fun, thanks to its wacky and sometimes even perplexing direction. The important thing is that it’s a really good training ground and a good way to help you settle on a character. 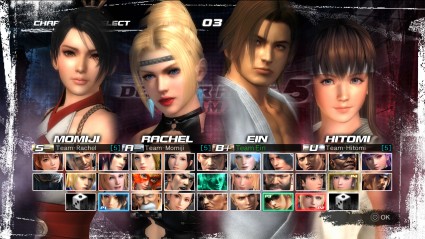 New kids on the block
So what’s new in this Ultimate version? Well, the main thing that people will care about is the inclusion of five new fighters, but there are also new stages, plenty of fixes and tweaks, new entrances and titles. Many of the DLC costumes for DOA5 are also included, and can be unlocked through gameplay.

The new selection of fighters includes returning DOA fighters Leon and Ein, newcomers from the Ninja Gaiden series Rachel and Momiji, and one other added to the list of guests from Virtua Fighter, Jacky Bryant. Each slots into the roster nicely, feeling balanced and different enough from the existing fighters to help freshen things up a bit, and I continue to be impressed at how the Virtua Fighter characters feel right at home in this franchise.

It helps of course when the fighting mechanics are as fluid and solid as they are here and bar a few tweaks and bug fixes, they are totally unchanged. For newly interested parties unaware of how this game plays, it involves a lot of fast-paced, close-quarter combat that only ever leaves you feeling like a martial arts master, even when you’re just hopelessly bashing the buttons.

To simply just spam the game’s two main attack buttons, though, does the game and yourself a massive disservice. This is a deeper, more precise game than it might initially appear, and although whacking the attack buttons with decent timing will result in classy-looking combos, you’ll find it’s a tactic that will only serve you well offline and at low difficulty.

Knowing combos here isn’t the end of your learning either; knowing how to counter, perform reversals and utilise the “Critical Stuns” are paramount to success. In this sense, the defensive game is in many ways more important than your attack; it’s a game where baiting your foe and then punishing them for their lapse is a better option than trying to force an attack against someone that’s adept at blocking and dodging.

There’s nothing better than sidestepping a kick at the perfect moment or pulling off a reversal and seriously pummelling your opponent into the ground, and in DOA, it’s one of the most satisfying feelings when you’re on the right end of it. Fights can turn quickly, though, no matter how in the lead you think you are. A skilled opponent, A.I. or online, can end your round with one seemingly unbreakable string of attacks if you’re not mindful.

Master that ability to punish mistakes and DOA will reward you with enormously quick, tactical fights that look spectacular. When you have two players with all these skills down pat, it’s simply a stunning game in motion, and amazing even just to spectate. 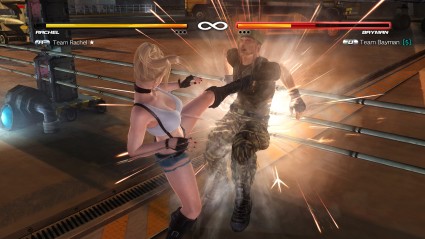 The fights are flashy as hell!

The incredibly well-thought out stage interactions are back from previous versions of DOA5. Kicking your enemy into and around even the simplest elements of the environment adds real impact, but the most extreme will have you performing extravagant attacks, such as kicking your foes into attack helicopters, or bringing down buildings around you. The cliff-hanger mechanic here is also unchanged, allowing you to get in sneaky hits when throwing fighters over certain ledges in the game.

There are some deep training tools in the form of Free Training and the Tutorial, but more useful are the Command and Combo training modes, which are excellent. Both are pretty much the same in principle; you pick your fighter and follow through the vast amounts of input prompts in order, with demos available if you can’t quite nail a manoeuvre. They’re useful tools once you’ve decided on a character you like the feel of, as you seek to polish your skills.

Girls gone wild
After only previously playing the Vita version of Dead or Alive 5, I was pretty surprised at how similar this home console version looked. That’s partly a testament to the power of the Vita, but in some ways a comment to the old-fashioned design philosophy of DOA. Characters look blank and slightly plastic and, as usual for this series, there’s a large focus on sexualising its female vixens in the most shallow and juvenile of ways. You’re either going to be able to look beyond that and see the quality mechanics behind it, or you’re not. You likely know which camp you’re in already.

Besides that caveat, it’s hard to deny that the game looks great in motion. Animations are remarkably fluid as combos flow with a quick elegance and grace. There are some sweet little touches on display too, as fighters begin to sweat and get dirty over time, and show other visible signs of damage. Weather can be a factor too; in one of the snowy stages I found that the longer the fight drew out, the more the snow and ice would build up on my character’s clothing. Impressive.

Talking of stages, there are a few more included here and they fit in well with the existing selection. As with the original arenas, they’re truly the visual highlight thanks to many moving and interactive parts, and the incredible stage transitions as you damage elements of the arena. In hitting these sweet spots, these transitions can become dangers in their own right, especially with hazards like falling debris after pulling down a construction site, or the obvious dangers within a warzone.

Beat down
The soundtrack here totally fits the arcade nature of the genre, and there’s a very wide selection of styles that you can tailor to suit your aural preferences. There does seem to be a slight focus on heavy, faux metal and hip-hop, but once you get into the fights the tone can turn from deadly serious to ridiculously cheerful and whimsical at the drop of a hat.

The voice-acting is, frankly, utterly terrible, but it’s also completely charming in spite of itself. I think we’re beyond the days of putting this down to cultural difference now, especially here where it feels entirely deliberate, but it fits the world that Team Ninja have created. 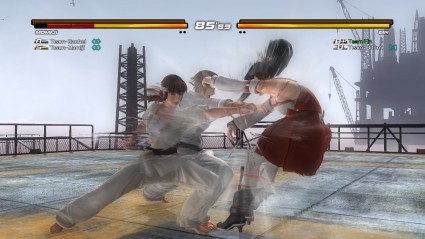 Quiet Fight Club
Once again DOA offers a solid online component, but sadly it all seems a bit eerily quiet at the time of review. I literally sat for an hour the night before writing this, trying to find an opponent using a wide variety of settings in both Ranked and Player matches, and sadly there was no end result. On the rare occasion that I have found myself in a match prior to that, I’ve had no real issues with lag to report.

The big new thing in this version is that players can now play 2v2 Tag matches online, while the Tag matches themselves have some new rules. The amount of health that the non-active fighter can accrue while resting has been nerfed slightly, while a new Force Out mechanic operates similarly to systems seen in MvC3, where your active player is kicked off-screen and replaced by your reserve for a short period of time. Unfortunately, I’ve been unable to get any hands-on time since starting the review process, but if you’re part of a community or have friends that enjoy this game, I can only assume that it’d be good fun.

Dead man walking?
Dead or Alive 5 Ultimate proves once again that DOA is an excellent fighting game that’s easy to pick up but satisfying as hell to learn and master. When I played it on Vita a while back, I said it was the most fun I’ve had with a 3D fighter for quite some time and that still stands with this new version.

That said, if you already own Dead or Alive 5, you’re looking at a full price upgrade with mostly only superficial changes, and if you’re not really hurting for the five additional characters, then you can pass on this and not really miss out. If, however, you’ve never played DOA5 and have been waiting for the perfect time to give it a go, then this is the most complete version you can buy.