I’m finding that an awful lot of my reviews start with an admission of ignorance, and this review’s no different. I’ve never played a Disgaea game before and had no idea what to expect. After doing a bit of Googling, it looked like I was about to get involved with something similar to Final Fantasy Tactics. Great news – I love Final Fantasy Tactics.

You know what else I love? Meaningful and well explained systems that compliment each other. Engaging stories that involve interesting characters. Varied and challenging gameplay that doesn’t turn into a total grind. It’s because of this that I found it really hard to enjoy Disgaea 5.From the beginning you’re dumped into a world where little is explained, though you soon start to piece a few things together. The setup is that Disgaea 5 takes place in a universe full of Netherworlds; small planets that are unique from each other and each planet is ruled by an Overlord. These Netherworlds are under attack from an evil guy called Void Dark and you soon create a rebel army of Overlords who want to stop all of this.

It’s an interesting setting and there’s some cool character designs. The peg-legged penguins called Prinnies are adorable and the Overlords all look unique. The Overlord’s personalities and the story itself are far less unique. If you’ve played any JRPG or watched any anime from the last two decades, you’ll have seen what’s on offer here: A loner that hides a tragic past, an evil enemy who might just be misunderstood or under the control of an even greater power.

Making this worse is the fact that the story takes an absolute age to complete. Whilst it’s interesting to see the plot structured in an anime fashion, with eight missions or so comprising one ‘episode’, it doesn’t do enough to make the pacing interesting and even takes the anime styling too far by having utterly pointless filler episodes. There’s a straight-up ‘episode’ revolved around getting back some stolen curry. Never mind the evil empire destroying the universe, there’s curry missing! 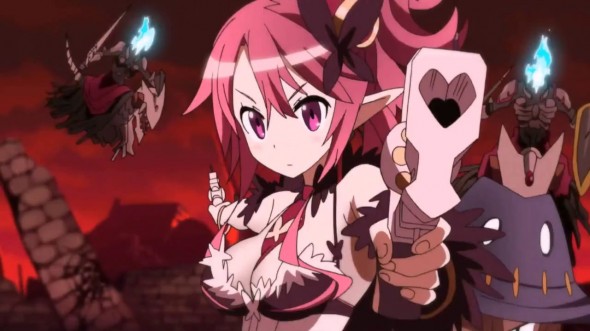 Don’t mess with her curry.

Each episode ends with a ‘Next time, on Disgaea 5’ vignette. These are pretty charming, as they’re delivered by different characters and in different styles each time but it didn’t stop me wanting to race through it all as quickly as possible.

Whilst there are some instances where you can use the environment to your advantage, by having enemies get poisoned by a mushroom or by flicking switches that cause tiles to harm whoever’s standing on them, it’s mainly about who has the higher level. Which isn’t fun at all. 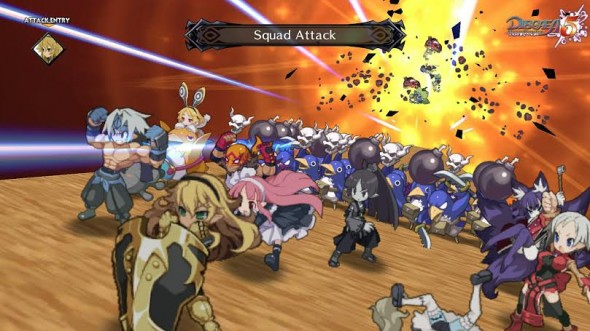 This looks powerful – let me check the numbers first…

To help you level up your army and your team, you’re given a ton of different systems to use. You’ll be allowed to create different squads, call an intergalactic senate to vote upon different bills and ‘enter’ your weapons and grind through procedurally generated dungeons to level up the items.

None of the above is made up. These are all systems that exist within the game, they’re all poorly explained and they’re all designed to make your stats larger. All of these systems are convoluted and all offer minimal improvements to your characters and they in no way alter the way you play the game. 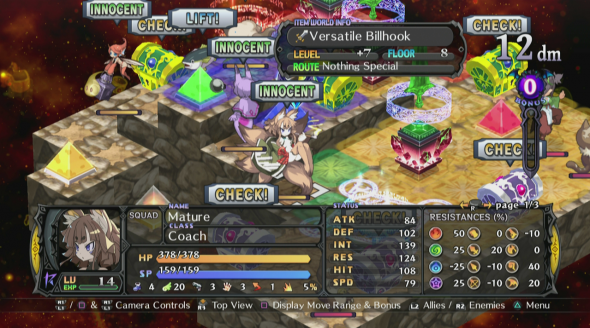 Can anyone tell me what’s happening in this screenshot?

The thing is, all of it can be ignored and that’s really the best way to play. I spent some time researching how people actually play this game and it looks like everything’s focused on ‘making the numbers bigger’. What’s worse (better?) is the fact that Disgaea 5 is aware of just what a grind it is because a massive exploit has been totally ignored. If you’re finding your numbers are too small, you simply need to use items 8 times to gain a level. That’s it. Use any item eight times and you go up a level, no matter what.

What’s left is a tactical RPG that loses any form of strategy and becomes a total number crunch. Increasing these numbers descends into doing nothing more than swigging potions and fighting through badly documented systems that are boring to interact with and offer minimal impact. Your reward is a cliche-ridden story, some cool looking characters and hours of your life being sucked away.

If I want to see numbers grow, I’d rather play Cookie Clicker and if I want a tactical RPG I’d rather play Fire Emblem. I simply can’t see the appeal. I’m saying avoid. As always, it’s up to you.