Dragon Ball XenoVerse is a love letter to fans of Dragon Ball. It’s not even really for just casual fans; it’s for the hardcore fans that have watched Dragon Ball Z in its entirety and are intimately familiar with its characters and story. Right out of the gate, XenoVerse welcomes you into a narrative that is well underway. If you are unfamiliar with what happened on the show you will be lost, and nothing in the game will make an effort to help you find your way.

XenoVerse is the first Dragon Ball game I’ve played that allows me to do almost everything I’ve seen on the show. The original voice actors make the world feel alive, environments are destructible, and nothing seems out of place. Your character can fly, fire power blasts, disappear and reappear somewhere else, team up against enemies, and you can turn Super Saiyan. Well, you can turn Super Saiyan if you happen to be a Saiyan. In XenoVerse you create a custom character from a choice of five races and embark on a part action RPG, part fighting game. 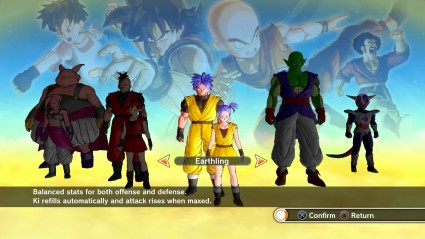 Choose from five races to create your fighter.

At first I did not think it was very technical from a fighting standpoint, but after many hours I’ve come to accept that there is definitely a real fighting game in there somewhere. You can see three enemies in the distance, lock onto one of them and engage in a one-on-one fight, in mid-air, while at any moment another enemy can also attack you or your allies can attack the person you were fighting in the first place. That may sound like every action game ever but there is something strange, chaotic, and wonderful about it happening in mid-air and on multiple planes. One attack can knock an enemy to the other side of the area, such as the opposite end of a canyon, and then everyone has to fly over there to continue. The fight can continue in the air or move to the ground, or even go underwater. XenoVerse definitely feels more like Dragon Ball than any game before it.

It also looks more like Dragon Ball than any other game. The cel-shaded design of the world and characters looks, in my opinion, better than the actual series at times. I would gladly welcome a new series with the look of XenoVerse. The attention to detail is amazing and it really feels like you are a part of the Dragon Ball world. 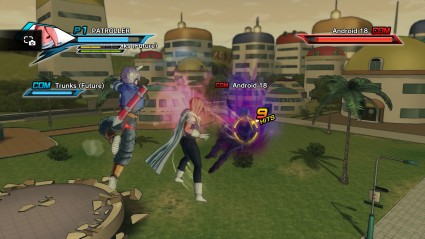 There is a lot going on right now.

I’ve been a fan for 20 years, so every time a new Dragon Ball game is released I expect to play the same stories again. Not this time. The story in XenoVerse is that two new characters are going back in time to disrupt the events from the show. So the narrative is actually that you, another new character, are summoned through Shen-Ron, by a grown-up Trunks who leads a group of Time Patrollers who are tasked with protecting history. Every battle in the campaign is one from the series but with variations caused by the new antagonists.

These changes are often small, such as creating more powerful minions, but some events are a lot of fun – having you switch bodies with Captain Ginyu in an effort to save Goku, or fighting a powered-up Mr. Satan. The events can even take place out of order (you fight in the Cell Games before meeting Android 17 and 18), which provides additional novelty. It is a lot of fun to play through the best battles in the series, but this time with a twist that makes you feel like what you are doing actually matters.

In addition to the campaign you can take part in patrols that are different versions of the same battles, with other variables changed. These patrols are not strictly required, but you ideally do need to complete them in order to gain enough experience points to upgrade your character’s attributes. You can complete these offline on your own, or online where you can team up with other patrollers in groups of up to three. Most missions have pre-selected allies, sometimes good guys, sometimes bad guys; but most of the time you can choose any character you’ve unlocked. In addition to co-op, you can battle other players online in up to 3 v 3 matches. 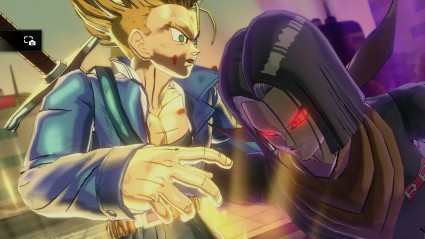 Remember the time that a red-eyed, purple-glowing Android 17 killed Trunks?

While I understand why XenoVerse does not explain the story events you are revisiting, I do not understand why it barely explains anything at all. The leveling system, the hub world, mentor system, and how to upgrade your gear are all barely introduced, and as such it can be confusing. The hub world is divided into four sections, prompting a loading screen when travelling between them, and it strangely does not allow any of the speed or freedom of movement found in the rest of the game. 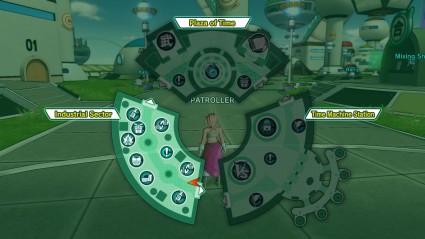 Ultimately it was the game’s uneven difficulty which I found problematic. My party would often get wiped out very quickly, but upon reloading the same level I might find it too easy. There is no difficulty option. The most frustrating levels are the ones in which your allies die much too quickly. Since you have no control over your allies, the randomness of their ability to succeed added with the unpredictable difficulty of the enemies and the glitchiness of sometimes being unable to be on the same axis as your opponent (imagine that your opponent is facing you but you are facing the floor or sky, missing every attack), made the game more frustrating than enjoyable later in the campaign.

Overall, I think that even the most diehard Dragon Ball fan will find a lot to complain about in Dragon Ball XenoVerse, despite how many things it does well. Non-fans will find little to enjoy here but I think every Dragon Ball fan should at least give it a try.