Perhaps the biggest gaming event of the year is happening in Germany right now. Here is a recap of Microsoft’s Gamescom Press Conference.

Microsoft’s Gamescom Press Conference opened with a low-key trailer of Assassin’s Creed: Unity that showed more us more of Paris and its inhabitants than anything else. Nothing new here but the world Ubisoft has built continues to impress me.

Then, Phil Spencer came on stage and promised the world that Xbox One is “the best place to play.”

A FIFA 15 Europe-exclusive bundle was announced and Peter Schmeichel came on stage on to build his Ultimate Team in the new… Ultimate Team feature.

The next segment was dedicated to ID@Xbox, Microsoft’s indie game initiative. A reel showed off a few surprises including Threes!, Goat Simulator, and the third-person MOBA Smite. We got to see extended looks at Space Engineers, SuperHot, The Escapists and Below. The phrase “first to console” was used repeatedly so expect most of these hit PS4 eventually. Of course, many of these games are already available on PC. We were reassured that “hundreds” more ID@Xbox games are on their way. 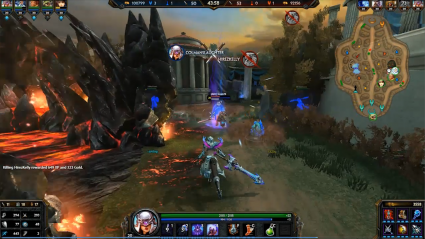 The MOBAs are coming!

Sledgehammer Games showed off a new level of Call of Duty: Advanced Warfare called Collapse and the Assault-type exo-suit. The gameplay included an intense car chase with aerial fire taking out other vehicles left and right. After a scripted car crash the action continued on foot along the Golden Gate Bridge in San Francisco. The new exo-suit allows players to boost jump high enough to hop onto a cargo container. We also got to see homing grenades that float in the air as they calculate a target to pursue and a device that tags all enemies in the area. There were lots of explosions at the end too.

The CoD segment concluded with the announcement of another bundle: a 1TB CoD-branded console with a digital download of Advanced Warfare. 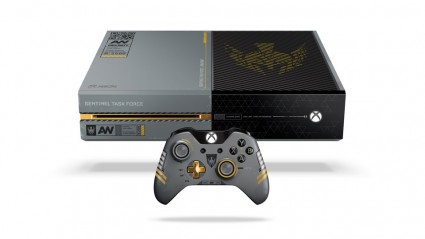 Evolve has been pushed back to February 2015 so today it was announced that Xbox One will have an exclusive open beta for the game in January. We also saw the end of a match on a new map called Distillery. The Kraken won.

It was then Phil Harrison’s turn to come on stage and he promised to use the word “exclusives” repeatedly… and he did.

We finally got to see Quantum Break gameplay and we can confirm third-person action with time manipulation. I was very excited by the reveal trailer at E3 2013 but today’s demo showed me a very dark, dull world with a seemingly generic protagonist and very slow action. It seems that you are unable to take out enemies by simply shooting them and apparently need to use your powers on them first. I saw no creative use of these powers in the footage shown. This was my biggest disappointment of the event.

The lengthy and underwhelming Quantum Break demo was followed by a new Fable Legends trailer and the reveal of what seems to be a futuristic rollercoaster simulator called ScreamRide.

The Rolls Royce Wraith and FIA Formula E were announced as being available today as DLC for Forza 5 and we got an in-depth look at the online and offline social gaming aspects of Forza Horizon 2 including the use of Drivatars and seamless open-world transitions without lobbies.

A live demo of the unbelievably gorgeous-looking Ori and the Blind Forest showed a vertical level with rapidly rising water that ended abruptly at what appeared to be the beginning of a boss fight with a giant owl.

A new video for Sunset Overdrive was shown and a white Xbox One bundled with the game was also announced. That’s the third of three bundle announcements from the event. 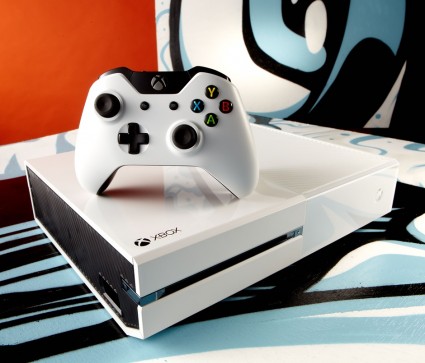 The Sunset Overdrive bundle comes with a white Xbox One

Finally, a lot of Halo: Master Chief Collection was covered. In addition to Halo 1-4, the game will include the Halo: Nightfall live-action series and a three-week Halo 5 multiplayer beta in December. Some Halo 2 Anniversary footage was shown, and it continues to impress. A fourth remastered multiplayer map was revealed: Sanctuary. It was also announced that the multiplayer ranking system for the Master Chief Collection will be skill-based and identical to Halo 2.

The event wrapped up with confirmation that Pre-Order and Pre-Download is coming to Xbox One.

You can watch the event in its entirety here.

What announcements are you excited about? What are you looking forward to see more of?