I’ve never been too keen on zombie games. I’m a casual fan of Call of Duty but stay clear of the Zombies mode, and even the very popular Left 4 Dead doesn’t particularly float my boat. I can’t put my finger on why, but I rarely feel much more than apathy over most titles featuring the shambling undead.

Dead Island did not buck this trend: after a little while repetition started to set in, and I found navigating the map a chore. On reviewing its sequel, Riptide, I discovered the same problems. The flawed level scaling of the enemies left progression feeling meaningless too, as the zombies actually seemed to get tougher as you levelled up.

You’d expect that Techland’s next zombie game, Dying Light, would foster the same lack of enthusiasm in me. I’m pleased, and surprised, to say that it’s a very different story.

Not that the premise is too dissimilar to your average zombie apocalypse. The outbreak of a virus has turned people into crazy rabid creatures, and the threat has been quarantined within a Middle-Eastern city called Harran. The Global Relief Effort, or GRE, airdrops supplies for the benefit of any survivors still trapped in the city, including Antizin, a drug that keeps zombification at bay for anyone already bitten and infected. The player assumes the persona of Kyle Crane, hired by the GRE to work undercover in Harran and find Kadir Suleiman. Nicknamed ‘Rais’, he’s a rogue politician who leads a gang of bandits and threatens to release a sensitive file to the public which the GRE would rather keep a secret. 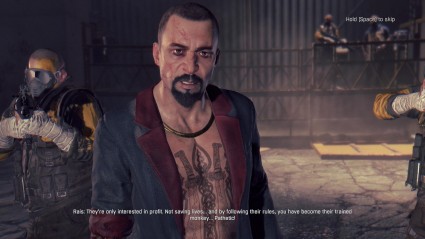 He’s the baddie – who’d have thunk it?

Even though it’s hardly the most original or creative plot ever devised, it’s perfectly lucid and serviceable at bringing a sense of purpose to the proceedings. Characters are likeable/hateable enough, if a little flat and caricature-like. The evil Rais, for instance, will happily shoot someone in the head without a second thought in order to prove a point, or probably just because he’s bored.

After just a few minutes spent bashing zombies in the city of Dying Light, Techland’s heritage is very clear. This is no bad thing. One thing Dead Island got right was the satisfying combat, with a multitude of varied, customisable weapons that degrade over time. These concepts have been carried over, with an extra focus on unarmed skills, like grapples, elbow-bashes and tremendously satisfying dropkicks. No exaggeration, they are perhaps the best dropkicks I’ve seen in a video-game.

It’s safe to say that the ‘new generation’ of consoles hasn’t exactly revolutionised much so far, but one common theme has been movement. Titanfall, Sunset Overdrive, Call of Duty: Advanced Warfare – these have all augmented the typical third-person and first-person action shooter formulas with more freedom and responsiveness in level traversal. Dead Island was a bit of a trudge moving from area to area if you couldn’t secure a vehicle, but Dying Light has a brand-new trick up its sleeve.

On arriving in Harran you take shelter in the Tower, a large block of flats which is a haven for survivors. The Tower is lead by Brecken, a former parkour instructor who teaches his skills to other survivors in order to create a team of ‘runners’ who go out and collect supplies. It’s from here that you learn the art of freerunning yourself. This one feature dramatically improves how much fun it is to travel and explore the city of Harran. Unlike so many open-world games, it’s actually a pleasure to move across the map from quest to quest, running and leaping across slum house roofs, fences and sewage pipes. To start with, you’ll clumsily scramble over obstacles and tire easily, but from naturally practising parkour you’ll level up your agility skill and be able to scale heights quickly with ease. 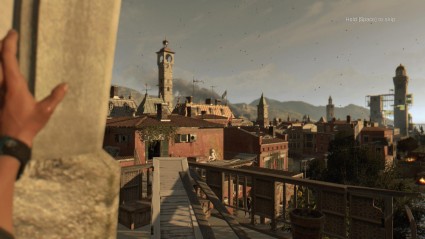 If the rooftop-running reminds you of Assassin’s Creed, just wait until you reach Old Town.

This levelling system is another aspect which Techland have worked on and improved – I’m sorry to make so many comparisons to their earlier works, but Dying Light is very much Dead Island Without The Island. You have three independent ‘levels’ and skill trees – Survivor, Power and Agility – built from experience points for completing missions and helping survivors; attacking and killing enemies; and the aforementioned freerunning. Each tree is chock-full of useful abilities, like traps, extra combat skills and increased health, making every level-up feel meaningful. To complement this, rather than the infected levelling up evenly with you to negate any sense of progress, the ‘grunts’ as it were remain as cannon fodder whilst the amount of ‘special’ zombies increases.

Any Left 4 Dead veteran will find these special mutants a tad familiar. There are spitting creatures that projectile vomit at you with putrid green slime; boomer-like exploders; and tougher tank zombies that pack a punch and take a lot of hits to be downed. Make too much noise and recently-turned ‘virals’ will head your way, with higher speed and tenacity than their more heavily-decomposed brethren. It’s a varied pack of face-chompers all-in-all, but that’s just the daytime staff…

You see, it’s called Dying Light for a reason. Operating on a day/night cycle, most infected are quite placid during the daytime and will only try to rip you apart if you get too close. As the sun goes down, however, all hell breaks loose. Dying Light is not typically very scary compared to traditional survival horror games, but it’s at night time where you’re more likely to be screaming like a Swedish YouTuber. You can take the easy way out and spend the night in a safe house, but naturally some missions can only be completed in the dark. You’ll also receive double Agility and Power experience points, plus bonus Survivor EXP for lasting the night, creating a perfect risk/reward system.

Like any typical AAA open-world title made in the last few years, Dying Light is not short on things to do, for better or worse. There’s a sizeable main story; countless side-quests; challenges to complete; people to save; loot to gather and collectables to find. Much of the missions can be boiled down to fetch quests and eradicating the infected – you’d be wise to dine lightly on the side-quests for fear of sinking into monotony. That said, the undeniably solid combat and parkour mechanics make it easy enough to be entertained throughout. You’re also sure to feel like you’ve got your money’s worth, taking anywhere between 20 and 40+ hours depending on how much of a completionist you are. 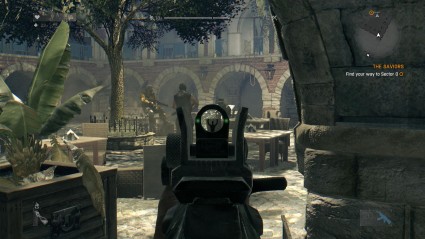 Some of your opponents will actually still be living, believe it or not.

All of this content can be experienced alone, or with up to three comrades in co-op. I’m not sure what this says about me as a person, but I’m wont to ignore cooperative play much of the time. Yet in Dying Light it’s done so well – surprisingly so in fact – that you’d be missing out to not at least team up for a few missions. Once you flick the ‘public’ switch, other players can seamlessly drop in and out. Whilst working together on quests, you can fast travel to a buddy who’s waiting at the objective to avoid wasting time. To spice things up a bit, Dying Light throws challenges at you – reach the top of the tower first, kill the most zombies – which adds a wonderful bit of competitiveness into the mix. It’s all admirably thought out.

One side-effect of playing Dying Light cooperatively, however, is that it completely changes the tone of the game. As a single-player experience, it creates a potent atmosphere. Harran is a hauntingly beautiful setting, full of derelict buildings, overgrown foliage, makeshift safe-houses and abandoned cars from attempted evacuations. The noise filter gives a grainy, filmic effect, and whilst the city has a subtle muted haze during the daytime punctuated by golden sun shafts, after-hours it becomes almost entirely bereft of light – it’s actually quite rare to see a night cycle so truly pitch-black. Exploring Harran in solace feels engrossing and bleak, but as soon as you get some chums joining in, this dynamic is flipped on its head. Not that this is necessarily a bad thing; it’s just more light-hearted and harder to take seriously. 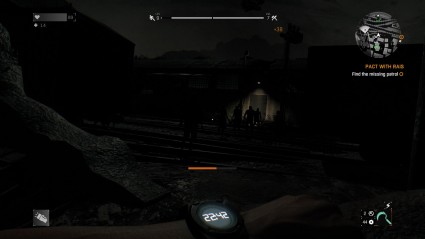 Should have eaten your carrots.

One final note: after the utterly disastrous reputation soiling that the industry suffered last year, I’m pleased to say that everything works. On PC I found the framerate to be somewhat uneven but never unplayable, and I didn’t encounter a single crash or fatal error. It’s well-polished, save for the occasional and expected open-world quirk like a vanishing enemy or momentary A.I. brain-fart, and networking is consistently stable. Gold star, Techland.

Dying Light, or how I learned to stop worrying and love the zombie

Dying Light is many things. It’s Assassin’s Creed; it’s Fallout; it’s a less rubbish Dead Island. It’s a load of triple-A tropes, B-movie sensibilities and C-grade writing. Somehow, though, it’s more than the sum of its parts. Without the frankly brilliant parkour, getting around would be a chore. If the combat and weapons were not so varied and customisable, bashing zombies would grow thin quickly. The skill trees and range of abilities and upgrades gives more meaning and progression to exploration, combat and braving the night. Everything complements each other perfectly.

The main plot is less than fantastic, but in the grand scheme of things this doesn’t matter too much. The way Dying Light truly tells its story is in the rich atmosphere of its post-apocalyptic setting and its moment-to-moment gameplay. If there’s one criticism, it’s that by the time you’re a martial arts master, accomplished athlete and have built up an arsenal of guns, electrified swords and flaming clubs, you start to feel a little too powerful. No need to worry though – a patch has just been released, including a new Hard mode. Problem solved!

To be honest, Techland have well and truly outdone themselves. Dying Light is a benchmark for how open-world zombie games should be made, and is the first game of its kind that I’ve enjoyed in some time. Excluding the revered, story-centric Telltale’s The Walking Dead and The Last of Us, it’s arguably one of the finest ‘zombie games’ in recent memory.