‘If it’s not broken, don’t fix it’. How much do you buy into that maxim? Do you seek games that present brand new ideas that aren’t available anywhere else? Do you bemoan AAA game development for the way it uses cookie-cutter templates to produce games that increasingly share their ideas. Are you tired of Ubisoft’s ‘Climb a Tower to Find Missions’ game design philosophies?

If you answered yes to the questions above, Far Cry 4 is not for you. It’s a game that treads old ground, wears its Ubisoft heritage proudly and never dares break any mould of any sort. It’s also a lot of fun, so you’d be kind of missing out. Kind of really missing out.To its credit, Far Cry 4 does have something original going for it – its setting. Taking place in a location largely based on Tibet, we have the great nation of Kyrat. In Kyrat you’ll be scaling mountains, skulking through lush forests and battling howling blizzards. It’s a great location that allows the developer freedom to throw in a wide array of animals, landmarks and gives us a taste of culture, language and introduces characters that we don’t get to see very often in video-games.

This original setting sadly gives way to a story that we have seen before – a maniacal dictator and a group of freedom fighters do battle to control the land of Kyrat. In fairness, the story does play with issues such as ‘progress vs. tradition’ and how power corrupts, but it never goes anywhere particularly interesting. Most tragically, it never does much with the great characters it introduces. 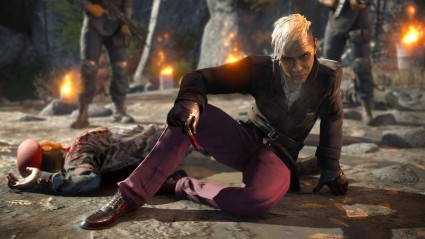 As dapper as he is dangerous.

The best of the bunch is Troy Baker’s Pagan Min. Pagan rules with an iron fist but the fist is covered in a rhinestone glove and has spritzed itself with a particularly lovely cologne. As ruthless as he is stylish, Pagan is on par with Far Cry 3’s Vaas in terms of scene-stealing moments but, as mentioned, is underutilized. Aside from the opening moments, a couple of mid-game cut-scenes and the ending, Pagan is relegated to delivering his pithy one-liners and attention-grabbing speeches through a walkie-talkie and doesn’t grace the screen half as much as I’d have liked. In a world of a Kevin Spacey robo-army, big-corporation bad guys, Pagan Min and the rest of the assembled cast really stand out.

Helping the characters and locations stand out, however, is an impressive level of graphical fidelity. Foliage sways in the breeze and snow storms cloud your view. The animals of Kyrat will make you feel bad for skinning them with their high-res dead-eyes, and Pagan Min’s soldiers will explode into detailed giblets when hit directly with a grenade launcher.

All of this visual power wouldn’t be for much if the world was boring or if your tasks weren’t exciting. Luckily, for the most part, the country of Kyrat contains varied locations that have an air of history to them, which only encourages you to explore more and is absolutely littered with quests to complete and items to find.

These items and quests aren’t just placed neatly on the side of the road though, you’ll need to wander off the beaten path and carry out some tricky treks. You’ve got standard vehicles to help you get about the map such as cars, quad-bikes and trucks, but there’s also a lot of fun to be had in hover-boats and the hugely enjoyable ‘Buzzer’ – a sit-down, one-person helicopter type… thing. 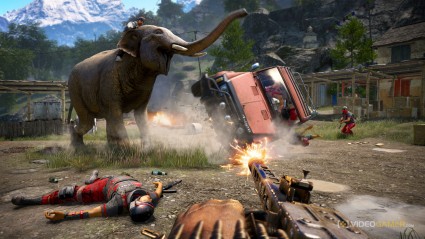 Cars don’t offer a sanctuary. Nothing in Kyrat is elephant proof.

There are also moments where you’ll need to get out of your automobile and sling your grappling hook onto pre-defined and well highlighted ledges. This works well and gives a real sense of ‘verticality’. You’ll need to climb radio towers to unlock and discover missions (this is a Ubisoft game after all), you’ll need to scale cliff-faces to reach ancient artefacts, and you’ll also want to reach vantage points to help you plan out attacks on heavily guarded outposts.

Of course, you could just run into your mission all guns blazing, you could snipe off a few enemies before finishing off the last few guards with a pistol, or you could even skulk about in the overgrowth and let your knife do the talking… and stabbing… and murdering.

That’s the real beauty of Far Cry 4’s combat and what makes the somewhat repetitive missions so enjoyable. Yes, there are loads of outposts to take over and a lot of missions boil down to ‘kill this person’, but you’re given the freedom to approach them in your own unique way that helps nullify the feeling of ‘didn’t I just do this’? It’s great to be able to plant elephants full of C4 charges and have them bulldoze their way into a crowded enemy position, but so too is distracting guards with a thrown rock, only to lure them to a secluded position from which you stealthily take them out. 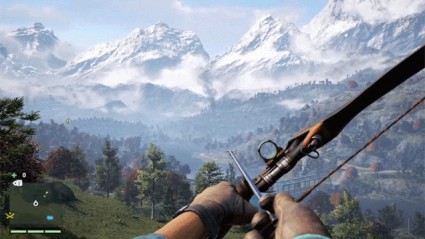 When seeking high-ground goes a little too far…

Of course, you don’t start the game with everything unlocked. You’ll need to earn extra health slots, upgrades to reload speeds and the ability to takedown the larger enemies, but all of this can be gained through experience in the varying side-quests that absolutely swamp the map. These side-quests do well to break-up the main campaign missions and offer some variety to what’s normally just a whole lot of shooting and killing. They’re not groundbreaking by any stretch, but open world staples such as races, item hunts and chases are used well enough.

There are some missions and moments that fall flat. The ‘Shangri-la’ missions that see you hallucinate demons and gives you a powerful ally in the form of a ghostly white tiger, are slow and linear. They completely go against what Far Cry 4 is good at, as does the mission that asks you to escape from a prison, with no weapons.

To be honest, though, the scripted and planned moments of Far Cry 4 aren’t really its main strength. Far Cry’s real strength comes from the random nature of its world and the varied situations it ends up putting you in.

Your best laid plans can be easily scuppered when all of a sudden you’re mauled by a pack of wild dogs. If you’re ever in a pinch, throwing some bait at Pagan Min’s guards can see a leopard come out of nowhere and cause major havoc. Even getting from point to point can be eventful, as rhinos will charge your car off the side of a mountain and you can’t walk more than 50 yards without hearing someone shout “Eagle! Eagle! Help me!”. It really helps make the world feel ‘alive’ and often creates situations that’ll have you laughing at the absurdity of Kyrat’s honey badger problem or running for your life.

As with any ‘AAA’ title released in the last decade, there’s multiplayer. Both competitive and cooperative ,though being honest, I spent not a lot of time in either. Cooperative play is a nice touch as it allows you to create even more mayhem than usual, though it makes things really easy. Considering that Far Cry 4 isn’t exactly difficult to begin with, some people may find that this turns your rampage across Kyrat into even more of an easy ride than it normally is. Competitive multiplayer left no lasting impression on me, though that may say more about my ability to enjoy online shooters than it does about the quality of Far Cry 4’s offering. 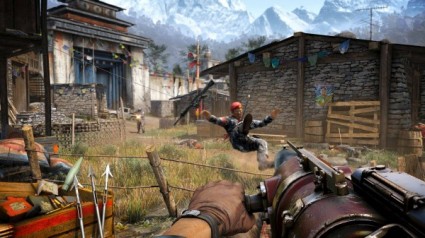 Dying isn’t really a massive issue in Far Cry 4. Except for this poor guy. He’s toast.

The most Ubisoft has ever Ubisofted before

Far Cry 4 is a fantastic game that does nothing new. It feels like a game that has taken its primary components and polished them to within an inch of their lives. The fatigue that starting to surround this genre will probably mean that Far Cry 5, which you know is being worked on, has to be something of a radical departure.

For the time being, however, Far Cry 4 sits at the top of the ‘Ubisoft Game’ totem pole. It offers a great world, brilliant abilities and a  freedom to not just partake in moments the designer’s have created but to also carve out unique moments of your own. If you’re after originality, then move along, if you’re after a damn good time, then welcome to Kyrat.

Just watch out for the eagles.