It’s almost a guarantee that with every new console launch, a version of EA Sports’ FIFA series will be found among the initial software line-up. Traditionally these launch iterations of FIFA are shallow husks of the prior ‘last-gen’ release, admirably built from the ground up but ultimately rushed to make tight deadlines. They’re usually devoid of series-established features, riddled with bugs, and are generally sloppy in production.

Change is upon us, however; as for the PS4 and Xbox One, EA have brought us a FIFA that not only matches the depth and feature set of the previous generation’s, but just about surpasses it in gameplay too.

Although built on EA’s new Ignite engine, FIFA 14 on next-gen consoles plays very similarly to what you may have already experienced on 360/PS3. The general pace is quick and satisfying, complimented by lovely responsive controls. Both moving with the ball and passing around the pitch feels smooth and natural, while player movement with added animations seems more fluid than its last-gen counterpart. This has afforded EA Sports the ability to add some lovely subtle touches, such as players ducking or jumping over teammates’ shots or extra levels of tricky footwork. My absolute favourite thing about how FIFA now plays, however, is that the ball is not glued to the players’ feet; it is almost its own physical object. Just as in real-life, players can lose the ball through over-control or overrunning it, it’ll move in unpredictable ways after 50-50 clashes; it behaves just as a ball should.

What I don’t like, however, is the series’ reliance on preventing you from getting the ball in certain situations, which is prevalent here yet again. You likely know the situation; you’re jockeying to win the ball fairly, stick your foot in and knock it a short distance away from the opponent. It’s anyone’s ball at this point, yet no matter whether you stick with the tackling player or switch to another unimpeded nearby, some invisible force prevents you from getting there first, even if your chosen player’s direction and momentum would dictate that they would tidy up easily. Disappointing. 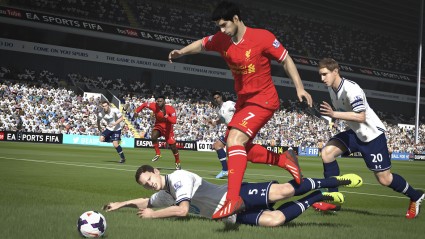 The commentators keep telling me how many this fella has scored in real life.

While not quite as striking in its next-gen visual upgrade as NBA 2K14, the visual improvement in the new versions of FIFA 14 is certainly clear. The extra animations make a world of difference as players turn, burst into runs or shift their weight to receive the ball. Player models are sharper, losing barely any detail when the camera is far back, and the same can be said for the pitch, with much better detail and definition. Although the way the players move and run impresses in general play, the close-up camera shots offer up some horrors. Players are still scarily dead-eyed, and awkward and robotic interactions with each other take away a touch of gloss despite the visuals generally being much better.

The most impressive enhancement, however, comes in the form of the crowd. Models are more varied and detailed, their individual movements more prominent when things are going their team’s way. Score and your fans will become an energetic hive of activity, and it looks utterly fantastic, improving the atmosphere no end. You can tell EA are proud of this, as they’re keen to show the crowd off during every goal celebration, not to mention before and after every match. Score in a difficult away tie and it’s just as satisfying to see your little pocket of travelling support bouncing around, while the despondent home fans stay motionless in comparison. Stadiums finally feel more like a mass congregation of passionate supporters rather than rows of cardboard cut-outs and it’s just brilliant to see.

The match-day presentation is still a cut above its nearest competition. Jeff Stelling introducing; Martin Tyler and Alan Smith commentating; Geoff Shreeves providing ptich-side information on injuries and substitutions; Alan McInally offering updates from other matches (if you’re in a Career): all this stuff goes a long way in making me feel like I’m sat in front of my telly taking in the action on a Saturday afternoon. In the offline modes, this level of detail can make the business end of a season feel all the more exciting, especially when relying on other results to do you a favour.

Unfortunately, the commentary team still tend to repeat themselves a lot, especially when you’re of the mindset to stick with the one team. Still, it’s awesome to hear Tyler and Smith blur the lines between virtual and real-life football, talking about real-life league positions and goal stats as you play (outside of a career or competition modes, at least). It’s total football in this respect.

All game modes – except for the Tournament mode, oddly – make the transition to next-gen, and it’s still a satisfying crop with which to spend your time. This represents my first ever go at Ultimate Team, which I found to be an addictive little mode, combining the best aspects of management whiling taking me back to collecting Panini stickers as a kid. The career modes sees subtle improvements, allowing you to be a manager or a sole player (newly created or existing), though the clean new menu system and layout make it all that bit more user-friendly. 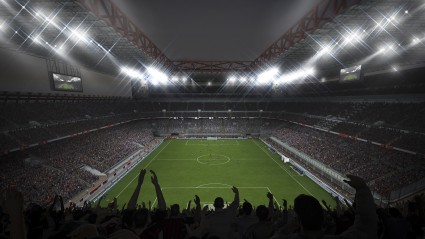 The crowd is very important to the improved atmosphere.

Of course, the online modes are a huge part of FIFA’s appeal and the online implementation is strong once again. Ultimate Team can be taken online, you can set-up clubs and play 11 vs. 11 matches, and all of it works as smoothly as it has in previous versions. You can still play friendlies in ranked and unranked matches, but the better option now is the Seasons mode, which is admittedly where I’ve sunk most of my play time. Seasons allows you to pick any side and get matched against other players based not only on their ranking, but also on their selected team.

This means if you support teams in the lower echelons of world football, you can still play online and avoid playing against the likes of Real Madrid, Barca and AC Milan every single match. It’s not something that cropped up often for me being a Liverpool fan, but this feature means that online matches don’t have to be the all-star affair we’ve grown accustomed to.

A decent mid-season signing?
At the moment, FIFA 14 represents your only option for next-gen football and, to their credit, I don’t think EA Sports could have made a better first attempt. The new Ignite engine impresses heavily on its debut, not only in making everything prettier and bringing bustling stadia to life like never before, but also in polishing and refining an already solid gameplay experience.

On those terms the upgrade doesn’t represent massive strides forward for the genre or the series, but it’s easily the most accomplished football game on the market at this time.