FIFA made a pretty strong debut on the new crop of consoles last year, making decent use of the extra grunt without losing any major features in transition. Despite the new engine, however, FIFA 14 on PS4 and Xbox One only refined an already solid experience, never straying too far from the blueprints of its last-gen counterparts.

This year, however, we see EA Sports take a few more risks and evolve their systems a little more and while, realistically, you’re never going to see a drastically different game as long as the formula is this successful, FIFA 15 feels like a solid, natural progression.

FIFA 15 represents the second current-gen outing for EA’s Ignite Engine, and while many gameplay elements, such as the pace of the ball, shot timing and player weighting remain largely unchanged from last year, movement certainly feels a lot freer.

High-speed runs and tight ball control come a lot more naturally to the right players, while the range and ways in which players can turn and receive the ball makes build up play a whole lot more flexible. In fact, this new freedom, coupled with all the extra animations means that no aimless lump up the pitch or misplaced pass is ever a lost cause. Battle with defenders while you chase a hopeful long ball and you might just get a touch with your head or knee that could put you into a goal scoring opportunity. If a pass goes slightly askew, you’re able to clean up if the situation allows and start your attacking move again.

Usually in those situations – I complained about it last year, in fact – there was always an invisible force field around the ball preventing me from getting there. Though after many hours of play I can’t remember a single moment where this game has purposely held me back in this way, and that’s simply the best improvement made. You can now react with players how they would react and, as a result, scripted events feel… well, a little less scripted. 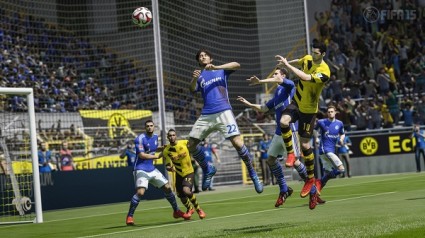 I thought I’d better put in some non-Liverpool screenies, just for balance.

Player momentum too feels much improved; footballers with explosive pace, such as Raheem Stirling or Gareth Bale can seemingly burst into to full speed almost effortlessly, while bulkier players like big Rickie Lambert tend to take a few yards to get into full stride. It forces you to play to players’ strengths and not try break away from defenders using Peter Crouch because, well, that would simply be ridiculous.

Although really only a factor in the single-player modes, players make realistic mistakes, especially when you put them under pressure. A couple of times I’ve been forced wide of the goal, with no options but to take a low, hopeful shot on the off-chance that a player might tap in a rebound, only to see the ball go through or off the keeper’s legs. Other times defenders might spoon clearances; there’s an odd sense of satisfaction that comes from seeing the realism of it, even if it’s frustrating to be on the end of it.

All these things that look like minor changes on the surface leave FIFA with a greater range of possible goals, and thus better captures the unpredictable nature of the real sport, even if quite embellished.

Any complaints I have in pure gameplay terms are the things I’ve been moaning about for years. For example, why are penalties still so horridly implemented? Instead of having your spot kick accuracy determined by power and your proficiency with the analogue stick, you instead need to stop a quick-moving cursor on a meter to determine how true you strike the ball, before aiming your shot with an invisible cursor as your player takes their run up. It’s still as awkward as it sounds and has been crying out for change for years.

FIFA has always been blessed with great presentation though, and with each passing iteration they take steps closer to sports broadcast quality, and their attention to detail is second to none.

As a Liverpool fan, in particular, I really appreciate seeing the ‘This is Anfield’ sign in the tunnel before the players walk out, and I positively love hearing the Kop in full voice, singing the right songs or standing with scarves aloft at the appropriate times. It goes well beyond simple fan service aimed at me, though.

There are so many amazing little touches that in most circumstances will go unnoticed, such as the ref placing the ball in the centre circle before kick-off as the camera pans across the stadium, or players kicking the ball in the general direction of the corner flag or free kick during a stoppage. In replays you’ll see shirts pulled, kits getting dirty, your substitutes’ reactions to goals, grass kicked up during shots and sliding tackles, while general damage to the pitch happens naturally over the course of a match. Score an important goal at home in a packed out stadium, and you’ll see a familiar shake of the camera as the crowd erupts; score a goal away and your little group of fans will be bouncing joyously as home fans look on despondent. It’s tremendously well done.

Still, as we do get closer to total realism with each passing generation, minor visual issues can really stand out. I love that we’re at a stage where we’re beyond dumb cut-scenes for goal celebrations and can see players wheel away into the corner as you would in real-life, but when you do get close in shortly after, you bear witness to some robotic, inhuman animations and obvious clipping.

Context too needs to be addressed as opposition players regularly run to the wrong fans to soak in the glory. Why, for example, would a Tottenham player choose to celebrate his goal with the Kop instead of his own fans? It literally makes no sense.

This lack of context creeps into the commentary too. “A lovely left foot shot” I hear over the replay as my player clearly slots home with his right. “Look at him, he’s delighted!” says Martin Tyler’s sidekick Alan Smith about Raheem Sterling, who in reality couldn’t look less interested if he tried, walking calmly back to his own half. Worse still, the duo often repeat the exact conversation about two different players during the same match. The overall quality of their chatter is indisputably good; it’s just sloppy moments like this totally pull you out of it.

We all know what modes FIFA comes packed with these days and there’s nothing significantly new so I’m not going to into too much detail about the inner-workings, but there are some brilliant little tweaks and additions to established setups.

I’m not fanatical about Ultimate Team by any stretch despite understanding why folks find its mix of team management and sticker collecting so addictive, but I do appreciate the new ability to loan top talent for short periods. This certainly helped make the opening less of a chore, both in terms of my general enjoyment and in the process of dealing with the default selection of mostly second-rate and non-compatible players. 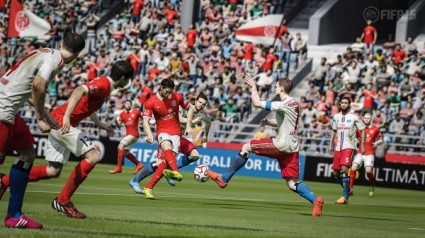 Career mode is where I naturally tend to spend my time over the year because it suits me most as a fan. It’s true, much of it follows prior conventions, but the menu system has seen definite improvement in both performance and functionality, if not so much cosmetically. Things like being able to see your starting line-up and their condition at a glance is simple but brilliant, meaning I know which injured player to take out or who to give a rest before I even have to jump into the team management menu – also simplified wonderfully and now lets you quick-load custom formations and tactics with a flick of an analogue stick. Navigation is so much cleaner now, and I feel like the season moves along a little quicker as a result.

Still, one or two things nag at me, such as the lack of player interaction. As you work your way through your campaign, you’ll receive emails from the board that you can respond to, but when your players come to talk to you, be it to ask for match time or to demand a transfer, you’re unable to respond. I know it’s unfair to expect FIFA to suddenly become Football Manager; however, if such things are this inconsequential, why are they even there? I’d much rather just concentrate on signing and managing the players than having to read messages from them that I actually never have to do anything about.

Online features are typically flawless barring quitters, with a massive range of tournaments and competitions alongside the ‘Seasons’ mode, which of course has superseded the default friendlies in recent years, offering a satisfying sense of progression for one-off matches. You can still create a pro for your offline career and online use, while 11 vs. 11 online matches still never fail to impress from a technical standpoint, with the actual matches requiring good teamwork and positional discipline.

FIFA 15 is another solid effort from EA Sports as they not only provide, in my opinion, a better overall game of football than last year, but one that’s presented with an attention to detail never seen before. Old complaints still ring true, such as inconsistencies with commentary and a bit of the old ‘uncanny valley’ in close ups and replays, but there’s no denying the quality of the fundamentals, nor the range of modes and features on offer.