Having already reviewed one of SEGA’s digitally re-released fighting trio just before Xmas (Sonic The Fighters), it’s fair to say that I haven’t been expecting all too much from Fighting Vipers. It’s a game I never played in its heyday, but I distinctly remember reading about it in CVG back in ’96 and desperately wishing I had a SEGA Saturn to try it out.

Sadly, that scenario never came to fruition, but had I dodged an expensive bullet? Let’s find out!

To Wikipedia!
Obviously, most fighting games have some kind of an excuse to bring together an eclectic cast and Fighting Vipers is no different; however, SEGA’s development team seemingly decided that none of this should be communicated in any capacity throughout the game. Odd.

Suffice to say, that if you head to Wikipedia, you can get a rundown of each character’s motivations, but it’s pretty meaningless. Every box on the fighting game checklist is ticked here though; you’ve got the moody loner, a former model, a rock star, 14-year old skater boy, and the obligatory fatty. Everyone is represented! 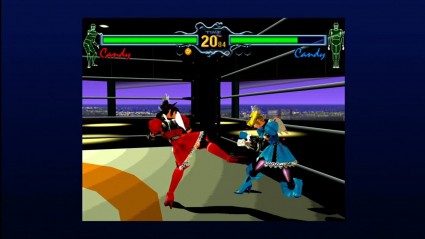 Breaking down the armour…
So, just like the recently reviewed Sonic The Fighters, this is a three-button fighter, with one punch button, one kick and a block, and it follows many of the same gameplay conventions too. This probably shouldn’t have been much of a surprise, as Sonic The Fighters was born as a result of the developers experimenting while working on Fighting Vipers, so it’s natural that the games would share traits.

While I felt that the three-button system hampered Sonic The Fighters in terms of variety, Fighting Vipers fares a lot better thanks to the characters handling more diversely, even if overall it still feels very dated. Tokio, for example, is quick with good reach; while Candy is a close range fighter; and Sanman is slow, but has lethal grabs. The basic attacks and combos are still almost identical and you’re tapping between the only two attack buttons, but at least here, each character handles differently enough to make it worth finding a character that fits your style.

Because of that, the game is a more enjoyable fighter than Sonic’s effort, but it’s still not up there with the best. It’s at least challenging, even on the easy mode, which leaves you actually feeling like you’re mastering something rather than just mindlessly button-bashing your way through. It’s a bit like playing through treacle, though, and other 3D fighters like Tekken have aged much better.

The gimmick that sets Fighting Vipers apart from the likes of Virtua Fighter 2 and Sonic The Fighters is that all the fighters are protected by their preferred choice of sports armour, which can be broken when targeted with the right moves. Say if you happen to destroy a character’s upper armour, they’ll then be weaker if you hit them up top. While it’s a cool idea in theory, the rounds are too short and quick for it to be used in any great strategy. The cynic in me says it’s simply so you can see the likes of Candy and Grace in their bras.

Untouched
Just like Sonic The Fighters, Fighting Vipers is a game that has largely been left untouched and released as it was in its original form, meaning square character models and limited detail all round. The game is bright and colourful, though, and moves somewhat fluidly so you’re never left wondering what’s going on thanks to age or bad visual design.

Its age does raise some interesting retrospective notes on game design in that era, though. All the arenas are ‘caged’, for example, and one of them is essentially a sealed concrete box, yet the light source seems to come from low, beyond one of the walls, creating some jarring shadowing effects. It’s not something you can mark this release down for, because it’s released as was, but it’s definitely interesting and well worth taking stock at how things have progressed since those days.

Arcade hits!
Instead of solely aiming for the stereotypical arcade aural experience of its era, Fighting Vipers has its fair share of guitar-driven rock tracks to compliment the uplifting tones and bouncy beats. It’s all upbeat, with each individual track aiming to capture the spirit of the fighter that you’re facing. While there’s nothing truly iconic or memorable about the music, it helps create the sense of urgency that you need when playing these games. Steady away from the audio department. 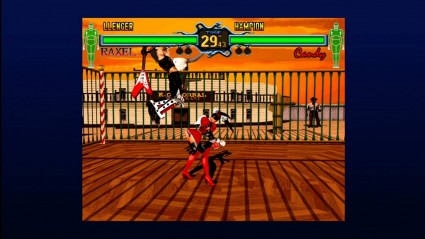 All dressed up with no one to fight…
Sadly, Fighting Vipers is already a dead game online. I tried several times with all manner of conditions to find a challenger, but it seems that it’s already been abandoned. All I can really offer you here is that theoretically you could play ranked matches and player matches if those fights were available, aaand that’s about all I’ve got…

Fighting chance?
As dated as it feels, as an interactive snapshot of fighting games at a particular point in time, Fighting Vipers does hold some short-term value; although, whether it’s actually worth your money is a different thing altogether. As a game competing in today’s marketplace, its appeal is incredibly limited, even when compared to its older (more accomplished) peers.

It does, however, represent better value for money than Sonic The Fighters. At the very least, it will last you much longer than a handful of hours should you wish to continue spending your time with it.

Worth a gander for the nostalgic or curious fighting game fan only. Everyone else should check out the trial before dropping the cash.