The Gears of War trilogy, whether you like it or not, has to go down as one of the stand-out IPs of this generation. It introduced cover-mechanics that are now industry standard and it was one of the first games to make us appreciate what this new generation of consoles could do.

So it’s only natural that Microsoft wouldn’t let the fact that the Gears trilogy is ‘done’ to stop them making another. Heck no. You can’t keep a good game down, especially if their team-mates move next to them and press ‘X’. So, come to the stand, Gears of War: Judgment; we’re about to deliver our final verdict.

A Bunch of Flashbacks: Justification

I know there are some people that are really into the Gears mythos. I mean really into it. There’s books, graphic novels, the lot. For me, I’ve never been that interested in it. A war-torn world that’s busy killing itself is disturbed by a new threat that pops out of the ground. Shakespeare it isn’t.

The story of Judgment takes place before the original Gears and sees you running around with Baird and Cole as well as two new characters: Paduk and Sofia. Much like every other Gears game, it’s not exactly complicated. Your group of soldiers decide to do something (avoiding ‘spoilers’ here, but honestly, it’s a Gears game…) that gets them in trouble. So much trouble that you end up in a military tribunal facing charges that could see you shot. Crikey.

It’s a touch ridiculous, but that only goes in the game’s bombastic favour. Any subtlety with the story or characters would just be wasted and lost amongst the chainsaw-guns and explosions. Every character is more of a caricature than someone to be empathised with: the smart army cadet who plays by the rules, the Eastern European hard-as-nails potential spy, the Colonel ready to ‘throw the book’ at a group of loose cannons.

It’s this tribunal that gives way to how the game actually plays out. Through a sequence of flashbacks, you’ll hear each squad-mate’s recollection of events, with you taking turns playing as the different characters. 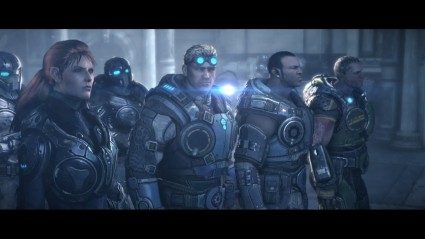 Like the previous games: Similar
Not that changing characters changes the way you approach the game. This is the same Gears that you’ve played before.

Take cover, blind-fire, E-holes. You know how it works. If there are new weapons in the game, they didn’t stand out to me. I honestly can’t think of any new feature within this title. Putting it simply, this is a Gears of War game that plays like a Gears of War game. If you want to see that as a positive or a negative that’s down to you. For me, I wanted something new. This want was partially quenched by the main campaign’s neatest feature.

Within the main scenario are ‘Declassified’ objectives that exist within different sections of the levels. They fit into the story really well, with the reason behind them being that as each defendant is giving their side of the story, more details about your fight are coming to light. Details such as “we’d run out of ammo”, “they had one-shots” or “we only had shotguns left”. 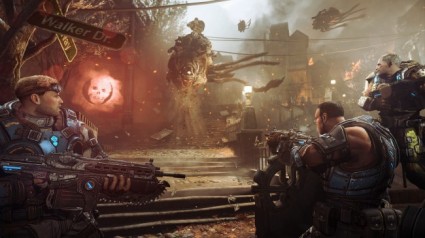 These ‘Declassified’ objectives are the real highlight of the game for me. As mentioned before, this is the third time we’ve been on the Gears ride and anything that forces you out of your comfort zone or gets you to play the same game in a different way is only a good thing.

They soon start reusing ‘Declassified’ objectives though. Relying on simply throwing more enemies at you (“there were a lot of Grubs, sir…”), it’s a real shame that this idea runs out of steam a little too quickly. It’s also a shame that the game contains two story ‘campaigns’ and yet this ‘Declassified’ feature is only present in one of them. Completing these objectives does very little for you, only really allowing you to earn an achievement or two and boosting the number of stars you get for each section.

Stars? That’s right; each area of the campaign will give you a point score and will give you a rating out of 3 stars. This doesn’t really do anything; it’s just there to promote replaying the levels, which is handy given the length of the two campaigns. 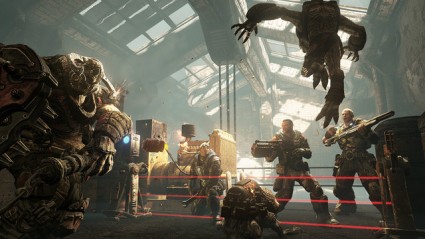 I’m dead serious that a ‘campaign’ has been built around this flimsy piece of story. Keep in mind that the Aftermath campaign, as mentioned, contains no ‘Declassified’ objectives and it doesn’t give you any stars either. Pure. Filler.

Missing from both of the campaigns are any large-scale set-pieces. No submarine rides, no riding of giant monsters, nothing. It’s all straight corridors, survive waves and shooting snipers. A bit of a let-down considering the treats that we’re used to receiving from Gears’ campaigns.

As good as ever: Shiny
The game’s presentation is fine. Remember what Gears 3 looked like? Well now you know what Judgement looks like.

In its defence, with this being a prequel and the world being a little less destroyed, there seems to be a little more colour within the environments. As this is all taking place so soon after the emergence of the Locust, the areas you’ll travel through appear a little more like lived-in buildings and not grey rubble. An abandoned victory parade sticks out in my mind as the highlight of the locales you’ll traverse. 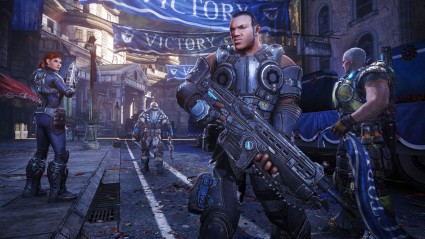 This is what passes for ‘colourful’ in the Gears universe.

Explosions, blood-splatter and clouds of dust will fill your screen, making the game an extremely busy looking title. When playing in split-screen co-op, you can see the 360 struggle with a few frames, though it’s nothing game breaking and is pretty forgivable as these issues aren’t present when playing solo.

One liners & explosions: Kaboom!
Booms and explosions pretty much sum up the audio of the game. You’ve still got that guitar chord that plays when you clear out an area, but other than that it’s difficult to think of any other music worth mentioning.

Voice-acting is worth touching on, I guess. The same actors from before reprise their roles, for what that’s worth. They’ll be spouting one-liners throughout the fight, though it’s all cliché-ridden nonsense. This isn’t necessarily a bad thing, with the game as a whole being more of a tongue-in-cheek action flick. Deep character-driven moments full of voice-acting designed to pull at the heart-strings isn’t really going to work. That’s why you’re left with jokes, whooping and a good dose of hollering.

Shoot people instead of AI: Competitive
You may have gathered that the single-player component of Judgment is a little slim and a little bit too close to what’s been done before. So how does the multiplayer fare?

Well, it’s got some new features in it, which is good news. ‘Overrun’ is essentially a team-vs-team mode where you take it in turns to defend or attack an E-Hole. If you’re defending, then you’re playing as humans with different classes. 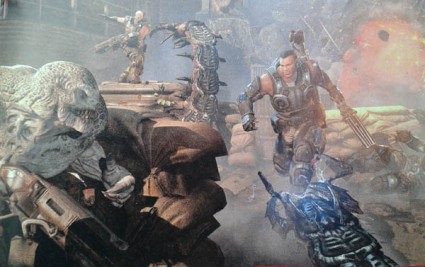 Multiplayer’s pretty classy. Get it? ‘Classy’.

Soldiers drop ammo, engineers drop turrets, medics drop health-regenerating grenades and scouts throw beacons that highlight the enemy. All have their strengths and it’s going to take a balanced team to survive the Locust onslaught.

The Locust, who are attacking the E-Hole to open it up, also have their classes. These are the most involving, similar to the zombies of Left 4 Dead, each with their own abilities and play-styles.

Tickers rush in and explode, wretches can climb specially designated walls and so on. In total, there’s eight different types of Locust to play as, though you’ll have to earn the right to play as the stronger Locusts. Each objective you complete or COG that you kill earns you points. These points unlock the stronger classes but get reset at the end of each game. It’s easily the most tactical, team-focused and enjoyable mode from my experience.

Other than that, what’s there to say? Free-for-all, Team Deathmatch, Domination. We’ve all been here before. 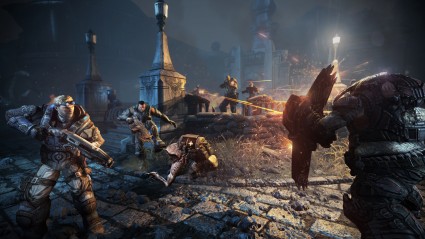 The biggest problem with multiplayer, as with the rest of the game, is that there’s just not enough here that’s new. Nothing highlights this problem more than the maps. There are four maps which are used for Overrun and Survival modes, and four other maps used for the rest of the modes.

This means that you’ll sit down with your favourite mode and you’ll see the same four maps over and over again. Yes, four. Four.

That’s just not enough. There’s extra maps that’ll be available to buy somewhere down the line, but this doesn’t sound like a good thing. It just sounds like withheld content waiting to be sold to me at a later date.

The final section: Conclusion
Don’t get me wrong here. I think Gears of War: Judgment is a good game that’s well made. I think the multiplayer modes that have been added are good. I think the ideas implemented in the campaign are great. 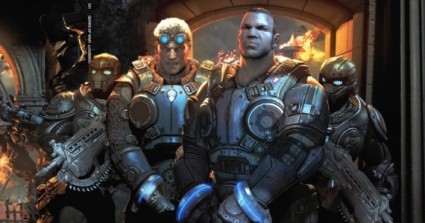 Throw away the key?

The biggest problem this game has is the fact that it’s a Gears of War game with nothing new to offer. It tries out one or two new ideas, but never fully commits itself to standing out from the crowd, being all too happy to fit in with the other games of the series.

When there are three other Gears of War games that are near identical to this and half the price, it becomes hard to truly recommend it.

People were worried that this would come off as nothing more than a ‘stop-gap’ entry, and I have to say that’s exactly what the whole experience felt like. It’s plain to see that this was never going to be Gears of War 4, and that’s put the title (and the developers) in a tricky situation right from its announcement. 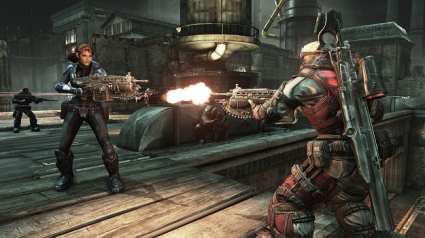 Humans shooting humans? Who’d want to play a game like that?

If you’re really jonesing for some Gears, then by all means buy this game. It hangs well with the rest of the Gears games, though maybe lacks the amount of content and giant set-pieces found in previous entries.