Get up and Dance

Dancing video-games have really moved with the times, if you’ll excuse the pun. As fun as Dance Dance Revolution could be, at its heart it was more of a ‘Simon Says’, played with your feet with crazy high-paced music playing in the background, than a true dance video-game. The motion gaming craze has provided a serious chance for the genre’s evolution, however, with Just Dance pioneering gameplay that actually resembles real dancing, for a change. Kinect took that one step further with Dance Central, tracking the movements of your entire body.

With success and fame comes imitation, and of the latest wannabes to step onto the floor and show off its moves is Get Up And Dance. Can it be a true performer, or is this one that should be booed right off the stage?

As a Wii and Playstation Move title, Get Up and Dance is obviously more in the same vein as Just Dance than it is Dance Central. Waggling controllers are the order of the day here, and if you’ve played any of its contemporaries, particularly the one that started it all, you’ll feel right at home. Pick one of the game’s thirty licensed pop music tracks, and then emulate the moves represented by the on-screen avatars and move-prompt cards. 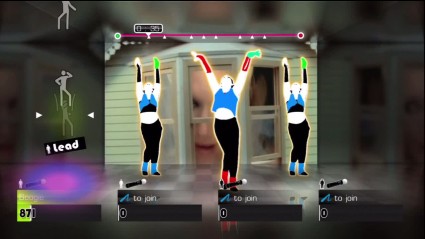 Put your hands in the air like you just don't care. It's likely you genuinely won't.

As is common with the genre, there is a complete lack of any real career progression, story or unlocks system. Evidently, although gameplay has advanced past its simple arcade roots, the structure and content of dancing games has not. This wouldn’t be too much of a problem if the title’s bread and butter itself wasn’t undeniably flawed: the dancing itself.

Get up and make a prat out of yourself
First of all, I make no claims to being an expert in choreography. Yet, even my inexperienced eyes can determine that a disappointing majority of dance routines in Get Up and Dance are utter rubbish. Rather than make you feel like a real dancer, the choreography is just as likely to give the impression of an excited toddler waving their arms around in time to the music.

A little too aware of its target demographic, the choreography is also discriminatingly biased towards female players. It’s granted that participation in these type of games is liable to make you look like a tit, but after a few too many chest thrusts, hip gyrations and thigh caresses I was eager to throw in the towel. Overall it’s not entirely banal, but compared to Dance Central the routines are laughable on the whole. 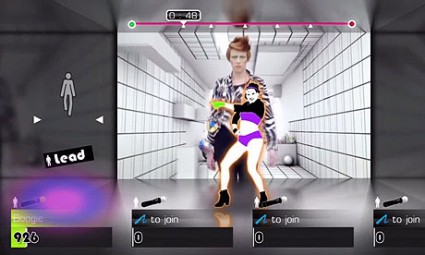 Even worse is the detection of said mediocre dance moves, which ranges from undeservedly generous to downright cruel. I had to laugh as the game regularly awarded me ‘flawless’ ratings for flailing around in panic, and felt like throwing a strop whenever I managed to nail every move but was admonished regardless. Sadly, best results are often achieved when you forget about dancing properly and just focus on moving the controller in the right direction; a real letdown for a ‘dancing’ game.

As well as the main ‘Get Up And Dance’ mode, the game also ticks the usual boxes with a ‘Rehearse’ mode for practising your hoochie grooves, and a ‘Shape Up’ fitness mode for wiggling off the wobble. These aren’t overly compelling and will be of more interest to some than others, but manage to fit their purpose nevertheless.

A real show-stopper?
Not content with imitating Just Dance’s gameplay, Get Up and Dance has also seen fit to plagiarise its graphical style; the half-silhouetted figures that jive on your screen are alarmingly familiar to its forebear. Not only this, but these abstract caricatures aren’t particularly easy to follow in the heat of strutting your stuff. As the 2D avatars spin around and their limbs ambiguously merge into their body, the only move you’ll be likely to pull off is scratching your head in confusion. 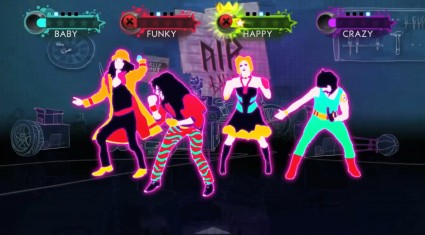 A shiny penny to the keen eye that spots something wrong with this picture... it's not actually from this game, as if you can tell the difference

Put another dime in the jukebox, baby
As a music game, Get Up and Dance at least manages to get something important right: its low-budget and obscure nature thankfully doesn’t reflect in its soundtrack, which has a decent mixture of pop music hits from the last several decades. Girls Aloud, Nicole Scherzinger, Lionel Richie and Gwen Stefani are amongst the chart-toppers making an appearance in the game.

If I have one criticism, it’s that even though there is a great selection of artists on offer, they arguably haven’t always chosen the most suitable singles from their discography. Jessie J is included, for instance, and a no-brainer in my eyes would have been ‘Do It Like a Dude’, with its raunchy beat and attitude. Instead, however, ‘Nobody’s Perfect’ is the song of choice here. Despite being a great single in its own right, it just isn’t a great fit for Get Up and Dance, coming off as a little tepid thanks to its slower tempo (and also not helped by the trite choreography).

Thirty tracks is also bordering on the sparse side compared to the competition. Nonetheless, despite a few missteps, the notable soundtrack is the most (and perhaps only) pleasant surprise that this game has to offer.

Idiocy in numbers
There are some things in this world that are rubbish on your own, but magically become slightly more entertaining once intoxication and other (intoxicated) people are added into the mix. Get Up and Dance is one such creation: these genres are commonly referred to as ‘party games’ for a reason. 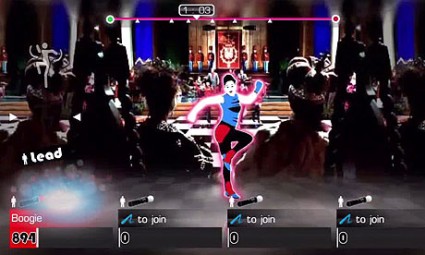 Look, this is how all the pros dance! Apparently.

Several multiplayer modes vie for your drunken attention. Tug of War pits two teams against each other to reach the highest score, Last Man Standing is a game of luck based on how accurately the tracking system actually decides to recognise your movements (okay, maybe I’m just being facetious), and Party Mix does what it says on the unimaginative tin. To the delight of prepubescent girls everywhere, a Group mode puts you in your own little troupe of lead and backing dancers, working together on one score.

Nothing here screams revolutionary, and the same issues present in single-player rear their ugly head here also. Who cares if the game is more tolerable once sobriety is thrown to the wind? A lot of rubbish things suddenly become more exciting when alcohol is involved, like dance music, eating kebabs of questionable meat content, and going to the toilet.

What’s particularly alarming about the prospect of multiplayer in Get Up and Dance is the practicality of it. A huge amount of space would of course be required for (comfortable and injury-free) four-player, that’s a given; but most worrying is the price of admission for the full experience. I tested the PS3 version of the game, in which one-handed play is an option, but for everyone to play with two Playstation Move controllers would require eight controllers at around £30 each… a staggering total of £240. If you have four-player in mind then you’d better hope that your mates all have controllers of their own they can bring round.

Just Pants?
Sadly, Get Up and Dance does little more than monopolise on the current success of motion-control dance games, bringing nothing new or exciting to the floor. It’s a budget title with price and quality to match; diehard dance maniacs could get some cheap thrills from the admittedly decent soundtrack, as long as they already own the necessary number of controllers. Otherwise, there’s not a whole lot here to recommend.