Sometimes a new IP comes out of nowhere and blows everyone away, but then its sequel takes a step in the wrong direction and forgets what made the original great in the first place. Just take a look at Dragon Age, for instance.

The GRID series knows this all too well. After releasing one of the most highly regarded racing games of its time – pioneering superb driving mechanics, believable A.I. and the time-rewind Flashback feature – they followed it up with the merely ‘decent’ GRID 2, which took a more simplified arcadey route and alienated much of the fanbase.

Codemasters are determined to redeem their previous transgressions with GRID: Autosport, however. Boasting a back-to-basics, ‘true’ sequel to the original Race Driver: GRID, can Autosport recapture the magic or will it be another middle-of-the-pack result?

Starting up GRID: Autosport for the first time, you can tell Codemasters mean business. It’s soon apparent that Autosport eschews all extra fluff – narrative, lengthy pre-rendered cut-scenes, celebrity endorsements and bonus game modes – for an obsessively reductionist, racing-focused experience. Even the menus are minimalist, with black screens punctuated by simple white text and logos. This is a wholly gimmick-free racing game.

There’s still plenty of variety though, and this is achieved through the five key racing disciplines, each with different handling styles and challenges. Touring is a solid all-round racing mode with plenty of paint-trading; Endurance demands patience and strategy in order to preserve tyre condition over long stretches; Open-Wheel features F1-style vehicles fraught with high speeds and fragility; and Tuner and Street are for the cool kids, consisting of drifting challenges and claustrophobic street races respectively. No doubt you’ll form your favourites, but it’s arguable that all are entertaining and well-realised in their own ways. 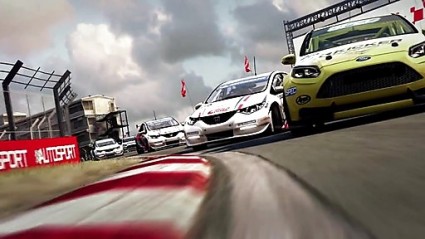 With around 80 cars and 100 different racing routes spanning the five disciplines, there’s no shortage of racing content. What’s better is that experiencing it all is a joy thanks to stunningly executed handling and A.I. I’m no racing aficionado, but Autosport seems to perfectly straddle the line between simulation and arcade, with handling that is equal parts challenging and satisfying, whilst not being being dauntingly complex or realistic. Nonetheless, ensuring your car adheres to the ideal racing line is a constant wrestling match, one that kept sweat on my brow and a grin on my face.

I had an equally strong love/hate relationship with the opposition, the likes of which feel believably human. These A.I. racers are determined, and they are aggressive. They’ll shunt each other – and you – out of the way on a regular basis, and they’re not infallible; they make mistakes too. Watching an F1-style supercar that’s front of the pack spin out and smash into a rival, violently shedding parts of its chassis as it causes a multi-car pile-up, is a gloriously chaotic spectacle. Speaking of which, Autosport does feature extensive damage modelling, which creates some wonderful visual feedback from the little skirmishes you’ve had around the track.

Due to the resolute, slightly neurotic A.I. opponents, races can be genuinely tough. As I said earlier I’m far from a racing expert, but on the default difficulty I breezed into first place throughout much of Forza’s campaign. I had no such luck with Autosport. Here it feels like an achievement to place anywhere above the pack’s middle, and it could be argued that it’s all the better for it. Fighting tooth-and-nail for higher positions amongst bloodthirsty enemies is far more entertaining than spending your time leisurely cruising around on your own in front. Thankfully if you did find things a little too difficult, there’s a comprehensive assortment of assists and other modifications to switch on to give yourself an easier time, or switch off for an exp bonus. 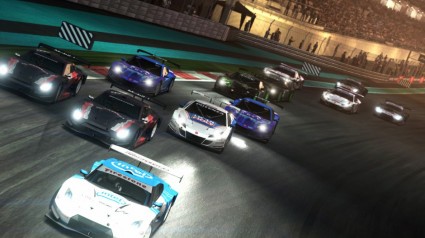 Well, would you look at that? This image is wonky too!

This exp system forms a large part of your progression through the Career mode. On taking part in an event, you can choose from a list of sponsors which will give you various challenges to meet in order to earn exp. Each discipline has its own level system, and increasing your level gives you unlocks, whilst reaching a minimum of level three in the main five disciplines opens up the advanced GRID Series. Unfortunately, Autosport does lack some features found within its contemporaries, the most notable being the ability to buy and modify your own cars. Instead, your sponsor chooses your car for you and customisation options are limited.

One feature does return which caused an uproar on its removal from GRID 2, however: cockpit cam. This time round there’s a smorgasboard of camera views, including not one, but two in-car cockpit views. Sadly, the dashboards themselves are a generic, barely-rendered blur. Give with one hand, take with the other…

Smudged in-car details notwithstanding, Autosport does look attractive. The lighting engine is much more realistic compared to the eye-catching but far overblown bloom of earlier Codies titles like DIRT and the first GRID. With all of the settings cranked to maximum on the PC version, the visuals are elegant and refined whilst remaining understated. There is one thing you must know, however: a four-gigabyte texture pack is available as an optional download. Download this texture pack immediately; do not question it. Without it, the car models look awful up close. This should have been a mandatory inclusion, as some may never know of its existence.

One aspect of the presentation which doesn’t hold up well is the voiceovers. They’re passable enough, but in far too short supply. As a result, you’ll be hearing the same stock phrases every time you finish a race, or press the D-pad communication system to find out vehicle damage and race strategy. On the other hand the soundtrack is inoffensive enough and cars sound adequately throaty enough to me, but I wouldn’t know the sound of a real supercar’s engine if one ran me over. 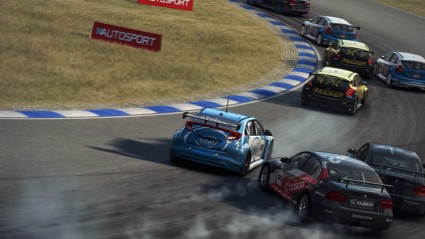 Okay, seriously guys, we get the idea.

Multiplayer is a natural fit for racing games, and so thankfully both local split-screen and online matches are available here. Split-screen is a simple two-player affair, whilst online multiplayer is fleshed out with the levelling system found in Career, and strangely enough, the one feature missing from it is the ability to earn money with which to buy and modify your own cars. It seems a little backwards, but I can only infer that Codemasters intended this to be the area which you’ll spend most of your time in.

Regardless of motive this adds substantial depth, with your finishing position determining reward, balanced against a repair bill to stump up for at the end of each race for any scuffs. Once you’ve saved up enough you’re then free to choose from a large roster of new and secondhand cars on the market. Matchmaking can be a bit hit-and-miss at times, but the online mode is otherwise solid with plenty of racing options and hooks to keep you interested.

Taking the GRID series back to its roots has paid off for Codemasters. GRID: Autosport is not the most realistic racing game ever, nor is it conversely the most accessible. It certainly isn’t the most fully-featured. Yet it does one thing well, and that is the racing itself. With finely tuned handling and strong A.I., races are consistently both exciting and challenging, and that’s what it’s all about, surely?