Heroes of the Storm

My experience with MOBAs is short-lived – it wasn’t until the release of SMITE last year that I finally learned to play and enjoy the infamously daunting genre. From there I dipped my toes into League of Legends, and I had fun for a time. But then I hit a couple of roadblocks. For starters, I never did fully get my head around the item shop. In the heat of battle, I had far too little experience to find and choose the perfect upgrades for my build. This was mitigated by researching build guides online, which always felt like a cop-out but at least let me be somewhat competitive.

What was more of an issue, as daft as it sounds, was actually devoting enough time to a full game. All-in, a match can take anywhere between half an hour to a full hour. Play an FPS online and you can happily drop in and out as you please without repercussions. Leave a MOBA game early, however, and you seriously handicap your team whilst incurring a penalty on your account. I tried my best to allow a full hour before committing to a match, but real life always managed to get in the way. The final straw was when I was forced to leave or go AFK several times within a short period, for reasons beyond my control, and I was hit with a seven day account suspension. It just wasn’t practical.

Imagine my interest, then, when I read about the features of Heroes of the Storm. Shorter matches spanning between 20 and 25 minutes. Completely reworked character system, swapping out the item shop for abilities and stat upgrades selectable as you level up. Otherwise very familiar MOBA mechanics, mixed up with a different objective for each map. It’s as if Blizzard had painstakingly designed a MOBA (or ‘Hero Brawler’ as they’re stubbornly calling it) just for me.

Okay, perhaps they didn’t just make it with me in mind. One thing that is clear, however, is that this is a game for Blizzard fans. Whereas League of Legends has an original roster drawing from a variety of fantasy inspiration and SMITE bases its characters on mythology, Heroes of the Storm is a party of Blizzard properties. From Starcraft II’s Raynor and Diablo’s Kerrigan to World of Warcraft’s Chen, the cameo appearances are vast. As a casual player of these franchises at best the significance of many of them is somewhat lost on me, but it’s easy to appreciate that Heroes is to MOBAs what Smash Bros. is to fighters, for Nintendo fans. 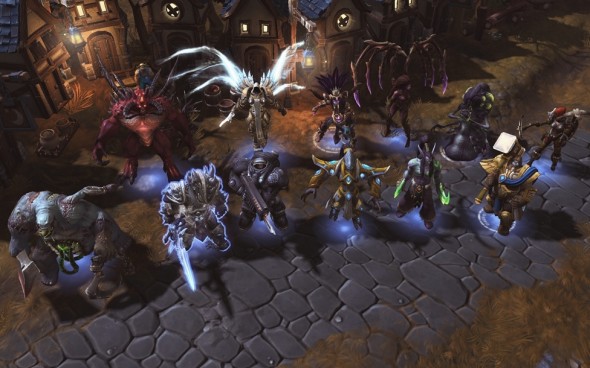 In standard MOBA form, five of these characters face another five in a fight to destroy the enemy’s base, or Nexus. There are multiple lanes to traverse, defense towers to siege, jungle monsters to take down and enemy creeps to farm for experience. So far, so MOBA. Yet there are several crucial, game-changing differences. Rather than having one main map à la The Summoner’s Rift supplemented with some secondary maps and modes, the primary gametypes all operate on a rotation of numerous distinct levels. Each has a unique task to carry out alongside the main objective, such as capturing and holding temples, fighting monsters for skulls or gathering golden coins from chests to pay to a pirate captain. Complete the requirements here and you’ll be gifted with a powerful weapon to help lay waste to the enemy base, such as lasers and cannons that fire at their towers, or a strong creature that is summoned to fight for you.

These are a genuinely engaging way to inject variety into a traditionally samey setup, and play a large role in hurrying the game along for that sub half-hour play-time. They also serve to only strengthen the already strong demand that a MOBA places on teamwork. League of Legends and DOTA 2 are very reliant on pitch-perfect co-operation, but whereas a more skilled player can bolster themselves up and ‘carry’ the rest of the team, in Heroes of the Storm the experience pool is shared. There’s no place for lone wolves here – you’ll have to coordinate your efforts on objectives and team battles else face defeat.

The death of the item shop also helps to keep the action flowing thick and fast. As your team levels up you’ll be able to choose skills on the field. The only reason you’ll need to teleport back to base is to heal, but regenerative fountains and healing spells from supports largely help avoid this too. Experienced MOBA players may disregard the item shop removal as ‘dumbing down’ character builds, but there’s such a range of talents, stat increases and skill augmentations available that you have everything you need to buff certain stats or adopt different tactics as necessary. 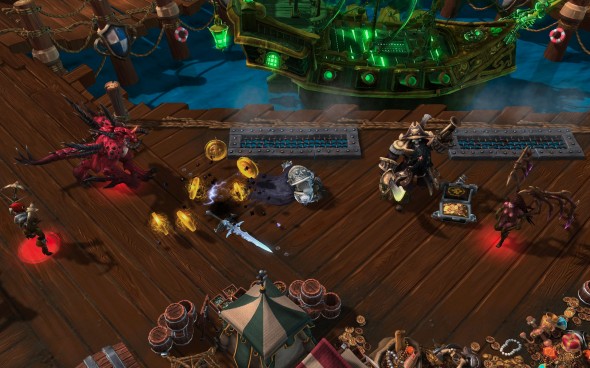 If we assigned review scores out of 10, the inclusion of a pirate level would probably give Heroes a bonus point.

Matchmaking is another area which has been wonderfully streamlined. The Quick Match option lets you choose whichever hero you prefer, automatically places you in a reasonably well-balanced team and often has you starting a match within around 20 seconds. If you’re the type that prefers to agonise over team composition and fight amongst yourselves only for a player to drop out at last minute, then the more traditional Team League and Hero League are happy to cater to you too. As a casual player, I personally love the ability to get straight into the action and skip all of the bullshit.

The approach taken for Heroes of the Storm is so typical of Blizzard. Rarely now do they invent a completely original concept, but rather they take something that already works and polish it to a blinding sheen whilst stripping out unnecessary complication, leaving a hyper-accessible finished product. Hearthstone is another recent example which epitomises this philosophy.

There is one noteworthy caveat to an otherwise superb experience, and that’s how surprisingly expensive it can get. Heroes adopts a typical MOBA free-to-play model, offering several free heroes a week on a rotation. To buy a hero outright, however, you’ll typically pay between £5 and £10 a pop, which could add up alarmingly quickly. There is currently one reasonably-priced bundle – the Starter Bundle, costing £4 and including three heroes, a gold/experience-boosting Stimpack and two mounts. This kind of pricing is more than acceptable, and as such I happily bought it myself. Compare that to the particularly horrific Jaina Winter Veil Complete Pack, including the single titular hero, a couple of skins and a mount, currently ‘on offer’ for £23 but typically £30. 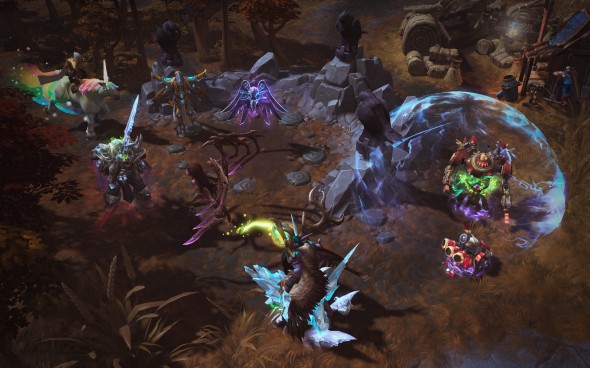 Check out the rainbow unicorn mount. Yep, that’s a thing.

Of course, there are numerous ways to earn heroes for less, or free. Each can be bought with in-game gold, which increases very slowly through normal play but can be boosted by completing daily quests and levelling up a hero to level 5, for sizeable bonuses. Earning an expensive hero through this route will still take a substantial amount of time, but there are a handful of ‘budget’ heroes which can be acquired cheaply to help bulk out your roster. Through my playtesting I’ve had the luxury of a couple of 7-day Stimpacks increasing experience and gold by +100% and +150% respectively, stacked with +50% and +100% experience events. As such my progression has been quick, but I can only imagine that it’s otherwise a bit of a grind.

The MOBA has quickly become an over-saturated genre, full of prospectors trying to earn a slice of the pie occupied by some of the most popular video games in the world. Many have come and gone with little consequence, but I thoroughly believe that Heroes of the Storm has some real staying power. The tweaks it has made to the traditional formula – shortening match length, streamlining character levelling and emphasising objective-based gameplay – have distilled the essence of what makes a MOBA great and removed much of the frustrations, whilst adding its own unique flavour.

Its hero pricing is a turn-off; paradoxically I feel that I would be inclined to spend more money overall if items were cheaper. Nonetheless, with enough patience you can still enjoy the game whilst slowing unlocking its content for free or at a minimal cost. If you’re an enthusiast of the genre, or even if you’ve previously been unable to get into it, I would strongly encourage you to download Heroes of the Storm and try it out.