It’s safe to say that I’ve had my fill of Paris. I’ve spent time pretending I’m a model, making poisonous cocktails and offing fashion designers that weren’t my target but were too annoying to ignore. In fact, so much time went by that I was starting to worry that Hitman wouldn’t be able to meet its deadlines after promising us we’d have a new level every month.

Luckily, slightly more than a month later, we arrive at Sapienza. A quaint and seemingly quiet Italian beach-side town. You’re greeted with a fantastic view of the piaza, a splendid church and a briefing that tells you there’s a deadly pair of scientists to murder and a deadly toxin to destroy. Sorry Agent 47, this is no holiday. The only break here is the one in your target’s neck.Which is a shame, really, as IO-interactive have done such a great job of filling Sapienza full of detail and life that, if it were real, it’d be my choice for a long weekend sojourn. Right from the start, the level is brimming with activity. Not in an overt way, as there’s no fashion shows occurring, but a gentle stroll through town will make it clear that the scientists live in a big mansion, the church is a point of interest and a new cook is late for his first day. Keep an eye out for a sleepy private investigator too. 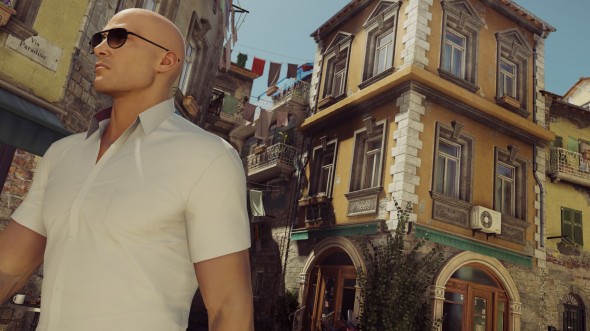 All of this, of course, isn’t just there to distract but instead to lead you into discovering approaches to your targets. This level, more so than the previous Paris offering, does an amazing job of signposting, highlighting and pointing you to these different opportunities but in such a way that it doesn’t feel like you’re simply following a map. You’ll overhear conversations, have Dianne make leading comments and notice scripted events take place in front of you. Yet, despite all of this, it still feels like you’ve made a real discovery when you figure out that using the [REDACTED] in the [CENSORED] leads to your target [EDITED].

As you can see, I don’t want to go into detail with what’s on offer in the level as that’s where the fun’s to be had. What I will say is that there’s loads to see, do and play with. There’s a good range of silly accidents and stealthy takedowns. Some of the opportunities you’ll discover are multi-faceted and require you to fulfil a number of conditions whilst others are as simple as flipping a switch. 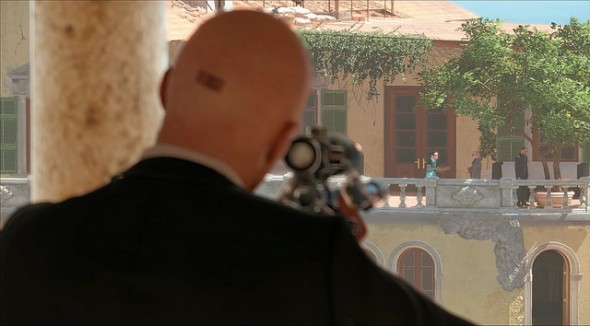 Sometimes people complicate things. All you need is a sniper rifle and a steady aim.

There’s plenty to do and there’s plenty to see. To unlock everything, all of the challenges, feats and assassinations, you’ll need to replay Sapienza a number of times. Luckily the items you unlock, the starting positions and the challenges you’ll be tackling are so varied it won’t feel like a grind.

Except for the one part that is a bit of a grind.

One thing that’s new in Sapienza is that you’re tasked with not just taking out two people, but you also need to destroy a virus which is being developed in an under-ground lab. The problem is that this feels like a secondary objective because there’s nowhere near as much variety to how you can break a vial compared to the ways you can toy with a human. In the vial’s defence, it is an inanimate object, to it’d be odd if it started wandering around the level. 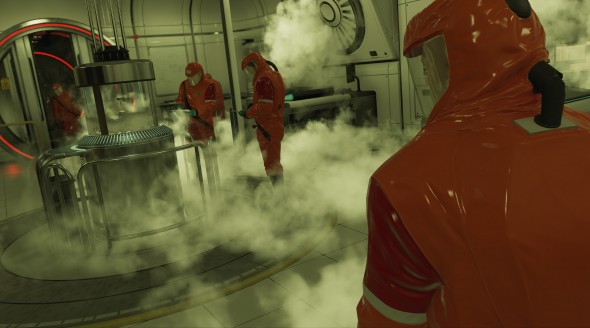 The vile doesn’t put up much of a fight, sadly.

This led to a number of playthroughs where I was having a great time. Scientist one was played with and scientist two was messed around with royally. To complete the mission I then had to break a glass tube in the same way that I’d done five times in a row before. As there are so few challenges that involve the destruction of the virus, once I’d figured out the quickest and easiest way of defeating the deadly bundle of germs, that’s all I did. It felt like more of a chore and always felt like a piece of busy work I had to do after having my fun with the real targets.

It’s a fairly minor gripe in what is, overall, a brilliant sandbox. Easily one of the series’ best. Full of variety, opportunities to uncover and methods of approach to discover; it’s another quality level.