Have you ever thought that there weren’t enough games with  zombies in them? Like the re-animated corpses they star in, games with grave-vacating enemies just keep on coming and the trend refuses to die. Adding to the pile of undead-related games is How to Survive.

Will this downloadable title be nothing more than digital deadweight, or is it a binary blockbuster? Let’s have a look.How to tell a tale

As already stated, How to Survive is a game all about zombies and, as the title suggests, how to survive whilst in their company. One area of the game that deserves praise is its story. Well, not it’s story, but at least the attempt at creating an excuse for all of the island-hopping and zombie killing to take place.

Essentially, you wake-up on an island shore and you find a page from a book. This island is no typical Caribbean holiday destination; it is in fact full of zombies. Luckily the book isn’t Twilight; it is instead Kovak’s Survival Guide. 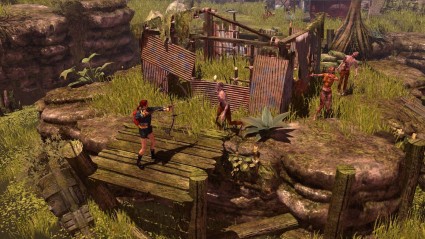 What’s in that shed? Other than zombies, I mean.

Kovak is the resident survival expert, amateur author and a character you bump into from time to time. By collecting the pages of his book you’re treated to animated tutorials that explain how to kill things, light campfires and generally not get eaten.

These animated instructions are done with a real humour that helps stop the game from becoming too serious about itself. This is necessary, as some of the missions that you undertake aren’t all that bright and breezy. To claim this game can be ‘spoiled’ is a bit ridiculous, but there is one particular mission that remains with me that has a particularly dark ending. I won’t go into detail for fear of ‘spoilers’, but this juxtaposition between comedy characters followed by completing missions with grim endings is slightly jarring but somehow works for me. It’s almost as if your character’s having a fun romp around these islands whilst everyone else is losing loved ones or suffering horrific injuries.

How to play
How to Survive plays like any other top-down action game. You control your character’s movement with the left analogue stick and aim your character’s axe swings or gun shots with the right stick. Even though it shares its control scheme with twin-stick shooters, How to Survive doesn’t flood the screen with enemies to keep you interested. Nope, How to Survive is all about scavenging for materials, food and water. If you’re really lucky, you’ll also find somewhere to sleep.

The survival mechanic works fairly well, with hunger and thirst being something to avoid as it will affect your ability to engage in combat and there’s also a day/night cycle that comes into play with characters becoming tired and nasty monsters coming out at night. This turns the game into a time-management, resource-gathering, zombie-murdering hybrid of a game. Except, with all of these mechanics in play, none of them stand out. 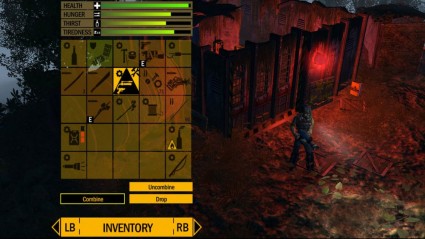 This menu allows you to combine items. You’ll see it a lot.

The combat is fairly basic and boils down to timing swings of mêlée items, and the firing of guns has a fairly generous lock-on system that kind of removes challenge or the need for skill. A number of zombie types are involved, though they’re tried-and-tested clichés at this point. Fast zombies, zombies that explode and zombies that are wearing armour all make an appearance, but not for the first time. Anyone who’s played Dead Rising or Left 4 Dead won’t be impressed by the range of enemies on offer.

Scavenging for resources helps ensure that you explore the maps to their fullest and is absolutely crucial to making it through to the end of the game. Whilst the number of resources is hardly at Minecraft levels of possibilities, there’s a good number of weapons, meals, potions and armour to craft from the items you find.

It’s absolutely crucial that you do so too. Without some of the better weapons or armour, your character simply won’t make it off the island alive. It’s also crucial to do for your own sake, to keep the combat interesting. Going from a bow and arrow to a chainsaw really helped to keep me invested in the combat and piqued my interest in seeing what came next. So whilst the combat never really evolves, the items you use helps to keep it from going too stale.

Another thing that changes over time is your character’s level. Let’s be honest, what game nowadays doesn’t have a levelling-up mechanic? In How to Survive’s case, it’s fairly poorly implemented. Characters take ages to level up and the increase in stats never really changes how you approach the game. Perks that are unlocked also don’t offer enough of a boost to your character to really move you out of the play-style you quickly develop. To slightly combat this, there is something to be said for the fact that the game does offer some difference of approach depending on what character you play as.

There are three characters to choose from and their base stats all show they play slightly differently. One character, for example, has low stamina and so can’t really run away from zombies. Instead, they have a strong strength value which causes them to knock zombie’s heads off. It boils down to the fact that some characters are slow, tank types and others are quick and nimble weaklings that can’t take a bite or two to the neck. 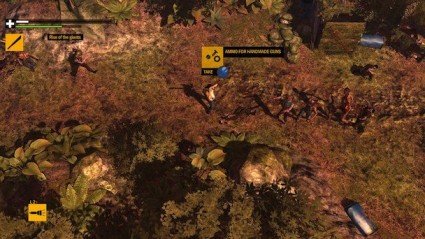 Picking up food off the ground? It’s fine. 5-second rule and all that.

What doesn’t change over time is the mission structure. The game contains two main modes. One is a story mode, where missions are dished out via survivors you bump into, and the other’s a challenge mode. This is much more straightforward, as at the challenge selection screen you’re informed of what you need to do.

And what you need to do is find things. Go get some petrol. Go get some healing herbs. Go and find a battery. Sometimes you’ll need to go to a place once you’ve found a thing. Take that petrol to the plane. Take the herb to the person. Take the battery to the boat.

The missions do nothing more than give you reason to move from island to island and in some annoying cases, backtrack through areas you’ve already travelled through.

Fortunately the locations are fairly interesting to navigate through. Plenty of nooks and crannies exist in which herbs and other goodies could be hiding. There’s not a great variety to the locations – they are, after all, tropical islands – but there’s some fun to be had with bridges, ramps, huts and other assorted structures that hide both resources and zombies.

How to look good
The rest of the game is presented well enough. The visuals do the job, but to commend them further would be difficult. It gets a pass from me as it’s a downloadable title, though this is becoming harder to forgive when there’s plenty of downloadable titles that do manage to provide art styles which go beyond satisfactory.

How to listen
Equally the audio work is also fine. Zombies moan and groan, the ocean waves crash convincingly and the rest of the island has a consistent level of ambient noise to it that helps draw you in.

In fact, one of the best decisions that the team behind How to Survive made was to not have a soundtrack. The lack of music helps draw you into believing it’s just you on this tiny island and you’ve only got flesh-hungry monsters for company. 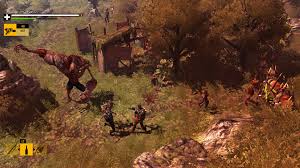 Finally, some of the voice-over work is worth a mention as well. Kovak delivers his line in an upbeat Eastern-European accent that helps add to the comical effect that the excerpts from his survival guide is meant to have.

How to lose friends
The game does offer some multiplayer options, but they feel slightly tacked-on and simply offer a new way to play the existing single-player content. With two players on the screen the camera can struggle to keep up with both players, often resulting in one player hitting the border of the screen.

Also adding to the chaos is the fact the players can hurt each other with wayward swings and off-target gunshot, but it’s the perceived stealing of resources that will destroy these fragile alliances. Although the game seems to increase the number of items being dropped or spawned, it’s still a huge annoyance when someone picks up the ammo you had your eye on. The level of rage felt reaches ‘hit by a blue shell on the last corner’ heights.

How to conclude
To be fair to How to Survive, it sets out to create a dangerous island that you have to explore and encourages you to experiment with the resources you find. In that regard, it’s a success. The island is dangerous and you’ll need and want to go hunting for scraps of metal and plants.

The issue arises when you stop and think about why you’re doing what you’re doing. The missions aren’t varied enough and don’t really hold your attention, and to top that off, combat is a little dull thanks to the lack of skill required.

I’d say you give How to Survive a try if you’re into zombies and like the idea of being stranded on a tropical island and having to fend for yourself. For those of you that aren’t immediately interested in this idea, however, you could probably skip this altogether.