When Superman was created in 1938, he had the ability to leap tall buildings but he couldn’t actually fly. As superheroes become ever more popular, I find myself preferring the ones that have interesting powers and limitations over the god-like heroes such as the Man of Steel. Infamous: Second Son allows you to jump high but never fly, and I found its limitations on superpowers to be what made it more exciting. Ultimately, Second Son is all about the powers; the strange, unconventional, beautiful yet limited super powers.

As the PS4’s first big budget title since launch, Second Son has a lot resting on its shoulders. Many will see it as the first example of what the new generation of consoles is capable of and others will seek for it to justify their purchase of new hardware. For me, it is a great way to kick off the next generation.

Second Son is an open-world adventure in which you play as Delsin Rowe, a conduit who stands out from the other select few in that he can take other conduit’s abilities and possess more than one power. Delsin discovers this ability during the introduction and we are quickly presented with a binary morality system that puts you in a very difficult situation: Do you sacrifice yourself to save your dear American Indian elder or do you sacrifice the tribe to save yourself?

I wanted to play as evil on my first playthrough but I couldn’t bring myself to sacrifice Betty, whom I met only a few minutes earlier. Character relationships were established during the first 15 minutes that guided my journey from beginning to end, but never again did I feel a strong connection between the characters, nor was I given a strong reason to care.

Not even Delsin’s brother Reggie, his partner throughout, had much emotional impact and it’s unfortunate that Second Son teases strong emotional content but never delivers. I’m happy to say that the antagonist however, a conduit named Augustine, is despicable enough that I was very much looking forward to taking her down to save my tribe. It’s not much of a story, true, but let’s talk about the powers! 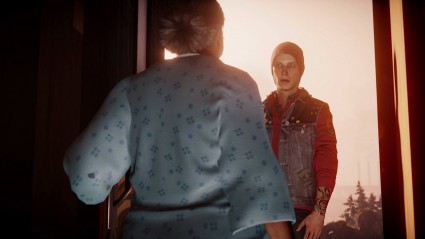 Throughout you can acquire four types of super power and while each is completely different, you’re only able to use one at a time. Because of this, and due to the constant need to recharge, I never felt truly invincible, regardless of how much I upgraded the various abilities.

With every new ability comes a new way to take down enemies, not to mention a new way to move around. Whether it be for combat or travel, you’ll be switching between powers often. For example, I might use neon to reach a new area and then switch to smoke before entering a firefight. With very few exceptions, you can use whatever power you want, when you want, once you’ve unlocked it of course. This sense of freedom is one of my favourite design elements.

In combat, smoke powers are devastating and fast, while neon is all about timing and precision. When confronted with a large group of powerful enemies I preferred to use smoke since you can blast a lot of soldiers with ease. Unfortunately, that power doesn’t last very long and you will find yourself needing to go find somewhere to recharge. You see, fights in Second Son feel like taking a deep breath, going for a dive, and then up for air to try again.

Once your most powerful attacks are used up and you only have medium and weak attacks, you expectedly begin to take a lot of damage and need to go somewhere to heal and recharge your power. To recharge smoke you need to find a smoke stack, burning car, or other source of smoke to replenish your “ammo” and heal more quickly. This dance is never-ending and the better I learned to manage resources and master movement, the more I enjoyed my time in this virtual Seattle.

I found myself truly enjoying this back-and-forth, because a total of four potential powers and a city that is open to explore in the middle of a firefight makes for very interesting scenarios. I could attack a guard post and escape to the top of the nearest building to recharge. Then I could seek out a blast shard to further upgrade my powers and immediately return to the same battle with a different or upgraded ability. This constant need to recharge made the game exciting even when I had fully upgraded every power. 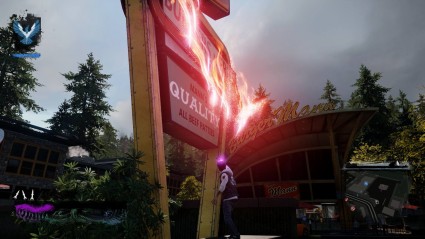 I’ll have an order of neon with that.

I found travelling with different powers to be the most fun activity in the game. Imagine jumping into a vent at the bottom of a building and coming out of a vent on the roof or running up the side of a building in a blur. Combine that with hovering and dashing and you’ll be able to go anywhere in Seattle, albeit in short bursts. Again, it all feels more like jumping than flying, more like sprints than a marathon. The city is large enough that the option to unlock fast travel points is appreciated.

Overall, I enjoy the powers a lot. Some more than others but I have never had so much fun with super powers in a video-game. As with the Superman example, I think the limits and constant need to recharge make the experience more interesting and they definitely make Second Son more hectic and fun. If the powers were more… powerful… I think the game would become boring very quickly.

The powers are fun and pretty to look at. In fact, the entire game is gorgeous and definitely way ahead of anything seen on PS3. While only a few environments are destructible and the city doesn’t feel very alive, Second Son impresses with no load times, incredible visuals, and tons of action on-screen at one time.

I couldn’t believe that I could destroy a far-away tower I could barely see while engaging enemies on a rooftop, another group firing from the ground, and helicopters attacking me from above. I’m sure the reason I find the powers so much fun is that it all just works. The PS4 is more than capable of handling every option available while feeling fluid and looking amazing. Remote Play on Vita also works great, although the controls make it too difficult to use powers as effectively. Fun fact: Vita integration requires you to turn and shake the Vita during some activities. 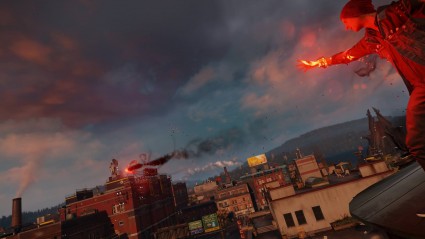 There is actually a lot to do in the sandbox city of Seattle. It is split into two large sections, with some smaller areas too. Each area has multiple objectives and collectibles, including walls to spray paint, hidden cameras to destroy, undercover agents to sniff out, hidden data recordings to track, communication arrays and towers to destroy, and a few other events (some of them randomly generated, such as enemy convoys and protests).

Some of your actions lead to the option of clearing the city of the Department of Unified Protection (D.U.P.) officers. Be warned that you can clear the city if you want, but if you do it too early, you’ll have very few DUPs to test your new powers on. In my case, I had very little to do after getting that last power.

Second Son offers you plenty to do but never feels overwhelming. I prefer a short game and was able to complete one playthrough in about eight hours, but it took much longer to complete 100%. The city is still open to you after completing the story and DUPs will still do their rounds and carry out raids, even if you ran them out of town. There is also the possibility of extra content as was demonstrated with the day-one DLC titled Paper Trail, plus the currently pre-order-only Cole’s Legacy missions. Additionally, you can replay the game with different karma.

Certain upgrades are only available to specific karma alignments. A good Delsin can slow down time when using neon to easily pinpoint areas on enemies and subdue them, while an evil Delsin does not have this option since he most likely doesn’t want to subdue anyone anyway. If you are evil, you’ll want to make mostly evil choices so you will get more evil karma to unlock better upgrade options; opting for moral shades of grey limits your options in this sense. Karma actions are also built up to launch an ability called a karma bomb that serves to clear your surrounding area of enemies. Each bomb is very satisfying in that it causes a huge blockbuster movie-style explosion with equally grandiose cinematics. 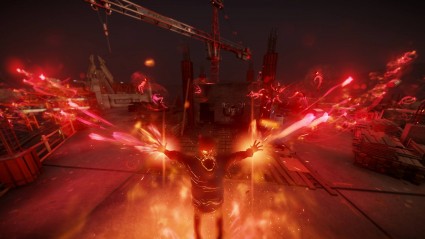 A Radiant Sweep aka an evil neon karma bomb.

Your good/evil choices have more effect on the gameplay than the story and the entire karma/morality system is very superficial as you actually have very few choices to make. At times you see two missions that seem to be available but one is locked due to your alignment. Why give the illusion of choice? Some cut-scenes will change but most will stay the same and you will always move from the same Point A to the same Point B. I enjoyed my evil playthrough more, only because it was easier to kill enemies than to subdue them and I preferred the variations of some powers. The morality system, however, really only serves to offer a hint of variety for a second playthrough.

For comparison, if you’ve played played any previous versions of Infamous, Second Son is by far the most fun. The story is better in previous instalments, true, but the gameplay improvements, like the ease of travel and fluidity of combat, more than make up for it. Traversing the city reminds me of 2004’s Spider-Man 2 and the power-set brings back memories of Microsoft’s Crackdown series, except I never felt overpowered or invincible.

The most fun I’ve ever had with superpowers

Infamous: Second Son is a great way to kick off the new generation and Sony is lucky to have this game to offer new PS4 owners moving forward. It’s at sometimes unbelievably beautiful, has enough content to keep you entertained for a good 20+ hours, and the way that combat and movement flow so well has to be seen to be believed.

The story is forgettable, yes, but I’ve never had so much fun with superpowers. I recommend that every PS4 owner experience it; it’s a great way to show off the console.