Limbo was a runaway success for Playdead in 2010, back when the term ‘indie game’ actually meant something. Thanks to the growth of digital distribution and early access programmes, of course, video games are now more often ‘indie’ than not.

INSIDE is Playdead’s sophomore effort, a long-awaited return to the industry they helped shape amongst the likes of Braid and Super Meat Boy. It’s a technical progression from its spiritual predecessor, Limbo, and oppressively atmospheric. Unfortunately, this doesn’t always result in something that is fun to play.

INSIDE‘s exposition will feel very familiar to players of Limbo: there isn’t any. Quite simply, you play a despondent-looking boy who has to keep walking right while every man and his dog (literally) want you dead. This can happen in countless ways, many of which are gratuitously brutal. Make no mistake, INSIDE is a horror game through and through. It’s a tale of terror and despair interwoven with abhorrent science-fiction. 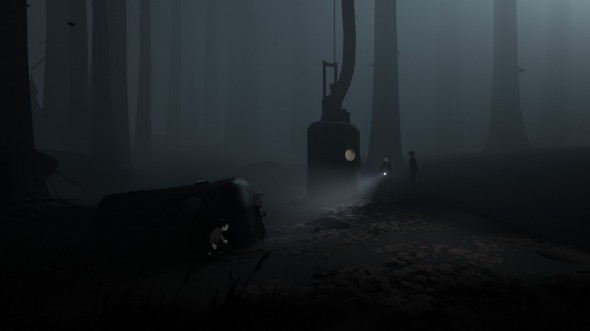 Don’t ask me why, but being alive is frowned upon. Let these guys catch a glimpse of you and they’ll quickly put a stop to it

Much of what you’d expect from the puzzle platformer genre is here. Numerous obstacles and dead-ends halt your quest to keep walking right. Overcoming these demands patience, good timing or just common sense. Sometimes they’re cleverly constructed. Other times, this is not so much the case and progression is straightforward. It’s a relief that, in what is already a stressful scenario, none of the puzzles are too frustrating.

Limbo was revered for its art style. Its two-dimensional, stubbornly monochromatic aesthetic complemented the misery of the protagonist’s plight. INSIDE builds on this formula. Whilst maintaining another desperately muted palette it begrudgingly adds some colour – the boy’s red t-shirt being a prime example. Likewise, despite interaction being limited to the 2D plane, the world is rendered with full 3D modelling. It’s a natural visual progression from Limbo’s origins and feels considerably more modern. 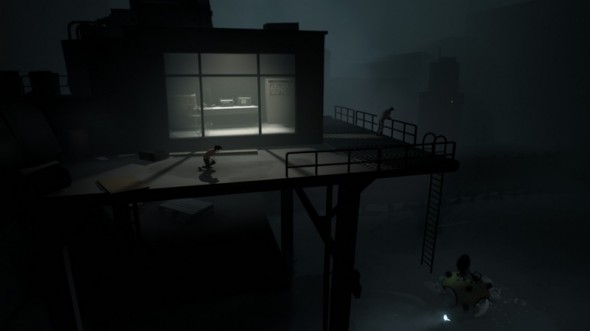 The real highlight is the animation. INSIDE is no technical monument, yet its dedication to locomotion borders on celebratory. Every character ambles with the appropriate level of intrepidity, sinisterness or ferocity. Many of the puzzles are physics-based and as such it’s a delight to see the world move and react so remarkably to your actions within it.

Sadly, the overall picture is not so flawless. INSIDE’s appearance is so somber, so abstract and grayscale, that it undermines its own beauty. For every darkly enticing environment bathed in radiant light there are a handful of stark grey corridors and barren voids. Each mechanically fascinating set-piece is diluted by sections of largely stagnant and motionless backdrops.

This undercurrent runs throughout INSIDE as a whole. It’s sometimes melancholic and dreary to the point of joylessness, with brief moments of wonder few and far between. 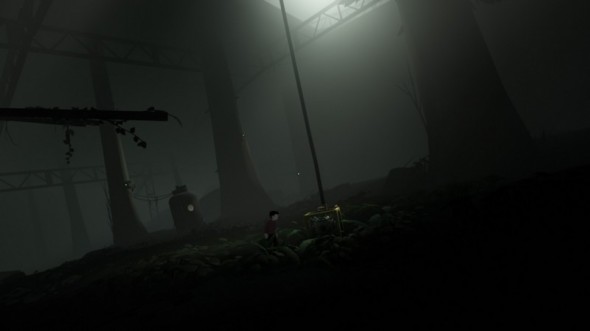 INSIDE‘s visual identity is strong but consistent to a fault

14 hidden orbs scattered throughout the world coax you to explore beyond an otherwise strictly linear route. Some of these orbs are quite difficult to find, however, and a time-consuming wander off the beaten path often results in nothing but disappointment. Only by finding all 14 and inputting an obscure sequence will you unlock a hidden ending. The only other reward in INSIDE is staying alive. Never does it take a moment to instil peace as a counterweight to hardship and it feels worse off for it.

Take Brothers: A Tale of Two Sons and Journey, both relentless expeditions to a final destination. Brothers, in particular, is no stranger to sorrow and grief. Yet who could forget the incredible vistas of Journey and the ever-advancing light mountain impelling you with hope throughout? The breathtaking encounters with nature in Brothers, their beauty a restitution from loss? INSIDE offers no such respite.

Occasionally you stumble across a puzzle using a completely original mechanic. The manner in which these curveballs are sparsely interjected throughout can momentarily inspire a sense of awe. Yet it doesn’t feel like enough. And sometimes these revelations are dragged out for too long, or re-appear time and time again to the point where the appeal of their creativity is lost. 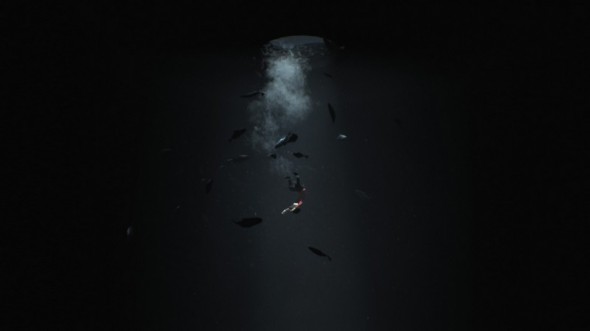 This is one of those cool, surprising bits. I’ll leave it at that

At around five hours in length, INSIDE at least knows to not outstay its welcome. The concluding passage, however, is mechanically brilliant yet utterly inappropriate in tone. I’ve heard some laud the ending but its bizarre juxtaposition with the rest of the game made it impossible for me to take seriously. Despite it being somewhat cathartic, it’s not much of a resolution – I was just left with an aftertaste of bewilderment.

INSIDE is an undeniably solid puzzle platforming adventure. Its controls and inner workings are watertight, dressed up with astonishing animation. The ambience is full of dark intrigue. Every so often, moments of genius shine through and elevate it into greatness, which makes it all the more disappointing that the rest of the ordeal fails to invoke as much passion.

INSIDE’s fatal flaw is that it takes itself too seriously. It tries so hard to maintain its gloomy, dread-laden atmosphere that it suffocates its charm and sense of fun in the process. A lack of playfulness leaves progression feeling like you’re going through the motions as you trudge onwards and solve puzzles. The recipe is there for a visual masterpiece, but a lack of real colour and contrast starves the world of life and vibrance.

As a concise undertaking, I’d at least recommend experiencing it for yourself. Whether you’ll wholeheartedly enjoy the experience is another matter.