Kingdoms of Amalur: Reckoning: The Legend of Dead Kel (DLC)

It’s always baffled me why the biggest games seem to get the biggest chunks of DLC. While MW3 gets flimsy maps instead of a booster to its blink-and-you-miss-it campaign, enormous games like Oblivion and Mass Effect get entire new areas to explore, complete with quest-lines and characters galore.

Colour me unsurprised then, when I heard that the first expansion to the unexpected (but much deserved) hit Kingdoms of Amalur: Reckoning was a whole new island full of side-quests, new characters and tons of loot; all for a credit-crunching 800MSP. Being such a fan of the vanilla game (read my gushing review here) I picked it up as soon as possible and it doesn’t disappoint one bit. In fact, it puts many other, less extensive chunks of DLC to shame.

The adventure starts when you receive word of a general call to arms issued by the Alfar army. The legendary pirate king Dead Kel and his band of Hanged Men have been terrorising ships ferrying troops and civvies across the northern Frostbreak Sea, and someone needs to pop over to his island hideaway of Gallows End to show him a thing or two. Of course, being the Fateless One and a consummate badass (you need to be at least level 10 to access the island), that someone is you.

After meeting an Alfar Captain in a dingy pub, you’re directed to the eccentric Captain Rast Brattigan. A quirky Ljosalfar warrior with a damaging reputation, she’s the only one deemed nuts enough to brave the trip from the city of Rathir to the shores of the island. Of course, a combination of Brattigan’s patchy abilities and the imminent arrival of Dead Kel brings the voyage to a sticky end, and you both wake up on the beaches of Gallows End minus a crew.

Venturing through a dank system of caves, you emerge on the Southern Coast in the shanty town of Cape Solace. The populace is made up exclusively of castaways; the ancient Dverga residents deserted the island long ago. The community worship a god they call Akara and are preparing to make a generational sacrifice to him as you arrive.

Without giving too much away, The Legend of Dead Kel weaves a compelling and refreshingly self-contained plot that is on par with the Faction Quests of the main game. Dead Kel himself is a believable and multi-faceted villain, and as usual all is not as it seems. Sacrifices, choices and difficult decisions will be made, and it’s a thoroughly enjoyable piece of story-driven entertainment. 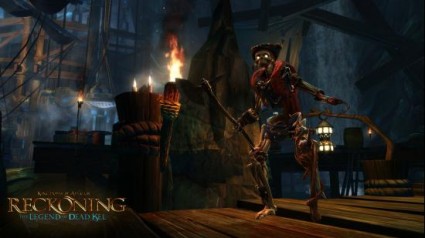 Pirate-style Faer Gorta are a regular sight on Gallows End.

Standout characters include the aforementioned Captain Brattigan and the titular pirate himself. Brattigan’s inane rambling and frank, occasionally filthy patter is a refreshing change from the stoic citizens of the Faelands. She’s instantly likeable despite the almost immediate feeling that she’s going to get you into trouble. Not to mention, she’s fantastically well-played by her voice actress. Dead Kel is equally compelling, his morose yet sinister tone and half-mask echoing the Phantom of the Opera and Blackbeard in equal measure. A man who’s making the best of a bad situation, his anguish and tattered honour make him more than the average ‘evil pirate’ character and a great foil to main-villain Gadflow’s religious fanaticism.

Gallows End is ram-packed with side-quests and tasks of course, with more than enough to keep you going for hours after you’ve dusted the main quest-line. Many of these diversions are situated around Gravehall Keep, one of the most inspired elements I’ve seen in a DLC pack for a long while.

After clearing the broken-down fort of despicable Scags, you claim it as your own and set about rebuilding it. By travelling the island and meeting other castaways you recruit a tidy little roster of staff and helpers, that open up a variety of interesting new quests and abilities. Alongside your own private shop you have a guy who salvages shipwrecks for loot, a guy who can train wild animals to give you stat boosts and a girl who runs your library and translates ancients texts to name but a few.

Once you complete the keep and the main quest-line you practically own the island, so you can recruit a diplomat to open relations peaceful and hostile with neighbouring nations for goods, trade or war. Although you never get to take an active part in any of this, it’s a nice little diversion. Also, just to show that Gravehall keeps on giving, sitting on your throne will prompt new quests from your staff, further extending the life of the DLC.

For the loot-hounds among you, there’s a plethora of unique and powerful equipment to find as you journey through the islands myriad locations. I personally found a tasty new greatsword, shield and set of greaves in my travels, but there’s enough variety to satisfy all Destinies and classes. If you are one of the many that were disappointed with the somewhat ridiculous look of the later materials (namely the sick-green Sylverite and the lollipop-red Prismere), you’ll certainly welcome the abundance of unique weapons and armour on offer.

The Legend of Dead Kel is not without its faults though. Due to its short running time in comparison with the mammoth main game, many of the characters feel shallow compared to the chief players in the main quest-line. With the exception of Brattigan and Dead Kel, the residents of Gallows End are pretty standard Amalur fare, which can occasionally cause the DLC to feel like a glorified side-quest rather than a full compliment to the vanilla game. 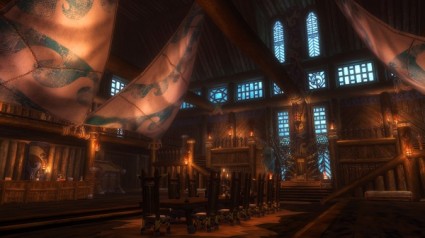 When it's finished, Gravehall is a beautiful stately home as well as a strong keep...

The island, while more than big enough to potter around in, is a little uninspired in places compared to the dank swamps of Klurikon or the stunning dustbowl of Detyre. To its credit though, Gallows End displays some great pirate-inspired areas and does the whole ‘shipwrecked isle’ thing very well.

The levelling could be a potential issue. Although the enemies level with you and even starting the DLC at level 33 I still found much of it challenging, a lot of the equipment you find is level-specific. I found most of it to be a little too weak for me to use, and the stuff that gave me an edge mostly did so because it combined with other bits of kit I already had. A notable exception was my greatsword, Scourgebane, which is the best I’ve found yet. My feeling is that low-level players will find a good stash of future kit, while mid-level players will benefit most.

Although it pains me to do so, I can’t wrap this up without mentioning the lack of a level cap increase. Traditionally with RPGs of this type the level cap is raised as a bonus, allowing players who’ve already finished the main game to level up a bit more. I suspect the reason Big Huge declined to follow suit is to do with the Ability trees and the Destinies system. That hasn’t stopped morons littering the interwebs with overreactions; insofar as to one guy actually claiming there’s no point buying the DLC because it doesn’t raise the cap.

The point of extra content is to give you another chunk of game to adventure through, not to feed your need to grind. Reckoning is obviously more about the story and the gameplay than hitting the top-level, and I implore you all to remember that. If you’re so bothered about leveling, go play WoW.

Allowing KOA: Reckoning to sweep the rug out from its peers once again, this first batch of DLC is a triumph in more ways than one. It presents an interesting new area with a compelling new storyline to get lost in. It also provides a decent amount of diverting side-content and rarely feels tacked on. Most importantly, it feels completely part of the world of Amalur; it’s as if Gallows End has been there all along. The island even slots into its own neat little area on the world map.

Big Huge obviously have had big plans for Amalur right from the off, and The Legend of Dead Kel is a great piece of evidence advocating the planning of DLC during the main game creation process. Despite the whiners bleating about the lack of level cap (and one guy even saying it should be free!) there’s more here than in most DLC packs. The Legend of Dead Kel proves that Kingdoms of Amalur is here to stay, and a force to be Reckoned with. See what I did there?