Life is Strange: Episode 2 continues the tale of Max, a gifted photography student who also happens to have the ability to alter time. In the first episode, premonitions of giant twisters, drug-dealing students waving guns about and the rekindling of an old friendship were the main focus.

Episode 2 concentrates mainly on the re-united friends of Max and Chloe, as they see if their relationship is as strong as it was or if too much has changed in the intervening years. Like the previous episode of Life is Strange, it’s mainly a sedate adventure game that doesn’t have you making life or death decisions all the time. This episode goes a little too far with the laid-back tempo, however, and turns into a lazy afternoon with an annoying acquaintance rather than an engaging series of events.

This is down to the fact that most of Episode 2 is about Max getting to know Chloe. Chloe’s a blue-haired rebel without a cause who happened to be Max’s best friend years ago. The two characters spend a lot of time together trying to rebuild their friendship, whilst Chloe is also keen to test out Max’s time-travelling powers. 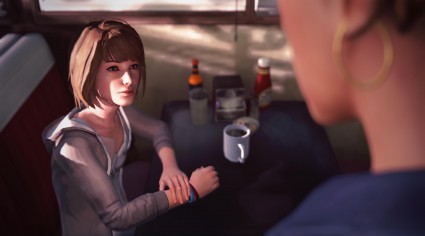 You’ll spend some time in the diner, though most of it will be sat down.

It’s a shame that this results in a series of ‘prove it’ moments. For example, Chloe empties her pockets and lays her belongings onto the table. You take note of what she’s got, rewind time and tell her about what’s in her jeans before she shows you. Fun? Not really, and it’s made even less fun when she then asks you to ‘prove it’ again by keeping track of an eventful minute of interactions within the diner. Watch what happens, rewind time and tell her how a customer will drop their coffee, a pair of students will fight and how the jukebox will go kaput all before it happens.

Life is Strange: Episode 1 was off to a good start in part thanks to its interesting premise, a collection of characters that were varied and settings that contained plenty of detail and were fun to poke around in. This is another area that I thought was a weakness of Episode 2 – the locales. Whilst the diner and the junkyard you’ll spend most of your time in look nice and contain plenty of visual detail, there’s not as much in the way of interactive items that add to the story. In the previous episode school hallways were littered with posters and graffiti and the dorm rooms let you get a sense of the residence’s character. The junkyard and diner that you spend a lot of time in simply don’t have this and merely act as stages on which to perform Chloe’s annoying tasks. 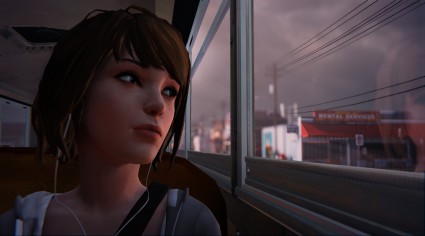 No bombs on this bus. Just mellow tunes.

This being said, if you’re keen on what Episode 1 showed you, Episode 2 is clearly still a must-play. The story doesn’t move forward too much but there’s a finale that drastically alters the fate of one particular character. I’m still keen on getting my hands on Episode 3 and finding out how the hugely divergent choices will end up playing out over the series as a whole; I only hope the following episodes don’t contain as much filler as this one.