It’s very rare that I can’t physically finish a game due to its content. As someone who writes about games, I feel like I need to play something all the way through in order to give a proper opinion on how a games eventually roll out, seeing as nearly all of them pick up later.

Unfortunately, Suda 51’s Lollipop Chainsaw is just so offensively uninteresting I can’t finish it. Which is a shame, as the story has the potential to be really funny but the rest of the game just won’t let me get there.

Just an ordinary day… with ZOMBIES!

You play as Juliet Starling, a stereotypical cheerleader living in small town America. On her 18th birthday, she heads to school to meet her boyfriend Nick but finds it overrun with zombies; and worse, her boyfriend has been bitten! Luckily, Juliet just happens to come from a family of Zombie hunters, and so jumps in with her rainbow coloured chainsaw a-twirling.

In case you hadn’t realised by the all the advertising and images surrounding the game, Lollipop Chainsaw’s story is so tongue-in-cheek that the tongue has seen a break for freedom and burst out the side in order to flee into the sunset, leaving the story struggling to be understood by anyone with a rational mindset.

This is a real shame, as it’s written by James Gunn of Slither and Super fame, and it bears all his trademarks: Americana with a twist. The setting feels like a collision between the clothes of the ‘50s, music from all eras and modern technology, with a bit of anime squeezed in. It’s a bit of a mess, but some of the jokes made a funny enough to forgive it. 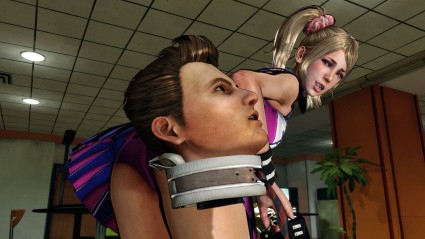 What I can’t put up with is some of the incidental dialogue from the zombies and the general feel of the game. Much like the recent problem people have had with Arkham City and Catwoman, the zombies in this are filthy when attacking Juliet, talking about doing horrifying things to her. It’s also constant, with almost every encounter featuring it. It doesn’t feel adult; it just feels crass. In fact, the entire game does, with constant T&A shots on top of the language.

Pom-pom, pom-pom, high attack, repeat
I really, really found the gameplay lacking. Lollipop Chainsaw plays like a character action game, with combinations of high chainsaw hits, low chainsaw hits, pom-pom attacks (cheerleader remember?) and dodges chained together to make combos. You also unlock other tactics throughout the game, such as gun attack and a high-speed dash attack that allow you to fight some of the different enemies more effectively.

My main problem with the game comes from the combat; there is little to no feedback as to how much damage you are doing. Unlike other God of War-esque titles, it isn’t satisfying to chop zombies up to pieces.

What’s worse is the overabundance of quick-time events to do various things, such as drive zombie corpses you’ve stuck Nick’s head onto. Nearly every encounter ends with one, either on a bad guy or on some element of the scenery in order to progress. It leaves the game feeling wholly unsatisfying to play, as you’re generally either in lacklustre combat or tapping buttons when the game tells you too.

The game is also packed full of collectables to find or buy. As well as various moves and upgrades that affect the game, there are also lollipops, costumes, music and concept art to acquire, often using the money collected from the legion of undead you have killed. Money drops like mad, so there is little worry about affording everything that improves gameplay.

Extra content like the costume and the background music are paid for with platinum coins, thus keeping useful and not useful items on separate currencies. In addition to the story mode, there is also a score-based ranking mode that allows you compete against others and, most importantly, see if you can beat Juliet’s Dad’s score.

You can’t mask crap with rainbows
Lollipop Chainsaw isn’t a very good-looking game. The overall design is admittedly fantastic, with a very distinctive style for each character and setting. The bosses and their arenas are all themed to one of each type of music, such as Viking boss and his heavy metal. However, on the technical side it just looks really grimy, with the lack of anti-aliasing making everything have very visible jagged edges.

The environmental quality also varies hugely, with some areas looking great with lots of incidental while other seem overly bare. That said, the menu art is very good, perfectly fitting the ‘50s look the game seems to be aiming for. Overall, nothing about the graphics really stands out, apart from the overuse of rainbows. 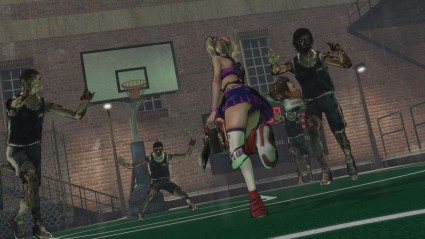 Warning: this game’s music will stick in your head
I do, however, like the sound design. The music is excellent, with a great choice of licensed tunes to back up the original background music composed just for the game. It just slips in a section from “Mickey” every time you use what can be equated to ultra-mode, which really helps to set the tone. I do have to warn that by the end of the game, you will probably hate the song “Lollipop”, as it’s played every time you use the in-game store.

Unfortunately, the character’s voice acting is hugely varied. The characters’ voices match up to the characters they are portraying pretty well, with Tara Strong being an excellent choice for the main character; while Michael Rosebaum is spot on as Nick, giving him the perfect tone of bewilderment as to all the crazy stuff going on around him. In fact, he probably is the funniest part of the game, as most of the time he echoed just what was going through my head.

What isn’t funny is just how grating Juliet and her younger sister’s voices are, and how repetitive everyone’s dialogue is. The worst example for this is when you’re in the boss battles. Juliet, Nick and the boss seem to have a list of four different sounds they can make, which makes each battle annoying to listen to.

Well, time to be heading off!
As you can probably tell, I really didn’t enjoy Lollipop Chainsaw. What little enjoyment I got out of the story and characters was ruined by repetitive combat, overuse of quick-time events and some of the most annoying voice acting I’ve ever heard. If you’re a big fan of Suda 51, you may enjoy this game, possibly. For everyone else, don’t bother.