I’ve thoroughly enjoyed my time with the Wii U so far, but it’s no secret that the system needs more heavy-hitting exclusives to get people on board. In the last six months the only games of note have been Super Mario 3D World and Donkey Kong: Tropical Freeze, and any mathematician will tell you that 1 + 1 = not enough.

There are few Nintendo franchises quite as irresistible as Mario Kart, however; and so it is with great relief that the eighth mainstream entry in the series finally arrives on our beloved multi-screened console. Can Mario Kart 8 help carry the flailing Wii U across the finish line, or is this one a non-starter?

With each successive iteration, Mario Kart brings a new way to race. We had two-seater karts in Double Dash!, online play in Mario Kart DS, bikes and motion controls in Mario Kart Wii, and flight and underwater racing in Mario Kart 7. Mario Kart 8 adopts all of these – with the exception of two-seaters, which Nintendo seems to want to forget about – and adds anti-gravity to the proceedings. Drive over one of the blue strips on the track and your kart’s wheels will flip up, transforming it into a hover vehicle that can drive horizontally and even upside down.

This new dimension allows for a lot of twisty-turny and loop-de-loop tracks. In practise, however, the most noticeable side-effect of this is a lot of alternative routes, as the rotating camera diminishes the effect of driving upside-down. As wacky as it would have been for the camera to be fixed and show you effectively racing on the ceiling, this would have been disorienting to say the least. As a result the feature is no game-changer, but combined with all of the previous augmentations to Mario Kart’s classic racing formula, races feel far from pedestrian.

As ever, Mario Kart 8’s roster of courses is split evenly between brand-new tracks and reinvented originals from previous entries, totalling a modest but not inadequate 32 to choose from spread across the typical eight Grand Prix cups. It’s great to revisit spruced-up favourites, although the new additions are the stars of the show. Nintendo have used everything at their disposal to make these as varied and creative as possible, letting you traverse across beaches, mines, castles, stadia, an airport and even clouds.

There’s a satisfying consistency to the quality of the courses, with a lack of any stinkers that’d make you groan every time they pop up in rotation. Every track is a lot of fun to race around, creatively mixing together flying, underwater and anti-gravity sections, with plenty of different routes and shortcuts to take to keep the action diverse. Even more impressive is the attention to detail in their visual design, whether it’s the shy guys feverishly working away in the mines of Shy Guy Falls; a giant molten-rock Bowser slamming down and causing ripples in the track of Bowser’s Castle; or the cotton wool fluffiness of the clouds in Cloudtop Cruise.

In fact, Mario Kart 8 looks nothing short of fantastic in general, and easily places itself as one of the best-looking Wii U games to date. Everything from the character models to the courses and special effects has a polished sheen and splendour akin to Disney Pixar films. It’s a joy to behold some of the older classic tracks which have been remastered for this edition, as they stay faithful to the originals in spirit whilst reimagining their aesthetics to such a degree that some are barely recognisable. The soundtrack is just as impressive, with an array of upbeat arcadey tunes that have an enjoyable jazzy flair.

In typical Nintendo fashion, Mario Kart 8 still feels very familiar to anyone who’s played earlier entries in the series, while iterating on various systems and features just enough to make it feel fresh. Boost starts, boost jumps, drafting and powersliding (although not snaking) make a return, and the new anti-gravity feature lets you boost whenever you hit another racer or boost post in the road.

There are several new powerups to add to your arsenal, including the self-explanatory Coin; the Piranha Plant which gives you intermittent boosts of speed and gobbles at items and opponents in front of you; the fireball-hurling Fire Flower; and the Crazy 8 which is like the Crazy 7 of the previous game but adds yet another item for even more ‘craziness’. Two compelling new additions are the Boomerang Flower, a multi-use weapon that can hit enemies both as it’s thrown and as it returns to you; and the Super Horn, a delightfully versatile item that not only knocks out nearby racers but can block any incoming attack, including the infamous Blue Shell. 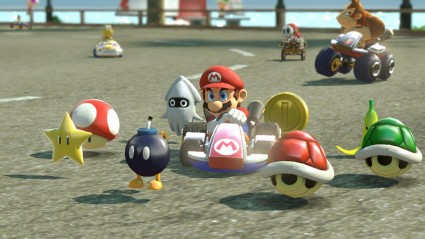 The Crazy 8, a super power-up with 8 different items. C-razy!

What’s impressive is the level of balancing this time round, despite these powerful new inclusions. Every item, save perhaps for the mediocre Coin, can be very useful in the right situation, and sparing distribution of the show-stoppers keeps it from being too unfair or frustrating. I can’t quite put my finger on why, but the dumb-fire Green Shell actually feels quite dangerous for once – I think it’s had a buff in size, speed and longevity – even if it still doesn’t quite match up to its homing red cousin.

There’s a healthy selection of 30 characters to choose from too, although my criticism here is with the perplexing number of baby and kid racers, including a full roster of the Koopa Kids. Most of the typical Nintendo favourites make an appearance, but an entire half of the character list consists of Bowser’s kids as well as baby and special versions of existing racers, which stunts the variety a little. Some more diverse and obscure choices would have been welcome, and it’ll be interesting to see if the roster is expanded through DLC at a later date.

The kart customisation option returns, letting you at least tailor your vehicle to your liking. As you earn coins throughout the Grand Prix you’ll unlock extra karts, bikes and components to mix and match. Some will no doubt choose the coolest-looking or most appropriate for their character, although I usually find myself selecting parts based solely on achieving my desired balance of speed, acceleration and handling statistics. Either way, it adds an enjoyable extra layer to character select. 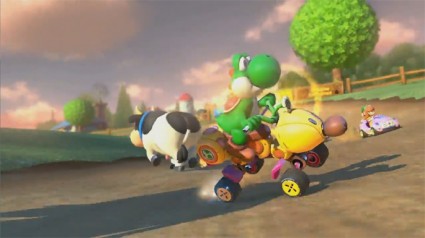 A green dinosaur riding a giant caterpillar. Because Nintendo.

Game modes are what you’d come to expect from Mario Kart, including the aforementioned Grand Prix as well as Time Trials, Multiplayer and Battle game types. I don’t think I even need to explain the first three, but Battle has undergone a surprising and disappointing rework. Rather than the chaotic, purpose-built battle arenas of yore, Mario Kart 8 instead uses shortened versions of standard race tracks. These are completely inappropriate for the game mode and come across as an afterthought, as if Nintendo ran out of time to create dedicated Battle maps and opted to just make do with what they had.

Thankfully, all other modes have the quality and playability that you’d come to expect from Mario Kart. Grand Prix is certainly no revolution and has the same structure as ever, but it’s enjoyable as it always has been – if a little easy at difficulties below 150cc – and three-starring all cups should keep you busy for some time. Time Trials is fleshed out with excellent ghost data integration, including the ability to challenge scores set by Nintendo employees and some of the best racers in the world.

Multiplayer races have always been a staple of the series, and here they certainly don’t disappoint. Split-screen is a fantastic excuse for getting a few mates round – there really aren’t enough split-screen multiplayers these days – although the framerate does halve itself to 30FPS when three or more players are involved. The potential of the Wii U gamepad is also oddly neglected here too, with no option to separate player one onto just their controller’s screen. In fact, usage of the gamepad in Mario Kart 8 is stunted in general, with the default setting consisting of tapping the screen to honk your horn. Frustratingly, however, the minimap is isolated onto the gamepad and cannot be displayed on the TV, meaning that other players cannot see it. This is bad design even from player one’s perspective, as having to look down at the screen to see the minimap is liable to cause a crash. 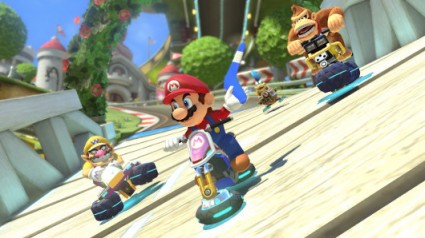 If you’re playing huddled round a TV with mates, prepare for bruised arms.

If you’ve not got any mates nearby, then the well-realised online multiplayer is a great alternative. The matchmaking system places you against regional or global opponents, before giving you the pick of four different courses which essentially puts your vote into a hat. Matchmaking is surprisingly slick and fast, and you can even select pre-made phrases to speak to your opponents in the lobby, all wholesome and Nintendo-approved, of course. Thankfully each race is a separate affair so you don’t have to commit to an entire four-race Grand Prix if you’re strapped for time.

The online connection is impressively solid. I have yet to experience any considerable lag, although a few disconnects have cropped up on occasion. With a player rank system that improves or worsens over time with your racing performance, the online multiplayer is one of the strongest parts of the package. You even have the option of playing Battle mode online, if you can bear its mediocrity.

Ahead of the pack

Nintendo basically invented the kart racer, and Mario Kart 8 shows that they still haven’t lost their touch over two decades later. A couple of missteps aside, like the disastrous Battle mode, unimaginative player roster and poor justification of the gamepad, this is a stunning offering which will keep arcade racing enthusiasts entertained for a long time. Mario Kart has never looked better, sounded better, or – dare I say it – played better. It’s unlikely that Mario Kart 8 is going to singlehandedly turn the Wii U’s fortunes around, but we can only hope that it will at least set the ball rolling.