Even as someone who’s never had the pleasure, I know that Ninja Gaiden’s brutal reputation often precedes it. Known for crushing difficulty and the need for continual mastering of combat to just about scrape through, it’s often seen as one of the last bastions of the hardcore gamer. That may have just changed with the latest iteration, courtesy of an Itagaki-less Team Ninja…

Of course, having not played the previous games myself, I’m in no position to compare Ninja Gaiden 3 to its previous majesty. With no prior point of reference, I can only review it for what it is and on its own merits.

It’s always terrorists!
Terrorists have taken over London and are holding some high-profile hostages. The authorities have no idea what their motives are, only that they’re asking that the renowned ninja, Ryu Hayabusa, makes an appearance. Ryu is flown in, asked only to rescue the poor people being held in his name.

Of course, it’s a trap. In a daring rescue, Ryu encounters a masked British man who imbues his right arm with the pained souls of everyone that he’s killed over the years. Ryu is then drawn into the scheme of a cult of alchemists, who plan on using him to kick-start the new world order… oh, and he gets to fight a dinosaur…

With this, the game seems to try and take a moralistic reflection on Ryu’s troubled past, but it never once hits the emotional heights that Team Ninja were shooting for, struggling both in basic storytelling and pacing.

It seems like they were aiming to tell a soulful story about the conscience of a troubled hero, but the sillier aspects only make that jarring. I mean, you see him reflect on the lives he’s taken; but then suddenly, mainly because of a little mute girl that he meets for all of ten minutes, he’s happy to slaughter more men in their thousands. Even those begging for their lives, I might add. I just didn’t get what point it was that Team Ninja were trying to make?

Then again, maybe I’m just missing the point. After all, I don’t know this character as intimately as others do; maybe I’m missing a trick from not playing the previous games? If someone wants to put me straight on anything I’ve misinterpreted here, please do so in the comments; because, at the moment, it’s just not hitting home. 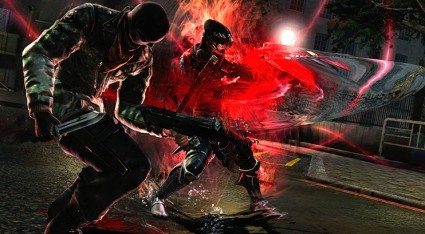 There's no dismemberment in this iteration...

Repetitive strain ninjary
On the face of it, Ninja Gaiden 3 is a hack n’ slash in the purist sense. Using a mostly two-button, light and heavy attack system, you’ll have to cut down huge swarms of enemies, room after room after room. By relentlessly hammering away at one particular foe, you’ll trigger a ‘Steel on Bone’ quick-time event, where you must tap an attack button to force your sword through the enemy’s stubborn bone. You’ll see this breaking up the flow of combat a lot, such is its overuse.

With every kill you make, you slowly fill a meter which, once full, can be used to summon a fiery dragon spirit. This circles the room, grabbing all enemies before devouring them and disappearing through the roof, whilst also replenishing your health in the process. It’s an easy way to clear a room if you’re getting overwhelmed.

That’s not the only trick you have up your sleeve (literally) to buy you some breathing space, either. After Ryu’s arm becomes infected with the curse, instead of punishing him as the game would have you believe, you can use it unleash a devastating attack when it glows red. This sees him running as many enemies through with his blade as he can in the allotted time.

With the rest of the game mechanics made up of shurikens, a seldom-used explosive bow, cheap quick-time events and some mediocre level navigation, NG3’s biggest problem here is that it’s just not that much fun.

For a start, although combat works, it’s very easy to feel completely detached from everything you’re doing. It looks flashy and slick and everything, but it was a rare moment where it actually felt like I was in control of it. None of the series’ famed difficulty is on display here, either, with the game practically beatable with repetitive button mashing. I make no exaggeration when I say that I spent 90% of my playthrough mindlessly mashing the X button while watching my wife play the vastly more interesting Silent Hill Downpour… Only occasionally did I actually have to pay attention to my actions with certain enemies or in boss fights, and those moments were gone almost as quickly as they came.

While the game at least works, after the first few levels it fast becomes this predictable grind; another locked room, another wave of samey enemies, only ever using the same tools. There’s the argument that some repetition is part and parcel of the genre, and that’s true to a degree; but the game is crying out for something, anything to come along and change-up the formula.

Something as simple as attack unlocks, weapons upgrades or new abilities would help the game’s case immeasurably, but they never come. 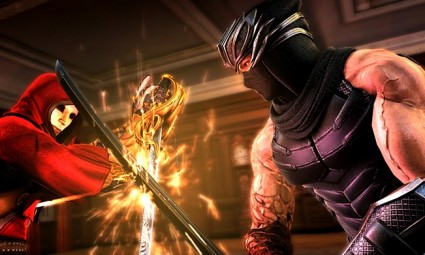 Bloody hell…
Ninja Gaiden 3 looks… okay, for the most part. It has that typical Team Ninja/Dead or Alive look to it, especially with slightly blank character models. However, there are plenty of bland, even washed out, textures on display when it comes to the environments.

At the very least, the game strives to take you to several, vastly different locales. The streets of London, deep jungles, laboratories and temples all help to keep your experience of blood-splattered battlegrounds varied throughout. It’s probably about as interesting as it could be in that respect. There are no technical issues to report, either, as it runs pretty damn smoothly, no matter how big the scale or how many enemies that Team Ninja throw at you.

The game is not afraid to splash the claret around either, though it does stop short of total dismemberment, which I’m told is much to the chagrin of series fans. Having not played the previous games, it’s unfair to have that sit as a criticism from my point of view, but it’s worth mentioning, simply for those that know what came before.

Go Ninja, go Ninja, go!
The game does at least sound the part, with satisfying thuds of impact as your blade hits its target. The enemies soon start to grate, though, as they repeat the same few lines over and over. There are only so many times you can hear ‘It’s a ninja!’ before you want to pierce your eardrums. We get it! He’s a fucking ninja! I don’t need it audibly reinforced every few seconds; the word is in the title!

When it comes to cut-scenes, the rest of the voice talent on display is fairly decent, despite the minimalist but bat-shit crazy script. It’s all slightly awkward in the delivery too, but you tend to expect that of this type of Eastern developed game.

As for the soundtrack? Well, it must have quietly done the job, because I can’t think of any particular complaints, but I certainly can’t think of positive comments to say about it either. It’s just there, sitting in the background and usually providing a light, fast-paced break-beat to keep things ticking over. 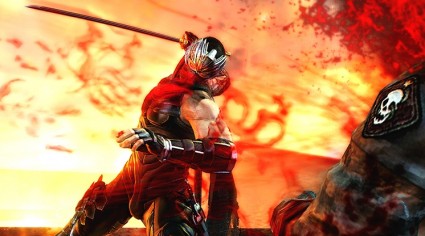 The game runs out of ideas real fast...

Never work in a team…
A first for the series (as I understand it) is the implementation of an online mode, and to be honest, they needn’t have bothered. There are two modes on offer; a set of co-op missions and 4v4 deathmatches.

First of all, the co-op mode is as close to a Horde mode as you’re going to get, seeing you and another budding ninja trapped in an arena, killing everything that spawns while also fulfilling ‘contracts’. Contracts are menial tasks, such as performing a certain move, or using a shuriken on an enemy before you kill them normally. These recycle many times over the course of a round, but completion adds to your score. Trust me, because the combat is identical to the campaign, it’s less fun than it sounds, but it’s ten times better than the Deathmatch mode.

Unfortunately, this mode isn’t exactly buzzing with users at this point either, and you could be waiting a while to find a willing room. Once you can actually get into a game, you’re given a ninja’s playground with areas to run, climb and jump from. Your only aim is to kill members of the opposing team as many times as possible before time runs out.

While again, much of the combat is carried across from the single player game, it’s completely un-tailored for multiplayer. It’s messy, lacks grace, and just isn’t a lot of fun. You do have one new trick, though; by walking slowly you can turn invisible, Predator style. A useful skill for a ninja, you’d think, right? Wrong. Somehow, when you turn invisible, you’re actually easier to spot.

Adding to the pointlessness of it all, just like the campaign it fails to reward you suitably for putting your precious time in. As you level up online, you’ll only ever seem to unlock superficial, aesthetic upgrades, rather than offering you new, interesting ways to experience the game.

Suffice to say, I spent minimal time in this portion of the game. If you want to feel like a ninja online, do yourself a favour and play Assassin’s Creed.

Cutting
Although never at any point broken, Ninja Gaiden 3 is simply a painfully average hack n’ slash game that fails to excite or engage the player. Don’t get me wrong; there is some mindless fun to be had here and there, but the combat lacks the finesse, the depth and challenge of something like Bayonetta, Devil May Cry or Heavenly Sword. While those vastly superior games keep evolving the further you play, Ninja Gaiden 3 is just happy to plod along weakly with its one trick, hoping that it’s enough. It’s not.

If the previous games really were part of some elite series, worthy of the highest praise, as a newcomer I can only assume that none of its merits are evident in this showing.