With the existence of fighting game Persona 4: Arena, and last year’s 3DS excursion Persona Q: Shadow of the Labyrinth, it’s clear that Atlus love a good Persona 4 spin-off. Having reviewed both of those games and Persona 4: Golden, to be quite fair, so do I. That said, being neither a massive fan of rhythm or dancing games, I had written off any interest in Persona 4: Dancing All Night way ahead of its recent release.

Circumstances, however, meant that the responsibility of review would ultimately fall at my feet, and having now played it extensively, I’m so very glad it did. You see, it turns out that I hadn’t considered one very important factor about the prospect of a music game based on Persona 4: Persona 4’s soundtrack is fucking incredible, and makes the reality of Dancing All Night vastly more appealing than I had given credit for.

Persona 4: Dancing All Night is, in itself, fairly simple to get to grips with. During a performance, icons will move outwards from the centre of the screen in one of six directions. Your job, as you might expect, is to match the icon with the appropriate button-press in time with the music, using either the three left-most directional buttons or the right-most face buttons. There are obviously situations that require simultaneous presses, or a long hold of a button before releasing at the right time, exactly as you might have experienced in any other rhythm game.

Landing a hit successfully produces a satisfying ‘clap’ effect, and thus your involvement towards the music boils down to providing an extra layer of percussion. The feedback this provides is wonderfully accurate; if you’re slightly late or early on a hit, even enough to get a ‘Good’ or ‘Great’ rating, the clap will be just out of time. This worked wonders in encouraging me to tighten my game: Getting good scores means only endeavouring for the best audible experience.

When paired with the music featured – a selection of the strongest, catchiest tracks from the incredible Persona 4, plus plenty of fantastic remixes – tapping out the button combinations in rhythm and trying not to be distracted by the psychedelic backgrounds, especially on medium difficulty or higher, is a ton of fun. 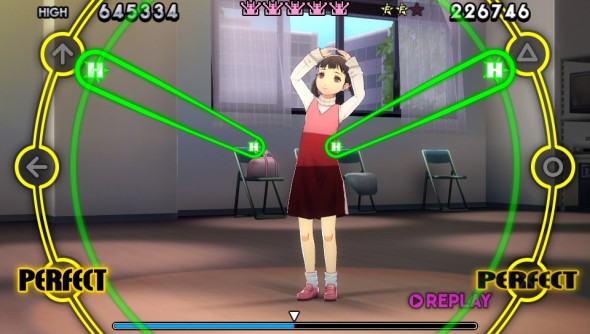 Nanako dancing to the Junes theme is literally the best thing ever.

Keeping you on your toes further are scratches. Regularly, in time with the music, a blue circle will radiate from the centre, and here you simply need to flick the analogue stick at the right time to trigger a ‘scratch’ sound effect. These sound great when landed perfectly in the middle of a complicated portion of song, but they’re entirely optional; failing to hit them won’t count as a ‘miss’ or harm your combo, but they do act as effective score boosters.

Some of those rings will appear bigger and multi-coloured, and these are ‘Fever Rings’. Triggered in exactly the same way as scratch rings, successfully hitting three will trigger ‘Fever Mode’ at a predetermined point later in the song, further boosting your score. Delightfully, in keeping with Persona 4’s thematic focus on the power of friendship, triggering Fever Mode brings in another cast member to dance alongside your current hero, while the heavily animated and colourful stages turn it up another notch.

There are only two ways to play Dancing All Night Long, the Story Mode and Free Mode, but thankfully there’s plenty of fun to be had with both. The story takes place shortly after the events of Persona 4, as the investigation team reunites to act as Rise’s backup dancers in her showbiz comeback during the Love Meets Bond Festival. It’s not long before things start to go awry as members of Rise’s rival group, Kanamin Kitchen, go missing just before the show. Inevitably, devious shadows are involved, transporting the team to the Midnight Stage (rather than the Midnight Channel), where they’re forced to dance for their lives.

Thankfully, with the plot being told not through gameplay, but rather a combination of superb, fully animated cut-scenes and visual novel-style sequences, the story is thoroughly entertaining once it gets into its stride. Just as I’ve experienced in the other P4 spin-offs, seeing these characters again is just like catching up with old friends, and the dancing theme, weirdly, never feels contrived, which it absolutely should.

Free mode does exactly as it suggests, but there is a decent sense of progression as many of the best songs are unlocked by working your way through the playlist. Thanks to in-game currency earned following every completed song, you can spend to customise your experience in Free Mode, although mostly superficially. There are different costumes and accessories to buy, so you can dress Chie in her yellow ‘game of death’ jumpsuit or give Yosuke different headphones, but some of the outfits are – for both the boys and the girls – a little inappropriate given their supposed age-groups. This was the only sour point I had in a mildly enjoyable, if inconsequential, aside. 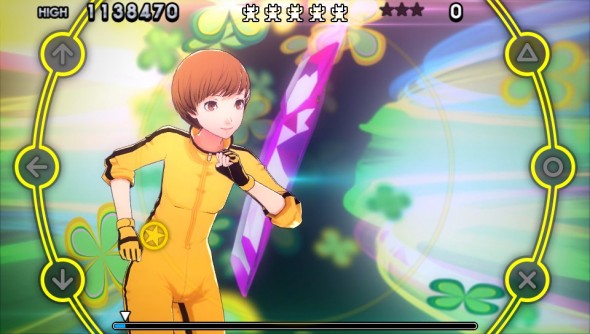 Of course, any music or rhythm game lives or dies by the strength of its soundtrack and, as I hinted at earlier, Dancing All Night does not disappoint. Aside from the standard versions of some of my favourite tunes from the core game, there are a number of phenomenal remixes in a variety of musical styles, and there’s not a stinker among them.

There are big band, jazz-infused gems, like the slower, reworked “Like a Dream Come True“, and as a former house DJ, I would have loved to have been able to play the dance remixes of “Pursuing My True Self” and “Best Friends” during my sets over a decade ago. My absolute highlight, however, is the Pendulum-style breakbeat version of “Time to Make History“ by Silent Hill composer Akira Yamaoka, who really showcases his versatility with this track.

Lastly, and I just have to mention this, there is a full-length version of the Junes theme. Yes, Nanako is the one who gets to dance to it, and yes, it is every bit as adorable as it sounds. Brilliant!

Persona 4: Dancing All Night is one of those games this year that I didn’t even know I wanted, but now, having spent many a night bopping away to its colourful charms, I know that life would seem incomplete without it.

Thanks to solid mechanics that encourage self-improvement, another enthralling Persona plot featuring one of my favourite video-game teams of all time, and a faultless soundtrack that stuck in my head for hours after I’d put it down, I’m pleased to report that Persona 4: Dancing All Night hits all the right notes.