While I’ve enjoyed a number of JRPGs over the years, I’ve been one of the genre’s staunchest critics. I mean, as much as I’ve appreciated games like Lost Odyssey, Eternal Sonata, and yes, even both entries numbered XIII in the recently maligned Final Fantasy series, I just wish more developers would stop playing it so… safe.

As a result, I’ve become a little detached from the genre, and only occasionally does a game like the exceptional Ni No Kuni come along and make me question my own ignorance. Well, more fool me. It turns out that the different, brave and ambitious JRPG I always wanted has actually existed since 2008, and it’s called Persona 4.

With the re-release of Persona 4: Golden on Vita, I’m very pleased to say that I’ve seen the error in being so instantly dismissive. I missed a wonderful game five years ago, one that’s now possibly my favourite RPG ever…

Persona 4 takes a vastly different approach to the types of JRPGs that you’re probably used to, and that’s evident as soon as the story begins. Rather than placing you in the typical fantasy setting, you play a young city boy transferred to the rural town of Inaba to stay with his uncle while his parents are away for a year.

What starts as a peaceful school life in a small town is swiftly interrupted as Inaba is rocked by a succession of murders, and it becomes apparent that the victims are inexplicably appearing on TV around the same time as their disappearance and eventual murders. After the protagonist discovers that he can actually travel through a TV set into the locations shown, it transpires that this “TV World” is actually the killer’s weapon. Just who is throwing people in and why? Your nameless avatar and his new school chums set about trying to work out the puzzle, while rescuing those unfortunate enough to be targeted. Can they do that and still get through the school year? Well, that’s up to you.

Not only is the gritty-sounding plot instantly refreshing; the whole thing is incredibly well written. With a slick charm and a dark sense of humour, the game tackles many relatable issues, with an over-arching theme of coming to terms with personal traits that you might otherwise try and run from. As a result, each member of this amazing cast goes through a personal journey over the course of the game as they seek to find their place in the world. Each is likeable, deep, multi-layered and a far cry away from the cookie-cutter line-ups found in most of the genre’s output. 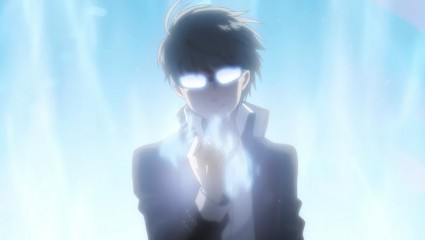 The protagonist is a blank canvas for you to project onto.

When a mundane life equates to an amazing game…
Persona 4 really sets itself apart from its peers in the way it progresses. There are no sprawling environments to explore, and you won’t happen upon towns and villages. Instead you live your character’s life throughout his school year, day by day, and how he spends his time each day is entirely up to you.

This means that when you’re not adventuring and trying to save victims before they meet their grisly ends, you’ll be attending classes, doing exams and making friends, before choosing how to spend your evenings. You could catch up with your school friends, get a job, catch a movie or venture into the TV World to grind. You dictate everything.

When you do choose to travel into the TV World, you’ll be tackling randomly generated dungeons (as they become available after folk get kidnapped), as you battle your way up several floors to get to the boss. In battle, your party will be relying heavily on using their Personas; mystical elements of the user’s being that can fight and attack for them in combat. Each party member has one Persona which lends them a range of elementally focused powers, but as the leader you can forge new Personas by fusing existing ones (which come as part of the post-fight loot), as well as change your Persona in the middle of a fight.

The combat itself is the only thing that’s traditional about this JRPG, played out in turn-based battles that uses the basic menu systems that you’ve always been used to. The strategy here is excellent, though, with most creatures burdened with a particular weakness that can leave them downed and ready for a big ass-kicking. It’s also worth toying around with the members of your battle party, as some pretty amazing things can happen over the course of a fight if you have the right mix of four. 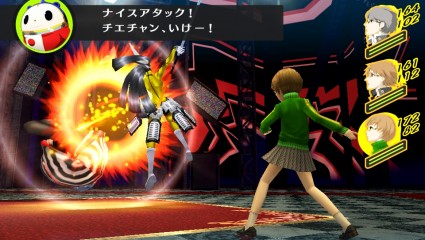 The battles are strategic and never anything but fun…

While the day-to-day options spent outside of the dungeons sound like mundane exercises, they’re far from it. Each action, each relationship and each job or task has a reward. For example, improving your friendships not only advances a character’s individual story, but it also improves what the game calls a Social Link. By increasing Social Links, you’ll be able to create more powerful Personas, and doing this with your party members in particular, you can unlock some uniquely nifty and powerful abilities to use in fights. The thing is, benefits aside, these characters are so well realised that you’ll want to spend as much time with them as you can.

You’ll get plenty of time to spend doing just that, with the game taking me a whopping 85 hours to get through on the first playthrough (hence our late review!). It never once feels that long, though, always offering something interesting to do. To see absolutely everything (and you’ll want to), you’ll need to hit that NG+ after completion, which can add another 30-40 hours if you skip all the amazing dialogue. I restarted the moment I finished it, and I rarely do that with any game, let alone a JRPG.

As part of its re-release, Atlus have gone the extra mile and thrown in some extra content, but the most interesting new inclusion is its online/social element. If you’ve got an internet connection handy, at any point you can see how other players chose to spend their free time, and when in dungeons, you can send out an SOS and call in healing aid from other available players. It’s a smart inclusion that never once intrudes on your own experience.

Not bad for a PS2 port!
While Persona 4: Golden is ported directly from the PS2, don’t let that fool you into thinking that this is an ugly game; it’s very far from it. What it lacks in modern-day fidelity and textures, it more than makes up for with a sleek and stylish design that’s entirely its own. There’s a lovely contrast at play too, between the grey, more grounded look of Inaba and the colourful and warped locales of the TV World.

The visuals are bolstered heavily by brilliant anime flavouring, whether that’s when you’re in dialogue as slightly animated images of your cohorts grace the screen, or the utterly gorgeous anime cut-scenes that occur occasionally throughout.

Golden records
For the wrong ears, games that utilise nothing but the happy, infectious nature of J-Pop have been known to irritate after a while, but somehow Persona 4 never suffers in this way. Every track included is a catchy gem that you’ll come to intimately associate with the different areas of Inaba and the TV World, while the handful of songs used for combat became particular favourites of mine.

For a Vita game, there is also a ridiculous amount of audio contained on this little card, and it’s all performed delightfully. Each character has been impeccably cast with a voice that suits their personality; without stereotyping too, I might add. 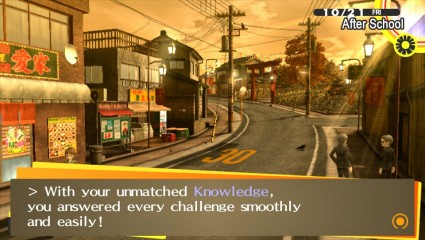 Inaba is the unlikely location of your adventure.

If there were Persona 4 bed sheets, I’d ruddy well buy them
Last month I reviewed Ni No Kuni: Wrath of the White Witch and declared it as one of the best RPGs I’ve ever played. I couldn’t have imagined that just a month later Persona 4: Golden, essentially a five-year old game, would beat it and then some. There are just so many strong elements at play here; excellent storytelling, relatable characters, addictive combat, and one hell of a murder mystery. Atlus have brought it all together in a way that no other JRPG developer could, providing a more organic, choice-laden adventure than your usual genre effort.

It’s so good, in fact, that I’ve since gone from being completely ignorant to the series’ existence to becoming an utterly rabid, flag-waving Persona 4 fanboy. I’ve beat the game, I’m watching the anime, and being a fighting game fan, I cannot wait for spin-off fighter, Persona 4 Arena, early next month. Bring it on; I’ll take all the P4 I can get.

If you’ve never had the pleasure or have become bored of JRPGs as I had, then I can tell you, incontrovertibly, that you need Persona 4: Golden in your life.