Persona Q: Shadow of the Labyrinth

I was, unfortunately, a latecomer to the Persona series, my first exposure being the charming Persona 4 Golden on Vita, yet its discovery and timing was extremely important to me in terms of my relationship with JRPGs. Prior to reviewing P4G for TIMJ, aside from one or two exceptions, I had grown incredibly tired of certain JRPG conventions. Thanks to its unique setting and wonderfully written characters, however, Persona reinvigorated my love for an entire genre.

Obviously, when offered the chance to revisit these characters in the 3DS exclusive spin-off, Persona Q: Shadow of the Labyrinth, I was totally on board. What I found was a very different brand of Persona experience, but one that captivated me enough that I gave it my vote for Game of the Year in our 2014 End of Year series. Upon finishing it, that view has not changed.

At the very start, you’re given the option to pick between the protagonists of Persona 3 and 4, and your choice here basically dictates which set of characters you’ll open the adventure with. No matter who you pick, you start at an undetermined period during their original storylines before a strange bell ringing in the distance transports them to alternative, twisted version of Yasogami High during a Culture Festival.

Here, rather than every classroom being decorated according to its cultural theme, each is a doorway to a deadly dungeon full of shadows, puzzles and, most importantly, clues as to how they can get home. Two massive clues come in the form of amnesiacs Zen and Rei. Clueless as to whom or what they are, the pair decides to help the team battle through the four dungeons in the hope of recovering their lost memories. What follows is a truly charming 100+ hour adventure that, in usual Persona style, focuses on the power of friendship.

Obviously, with Persona 4 as my only major reference point for the series, I opted to start Shadow of the Labyrinth with Inaba’s infamous Investigation Team, which in both the strangest and nicest way possible was just like catching up with old friends. When the other team eventually joins the fray, however, it’s seeing how both groups interact and forge new dynamics that becomes the most interesting aspect. 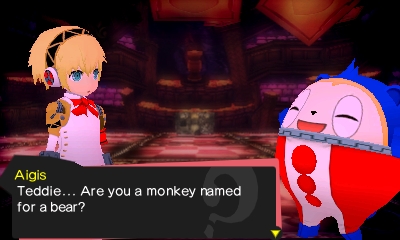 Kanji, for example, continues to be one of the strongest, most complex characters in video-games, taking pity on young Ken and looking out for him in his own socially awkward way. Teddie still thinks himself something of a Casanova and fancies his chances with the new ladies (who work him out from the off, obviously), but it’s his ongoing jealous rivalry with the canine Koromaru that brings the most mirth. All of these characters are brilliantly written and in a way that at least one will resonate with you. In the midst of this, Rei and Zen’s stories can get a bit lost as, without memories, they have no real history, but out of the two it’s Rei that leaves a lasting impression thanks to a plot shift in the final quarter.

Unfortunately, the delightful dialogue counts for very little that’s tangible in Persona Q where, without the inclusion of Social Links to boost the level of your personas, the meat of the game focuses on dungeon exploration, fighting battles and puzzle solving. Thankfully, those three aspects are fantastically woven in and together form an addictive rhythm that makes it hard to put down.

Exploring dungeons was where the main differences took me by surprise. Played from a first-person viewpoint, Persona Q takes a classic, grid-based approach to exploration and is – I’m told – pretty much an entry in another Atlus series, Etrian Odyssey, sharing many of its traits. Having never played Etrian Odyssey, I wouldn’t know, though it does seem to be very similar to the little I’ve played of the first Persona, and other grid-based RPGs such as Legend of Grimrock.

Like in old-school RPGs, you’re required to draw in your own maps, here using a stylus and the bottom screen instead of old-fashioned graph paper. You’ll be noting dead ends, item hot spots, doors and puzzles, plus events that might lead to side-missions later on. Getting through the dungeon floors often can be a bit of a puzzle in itself, but thankfully they are littered with shortcuts that, in most cases, become active once you’ve beaten a fair stretch. This means that backtracking for a side-quest is never a chore.

A lot of the puzzles involve an enemy type known as ‘Field On Enemies’ (FOEs), which you should generally avoid confronting. Each type, themed around its given dungeon, has its own movement patterns that you must work out how to slip by or use to your advantage. Card soldiers in the first dungeon, for example, move a space forward in a set path with every step you take, whilst others later on will make a beeline for you, or jump to very specific squares. FOEs offer a welcome chance to engage your brain and although some of these puzzles can be extremely challenging, sometimes annoyingly so, they’re a good shift from the usual grind of random battles. 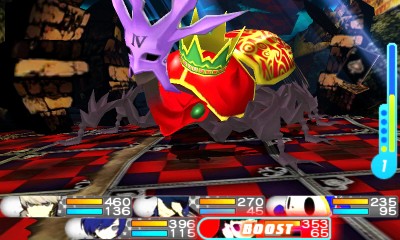 It’s in the battle system, though, where Persona Q most feels like Persona, with traditional turn-based combat and an emphasis on finding an enemy’s elemental weakness before exploiting it. In standard Persona games, doing so will bag you another attack, but here it allows you a cost-free attack on the subsequent turn, providing you don’t get hit in-between. Because of this, especially in regards to bosses, battles are brilliant, strategic affairs that require you to think ahead, spot patterns and account for any damage you might take. Pro-tip: Make sure to level Naoto as much as possible. Once she gains her Dark and Light instant kill attacks, fights against standard enemies can be over in mere seconds.

Yasogami High acts as the menu-based hub that you’ll retreat to when you’re in need of healing which, especially during the first dungeon, you’ll be doing quite a lot. Persona Q can be pretty punishing, though by the time that first dungeon is conquered, you should be set-up nicely for the next one. When back at Yasogami you also can sell materials to raise funds, buy better gear and items, fuse better Personas, and chat to your group if the option is available.

More importantly, you can also pick up ‘Missions’, side-quests that provide great XP pay-offs for your entire squad upon completion, not to mention some sweet gear too. They can range from going back into old dungeons to find items, battling FOEs or other particular enemies, to simply using the ‘Stroll’ option to chat something out with a classmate and offer assistance. Taking on each one is more than worthwhile and, especially in the cases of FOEs and sub-bosses, are brilliant fun.

Already steeped in yet another abundantly colourful, Persona charm offensive, somehow Shadow of the Labyrinth manages to be even cuter. The cast are drawn in a super-stylised, simplistic manner compared to the core series, stopping short of looking like chibi caricatures, but the result provides Persona Q with its own sense of identity. The design of each dungeon is twisted and interesting, and although the scenery is simply a texture swap, each fits thematically in a way that makes a lot of sense by the end.

The Persona series is renowned for its awesome soundtracks and, true to form, Shadow of the Labyrinth impresses with more phenomenally catchy J-pop infused with elements of jazz, rap, metal and dance. Unlike in Persona 4, there’s only one song for battles (barring boss fights), but a true testament to its quality is that even after a hundred hours, I was still happy to hear it again and again.

Thanks to an engaging, challenging combat system, old-school dungeon crawling and terrific characters, I’m not sure that Persona’s first appearance on a Nintendo console could have gone any smoother. It’s true that it doesn’t quite match the heights of the core series, but it is a tremendously fun RPG in its own right, and one that I found hard to put down.

The highest compliment I can pay Persona Q’s quality is in how quickly its hours seemed to fly by. I racked up well over a hundred and it felt like barely any time at all.