It’s not uncommon for established franchises to diverge into a completely different genre for a spin-off, or even a permanent change of direction. We’ve had a Metal Gear Solid card game, a music rhythm Final Fantasy, and Dead Island as of late seems to want to dip its rotten toes into as many genres as possible. That said, it can still be alarming when a franchise we know and love takes a surprise step into unfamiliar territory.

It’s for that reason that when Plants vs. Zombies: Garden Warfare was announced, I couldn’t help but do a double-take. Plants vs. Zombies – a touch-screen optimised tower defense game that helped pioneer mobile gaming – was now becoming a third-person, class-based console shooter? Garden Warfare invaded the Xbox family of consoles with moderate success earlier this year, however, gaining some detractors but also a lot of fans along the way. You can read Matt’s thoughts on that. Now the game has fully bloomed and crept its way on to the PC on which I’ve finally been able to try it for myself, and I’m pleased to say that PopCap has allayed my fears completely.

Even though Garden Warfare is a complete genre-shift for the series, it’s still very much Plants vs. Zombies at heart. You’ll recognise all of the playable characters as both friends and foes from the tower defense original, and everyone’s favourite nutter, Crazy Dave, also makes a return. The bitter rivalry between greenery and the living dead is stronger than ever, and the new third-person shooter format feels more liberating and chaotic in comparison to slow-moving, rigid lanes.

Garden Ops feels the most familiar, in which you team up as the plants to protect a garden against waves of A.I.-controlled zombies. There’s a good variety of stages, plant defenses and randomised boss waves to keep the mode feeling fresh and different every time, although after a while you’ll get the competitive itch and want to face human opponents. 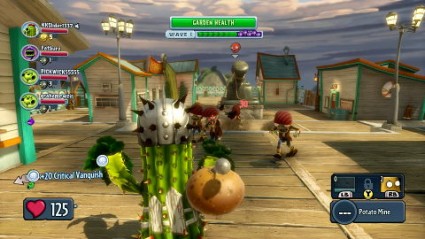 Plants? Check! Zombies? Check! I guess this really is a PvZ game after all…

Thankfully competitive multiplayer is where the game excels, with a selection of modes that will be recognisable to shooter fans. Team Vanquish is your typical Team Deathmatch, and a ‘Welcome Mat’ variant for beginners eases you gently into this. Vanquish Confirmed is an obvious nod to Kill Confirmed from Call of Duty, whilst Gardens and Graveyards is an objective-based mashup of Battlefield’s Rush and Conquest modes. Garden Warfare also draws inspiration from Obliteration with the humorous Gnome Bomb gametype, in which you cart an exploding gnome to enemy bases.

Far from the realistic battles of these first-person shooter staples, however, the zany selection of classes and weapons feel much more in-tune with Team Fortress 2. Each character feels distinct with their own set of stats and abilities. Play as the frail Sunflower and you’ll be skirting around foes and healing teammates with sunlight, whilst the deadly Chomper burrows underground and swallows enemies whole for a one-hit-kill. On the Zombies side, you’ll be able to choose from characters like the Engineer equipped with mines and drones, and the All-Star who wields a heavy machine-gun and sprint tackles opponents. Needless to say, the diversity of classes keeps the battlefield unpredictable and exciting, and gives you plenty of different play styles to practice and master.

Garden Warfare shares another trait with its Valve team shooter peer, and that is in its visual style. The world bleeds colour and charm, with cartoony levels and characters that are obsessively animated down to every last pixel. Plants and zombies dash and bounce around with exuberance, to the point where the game is a joy to simply watch. TF2 hat fans will also be pleased to hear that many aspects of your character are customisable, with a huge array of skins and accessories that range from cute to ridiculous. 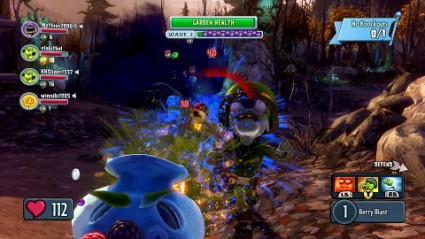 It’s obvious to see the many points of inspiration that Garden Warfare has drawn from, but it would be a disservice to call it a clone. It deftly weaves together successful ideas whilst staying faithful to the franchise’s source material, a melting pot that is reassuringly familiar yet completely unique all at once.

One interesting system which Garden Warfare hinges on is collectible playing cards. Playing matches earns you coins, which in turn can be spent on a variety of card booster packs. Inside you’ll find cards that give you plant defenses to use in Garden Ops, character accessories and card sets which unlock new characters on completion. Rather than a linear unlock path, these are a clever way to introduce the element of surprise into earning new items and rewards.

Unfortunately the card system has left a bitter taste in some people’s mouths for one reason: there’s the option of microtransactions with which to buy in-game coins and unlock items quicker. This system will be familiar to anyone who’s downloaded free-to-play games on their smartphone, but the difference here is that Garden Warfare is not free.

While the backlash here is understandable, it’s ultimately unwarranted. Just like Battlefield shortcut packs, the microtransactions are an option, but nothing more. Paying money will help you unlock items quicker if you’re strapped for time, but it won’t really give you much of an in-game advantage. Coins are awarded at a generous rate through normal gameplay, and the average player will arguably find it more rewarding to put in the time and unlock everything naturally. 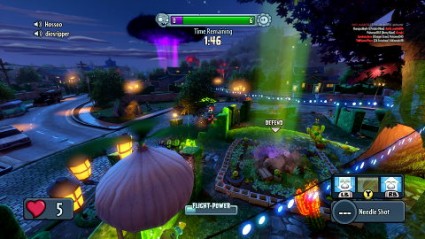 The Cactus can fly this nifty little garlic drone to rain stinky hell from above.

One flaw I found, on my system at least, was with the keyboard and mouse controls which felt noticeably sluggish and unresponsive. Your mileage may vary, but plugging in an Xbox 360 controller was like night and day for me – Garden Warfare was initially designed with consoles in mind, and it shows. With a controller plugged in it’s a dream to play, making it one of the rare shooters I’ve found better to play with this method.

Other than this blip, the PC port is well-realised and has presented no other technical issues. As with playing any game on a souped-up machine you’ll enjoy Garden Warfare at its crispest and smoothest. Yes, you can bask in the smug glow of knowing that what you’re seeing is true 1080p at 60FPS, as opposed to upscaled 900p on the Xbox One, and a paltry 30FPS on the 360.

Garden Warfare is a solid package all round that’s enjoyable to play whilst planting hooks to keep you interested in the long-term. If there’s one other point to bear in mind – and this can’t really be levelled as a criticism – it’s a very multiplayer-centric experience. There’s not a lot here for solo players, unless you fancy tackling Garden Ops on your lonesome… and that’s no fun.