When Plants Vs. Zombies: Garden Warfare got its first airing, I was worried. Plants Vs. Zombies is a great mobile title that achieved huge success. To see EA come along, buy the developer and then announce a team deathmatch spin-off, it didn’t sound like the greatest of starts.

Well, that’s exactly what happened. Plants Vs. Zombies: Garden Warfare is a 3rd person team deathmatch featuring all the charm and wackiness of the iOS favourite. Do dancing zombies, happy sunflowers and crazy people named Dave make for a good online shooter?

Strangely, yes they do.To start with, PvZ: Garden Warfare looks pretty great. Playing on the 360 version (as it’s also out on Xbox One and PC) I was immediately taken by how vibrant and detailed the characters were. Everything’s animated in an entirely over the top and cartoony way that suits the PvZ setting and makes this shooter stand out amongst its brown and grey peers.

The attention to detail isn’t limited to the characters though. The locations you’ll be running around are just as vivid as the plants and zombies. A variety of locations are on offer, ranging from a bright town centre that needs its gardening supply store protected, to a graveyard covered in a ghostly purple haze. They’re all great to look at and fun to figure out. The maps work well as they all offer plenty of ledges, alleys and vantage points to look out for and protect. They’re also full of plant pots and tombstones. This is a Plants Vs. Zombies game after all.

As you may well know, the original Plants Vs. Zombies was a lane defence game where you’d plant some flowers and they’d defend your house from a horde of zombies. PvZ: Garden Warfare manages to incorporate some of the original game’s ideas into its deathmatch gameplay by using the previously mentioned plant pots. When playing as a plant, you can grow your own leafy defenders who will do their best to take out any undead monster that gets too close. Conversely, when playing as a zombie you can simply summon more minions to go and chew on the roots of your foes. 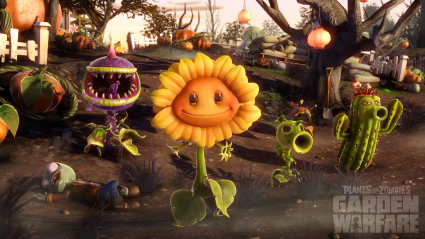 These are some roots that can manoeuvre.

It should go without saying that Garden Warfare also focuses on you shooting your opponents. You’re not just playing as an angry Alan Titsmarch here. It’s more like you’re a green-fingered Rambo.

Your character, except for the Chomper, will have a gun of some sort. Some of these guns will be rapid-fire, some will be long ranged and others will be bazooka-like. Shooting feels a little ‘light’, as there’s no real recoil from firing your weapon. Take into account the floaty movement of your character as well and you have combat that lacks the punch of your traditional shooter. This is no doubt a decision made to make things ‘user-friendly’ though may be a little off-putting to those used to Call of Duty or Battlefield.

This idea of combining tower defence and shooter mechanics shouldn’t really come as a surprise. A number of successful FPS games have had horde modes and some of Left 4 Dead’s best moments were about surviving wave after wave of zombies while you waited for a form of rescue to turn up.

Weirdly, for such a cute looking and child-friendly game, it shares a lot in common with Left 4 Dead, including its class system. Where most games have the same classes for each team, both Left 4 Dead and PvZ: Garden Warfare manage to offer completely different characters to play as depending on which side you’re on. 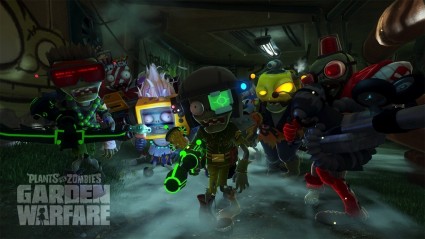 A wide range of classes, yet the game maintains balance.

These classes manage to balance out despite being wildly different from each other. The zombies get a rapid-fire and damage soaking football player, but that can be easily outdone by a plant that devours zombies whole. You’d think that the plant that can kill you in one chomp (it’s called a Chomper) would be overpowered, but it’s fairly slow and can be taken out by a jetpack wielding zombie class that outmanoeuvres most plants. That jetpack allows you to reach vantage points and zip about the level, though when you come up against a sniper cactus, you’ll be swiftly taken out. The cactus soon comes into trouble when up against – and so it goes on. With both plants and zombies having four classes each, it’s really impressive how these all stack up against each other and add a layer of strategy to what could easily have been a mindless ‘kids game’.

The only downside to the focus on multiplayer and balancing of these classes is that the game is purely that. A class-based multiplayer game with no single-player component. Whilst it’d be foolish to talk about what a game isn’t, it’s hard not to feel slightly let-down as even Left 4 Dead (which was also all about online multiplayer) had an offline option. To not even have that is a bit of a shame.

That being said, there are a good number of online modes to take part in. They all resemble modes you’ve played before in other online games (capture the flag, protect the thing, kill each other, etc) but they’re well executed and offer variety and value to the whole package. There’s also extra value to be had when you look at the support the game’s been receiving post-launch. Recently, a free DLC pack called ‘Zomboss Down’ was released, for free, containing new maps, new modes and new items. There’s been no announcement of further content, but it seems that Popcap are going to continue supporting this title for a while still. This means more hats than you can shake a Team Fortress 2 at!

That’s correct. You didn’t think a class-based shooter would be without options to plonk glasses, hats and tattoos onto your avatar, did you? There’s tons to unlock and like the rest of the game these items are usually really silly and just good fun. Why is it fun to put a flower pot onto your sunflower character’s head? I don’t know why, I just know it is. 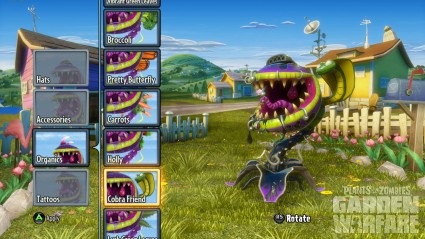 Give your plants some piercings? Sure, why not?

Again, another tried and tested mechanic of the class-based shooter is class-specific challenges and coins. Completing challenges allows you to unlock the abilities for each class, though the first round of abilities are unlocked really quickly. This means you won’t come across any super-charged opponents that have powers you’ve never seen before. In fact, after unlocking each class’ three initial powers, future unlocks are more like variants on what you’ve already got. This may disappoint those looking for an upper-hand in combat, but to my mind it keeps a level playing field for all.

Coins are used to buy sticker packs. These sticker packs will contain cards that dictate just what plants and zombies you can call upon to protect you as previously mentioned, but they’ll also contain items as well. If you’re a completionist, Garden Warfare may well be your undoing. There are hundreds of stickers to collect and to complete the entire sticker book, bearing in mind more content keeps on being added, could prove quite the challenge. 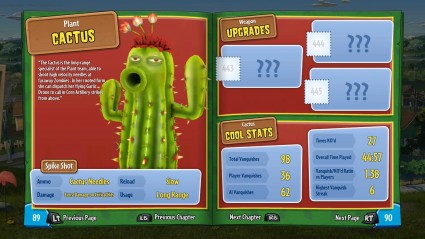 Not your average horti-f$%king-culturist…
For those looking for a less intensive online experience, this is a great choice. It’s fast and frantic without being harsh or confusing. No instant spawn kills will please those that aren’t ‘hardcore’ FPS players and there are a varied selection of class types and maps to keep you going for a long, long time.

I’d recommended PvZ: Garden Warfare to those that don’t normally play this type of game, but even those that normally spend hours in Battlefield or Call of Duty will find a multiplayer shooter that’s a little less challenging, but still a ton of fun. The final thing to mention is that the game’s being offered at a near ‘budget’ price. Hard to argue with really. Well worth a shot.