Though Pokémon is a craze that managed to pass me by completely over the years, it’s impossible to be unaware of its big reputation. I only popped my pocket monster cherry with Pokémon Black not more than two years ago and I found a quaint, if simplistic JRPG. It was definitely a lot of fun, but I found it slow-going and the collection aspect, the system around which the game centres, failed to keep me motivated to see it through to the end. Funnily enough, however, I think a younger me would have been obsessively into this franchise, but I just wasn’t feeling it with my first go as a jaded 29-year-old.

Well, Pokémon X & Y are here for the core series’ first outing on 3DS, and with its various subtle and not-so-subtle upgrades, they’ve made a game that this 32-year-old can now fully get behind…

From a purely mechanical perspective, Pokémon is still all about collecting and battling as you seek to become a champion trainer. As is typical of the series, on the whim of a mad scientist you’re sent away from your home to travel the region, in this case Kalos, to fill out your Pokédex and earn eight badges from the gym leaders of neighbouring towns. Of course, along the way you find there’s someone up to no good, and in X & Y it’s the money-driven Team Flare who are out to stop you at every turn. While it treads familiar ground, it’s not to a detriment, and for veteran players there is a lot of new stuff to take in.

For example, this is Pokémon at its most gorgeous, representing the biggest graphical overhaul the series has seen since, well, ever. Gone are the ageing and washed-out 2D sprites and in are beautifully rich, bold colours and the cutest 3D character models you’ve ever seen. The over-world is vibrant, and battles now actually look like battles with animations and a dynamic camera adding much more style to confrontations. For the first time ever, you can stamp your own authority on your virtual avatar, as not only can you choose your skin-tone and general appearance (albeit from just three looks per gender), money earned from fights can be spent on new clothes and accessories, which is a nice little addition. 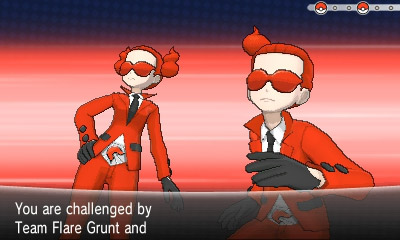 The garish Team Flare are the pain in your butt in X & Y.

The improvements come in more areas than the superficial, but in some cases you’d be hard-pressed to notice. Game Freak have sought to fix some of the clunkiness that the series has been known for and some of those changes are so subtle you might not even notice them at first (such as the fact that you can run around the world diagonally now! Yippee!). Each adjustment makes for a far more enjoyable and fluid experience than I had previously encountered with this series.

The roller skates, which you get far earlier in this iteration, are a great example of just one area that has been hugely improved. Formerly, the only way to equip and unequip them as needed was to pause and go a few menus deep, whereas now the thumbstick sees you move using your skates and the d-pad makes you walk. A change like this sounds so minor, but it speeds up game time considerably. Another brilliant feature is the EXP Share that allows you to level up your entire six-creature party at once. You get this surprisingly early on, and it’s a vast improvement over the single item that allowed you to level one other Pokémon concurrently as in Pokémon Black.

That’s not to say that there isn’t still some general clumsiness to be found, especially surrounding the menus. For example, when using a PC in the game there’s a brilliant new option called Organise Boxes, which allows you to freely drag Pokémon between your party and your storage boxes. Brilliant! However, the separate menus for Deposit and Withdraw Pokémon still both exist and are more prominently placed in the menu, and I can’t fathom for one minute why when there’s now a better option.

Still, the changes made are all positive and mean that your adventure gets off to a quicker start, and the experience is much better for it. In X & Y you’re fiddling around less in boring menus and doing more of the fun stuff, such as the battles.

The excellent turn-based battles will offer less surprises, still focused heavily on elemental combat (fire, water, grass etc), but they’re great fun whether you’re pitting your party against other trainers, gym leaders or just for the purposes of weakening and capturing creatures. Usually you’re looking at an entirely new set of Pokémon for each new iteration, but here Game Freak are celebrating older Pokémon as well as the new. As someone with limited experience with the series, I found it to be almost educational to discover the likes of Pikachu or Bulbasaur; Pokémon I’ve heard so much of from others but knew so little about. It was like a fast-track lesson that helped to plug a particular hole of my childhood, and I loved every second of capturing the different species this time around. 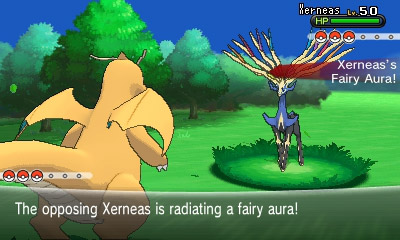 The fully 3D battle engine makes a huge difference to the series.

Of course, Pokémon are well known for their three levels of evolution, triggered when they hit certain levels or conditions, and in X & Y it’s no different. However, there is a fourth, temporary Mega Evolution, but it is only available once per battle and accessible only with Pokémon with which you have a strong bond. Actioned via the touchscreen and combined with an attack, your chosen creature will take on a new, more powerful form, which is a great tide-turner in the middle of a difficult fight.

Once you’ve got a number of Pokémon in your party, there are new features available that allow you to interact with them. Using Pokémon-Amie, for example, you can pet, feed and play fun mini-games with them to strengthen your bonds. Super Training allows you to boost their base stats using mini-games that focus on boosting your attack, defence and HP, among others. Here you will also unlock Punch Bags that can further help raise power with just a few taps of the screen. Neither option is particularly essential, but they’re definitely beneficial if you give them the time.

What really set this version apart from previous games are its social features. You can now trade, battle and follow the progress of any other player around the world as long as you’re near a Wi-Fi connection. Great features like the excellent Wonder Trade, which allows you to nominate a creature you no longer want and trade anonymously with no actual interaction required, shows that Game Freak have attempted to account for every type of player. Of course, the downside with that particular system is that you never know what you’re going to get in return, but it’s a great way to get rid of the creatures you no longer want. Pokémon games have always been regarded as a social experience locally, but here Game Freak have made a great fist of putting it online.

Catch ‘em all?
Though it doesn’t exactly reinvent the series’ core themes or formulas, even the most minor of changes make a significant impact on the 15-year-old Pokémon experience. It’s now perfectly paced, much less clumsy to navigate, and its social features help bring its famously friendly community together with seamless online integration. It’s all underpinned by its trademark rhythm of battling and collecting, which remains as addictive as it’s always been.

With Pokémon X and Y, Game Freak have taken this series that once I could happily take or leave, and made it a must-play portable experience.