Go back a decade and, while you would still find the FIFA series a huge money spinner for EA, it was another that captured the hearts of game-playing football fans. Konami’s Pro Evolution Soccer may have lacked the glitz and glamour of its bigger-budget rival, but through its design philosophy of gentle refinement year-on-year, it always delivered where it counted. PES regularly provided the most realistic game of football, with a pace and flow that FIFA development teams could only dream of.

Of course, during that last decade, things have gone topsy-turvy; FIFA has consistently been the better game, and PES has struggled to find its form, floundering between painfully average and downright ruddy awful. In a way, it’s been like watching my beloved Liverpool.

Still, after spending plenty of time with Pro Evolution Soccer 2015, it seems that someone at Konami or PES Productions has finally remembered what made the series a favourite all those years ago. After making the brave decision to skip the new-generation for the first year, this entry represents an amazing return to form.

So impressive is this return to form, in fact, that within minutes it’s apparent that PES 2015 trumps FIFA in the most important area; gameplay. In fact, I’m just going to outright say that in pure footballing terms, PES 2015 is a much better game than the very good FIFA 15.

Sure, FIFA’s eye for detail and its match-day authenticity are great and it’s the best it has ever been, but when talking about being in control of the players on the pitch, there’s only one clear winner. PES 2015 provides an unrivalled realism thanks to how it encourages build-up play and the use of player movement to your advantage. If you’re in the habit of simply getting the ball to your speediest player and running at defences hoping to get a shot off, then you’re going to have a bad time. Thankfully, the ball moves around beautifully, allowing you to pump it around the pitch confidently as you look to pull defenders out of position or find defensive weaknesses to exploit.

Aiding with fluidity are PES 2015’s superb player animations, with virtual footballers moving with a realistic verve that helps immeasurably with the flow of the game. They are extremely well characterised to their real-life counterparts too; I’m nearly always able to tell which player is on the ball without reading their name, simply because their posture or running style. That said, PES has always done that well.

What it hasn’t always done well is the intelligence of those around you. Your players more than ever have footballing brains that cleverly react to your actions; risk a mazy run with a defender or midfielder and someone further up the field will automatically slot in to fill the gap. Likewise, if your opponents smell weakness, they will target it until you make the necessary adjustments to deal with it. 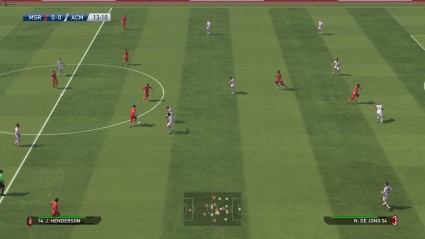 I was going to use official screenies, but they were all Manchester United, and that just wouldn’t do.

It all results in this wonderfully organic sense of momentum that FIFA simply lacks. You could be struggling for possession, playing a bitty, scrappy game under pressure, but then a single moment – be it a successful, crunching tackle or a shot just wide – could spark your team into action. Likewise, you could be cruising at 2-0 before making a silly defensive error or misplaced pass and then spend the rest of the game desperately defending, maybe even drawing or losing when you were odds on to win. Like real football, PES is an unpredictable beast; shock defeats and draws are not uncommon, and not once have I felt like the match was won until the final whistle. This is brilliant. This is how football really is.

Just like real football, goals can come from anywhere. The ball’s weighting is pitch-perfect, so taking a punt at goal feels natural and responsive, and it helps when it has this great habit of sitting up nicely, enticing you to hit it first time with rasping or dipping shots. Equally, I always feel comfortable in trying the audacious from unlikely angles; when it works, I feel like a footballing genius, when it doesn’t, I never regret trying. More importantly, it’s been never anything but thrilling when I’ve found space to unleash a shot; PES 2015 absolutely recaptures the ‘ooh’ and ‘aaah’ moments of its former glories.

Unfortunately, the things to complain about are the same things I was complaining about over a decade ago. For example, while plenty of the leagues are fully licensed, the Premier League is not among them, meaning that I still have to settle for playing as ‘Merseyside Red’ instead of my dear Liverpool. Weirdly, Manchester United (*spits*) are fully licensed, and it’s certainly jarring when coming up against them in one of the league/management modes; I think I’d prefer an all-or-nothing approach with this. The knock-on effect of this is that while PES generally looks bloody stunning, especially in terms of player likenesses, the overall effect can be undone by cheap and nasty fake kits.

Despite lacking FIFA’s sheer attention to detail, though, PES 2015’s match day atmosphere is nothing to sniff at. Crowds have been the biggest step up this generation for sports games and it’s no different here, with less repeated models and more unique animations lending a much-needed realism to packed stadiums; it looks fantastic. Not only that, little details around the ground are brilliant, such as players lining up in the tunnel, stewards and cameras, not to mention groundskeepers tending to the pitch at half-time. It’s authentic in every sense.

The commentary duo of Jon Champion and Jim Beglin do a fine job behind the microphones and, while it’s been a few years since I’ve played PES, they do a much better job of staying on-point compared to previous iterations. A touch of my positivity here could just be down to FIFA’s commentary becoming incredibly repetitive over time, and PES 2015’s just seems fresher due to my time away from the series.

There is a wealth of modes to keep you occupied, with many league and cup competitions to enjoy, including a fully licensed Champions League, but the single-player staple of PES has always been the Master League.

Essentially the manager mode, Master League lets you take control of any club and lead them to glory by signing talent, managing players and winning matches. It’s as deep and engrossing as ever, however some unrealistic moments can take the shine off the experience.

In my pre-season managing Liverpool Merseyside Red, for example, Real Madrid offered me £6 million for an ageing Kolo Toure, who in real-life will likely end up as a free transfer to a team that’s certainly not of that calibre. It’s a little jarring when it’s the type of mode football fans will rightly want to lose themselves in.

The other big mode this year is ‘myClub’, which is essentially PES Production’s take on Ultimate Team, seeing you burdened with a random selection of nobodies before slowly trading up to the team of your dreams. Rather than buying sticker packs, here you buy random players (and managers) through different tiers of agents, spending ‘GP’ earned by playing matches online and off. There’s definitely an addictive quality here, and I found much enjoyment in testing my ever-changing line-up against others online. 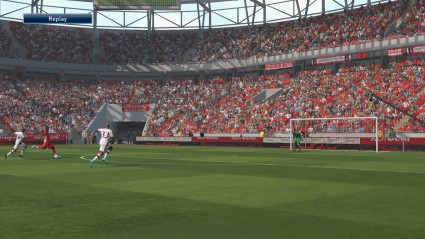 Instead here’s Merseyside Red in all their glory!

Thankfully, in this regard, PES 2015 has a solid online component to back it up. As well as neatly tying in online features to the likes of myClub, it also has the expected mix of friendlies and online cup competitions; however, my favourite mode turned out to be ‘Online Divisions’. Technically it’s nothing special, but with its simple ranking system similar to that of FIFA’s ‘Seasons’, it provides a sense of purpose to playing endless one-off matches.

As is usual in the case of sports games, I did occasionally find the odd patch of button lag, but otherwise the net code is remarkably stable. I did also have one peculiar case where I was drawing against someone in a cup game and they missed a late, guilt-edge chance to win it before obviously quitting, and in the aftermath it was I that was punished, given an automatic 3-0 loss for the disconnection. Odd.

Honestly, I feel like it’s 2004 again as I sit here explaining that while FIFA is very good and has superior presentation, it’s Pro Evolution Soccer that plays the best game of football. In many ways that’s fitting; PES 2015 does indeed feel like a real love letter to PES4.

By putting the focus back on tight, responsive controls and recapturing the realistic and hypnotising rhythm and flow from its glory days, PES 2015 is easily one of the best representations of the beautiful game I’ve ever played. It plays so well, in fact, that the lingering nags of missing licenses and occasional unrealistic moments in the Master League have done nothing to derail my enjoyment, and are forgotten the moment the opening whistle blows.