This is fine because some games have more of a narrative to them. They don’t ask you to ‘get good’ at them and they don’t show you a ‘Game Over’ screen. Instead they aim to leave you feeling something, give you an experience you won’t forget or introduce you to remarkable characters. Qora, sadly, won’t give you any of that. It’s a game you hardly play and an experience that offers little to remember.The things that initially interested me in giving Qora a run-through were quite simply how good it looked and sounded. The visuals offer an extremely simple, low-res world to stroll through, which uses a bright colour palette to encourage you to jump in. Through your time with the game, you’ll see a good range of locations, from deserts, mountain-tops and dank caves. It’s certainly an interesting world to look at.

The ambient music also helps set the mood extremely effectively. The soundtrack’s very understated and really helps to set the mood, leaving you all set to enjoy an exciting story, engaging characters or maybe some unique levels to explore.

Except none of that happens.

As interesting as this looks, don’t be fooled.

Instead Qora plays out as follows: You start off in a rather tame part of the world, with you moving into a new village. You potter about, meeting your new neighbours whilst the builders finish off your abode and soon stumble into an ancient temple and end up with a power which allows you to see a ‘ghost world’. Another power you seem to gain is the ability to see and hear a ghost who commands you to follow them on a journey.

The ‘ghost world’ ability offers you glimpses into an ancient past and sparked my imagination. While wandering through a bland desert, you use your vision to see you’re actually on the remains of what was once a seabed brimming with life. You’ll be trudging through a swamp and you’ll be able to see that it was in fact the setting for a grand party many moons ago.

This could have been a setup for a great mechanic where you switch between two worlds, and changes in one affects the other.

Your ghostly sherpa could have taken you to fantastical lands that required you to interact with all manner of strange beast, solve puzzles or uncover a ghastly truth. 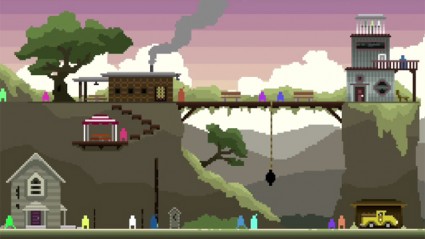 Both the powers and the journey itself go nowhere. You see, your ‘ghost vision’ can only be activated at prescribed points. Whilst you’re peering into the afterlife, you’re not allowed to move either. Meaning each peek at the beyond is nothing more that a slightly animated cut-scene.

The journey, and the story that comes with it, are in no way engaging. Screens that you navigate through will, at best, ask you to press space bar to hack at some tall grass so you may continue. Sometimes you’ll be asked to press the spacebar to hack at a rock or maybe, if you’re really lucky, you’ll press the spacebar to jump. Either way, it’s beyond linear and it’s far removed from engaging.

Fair enough that this is a game that doesn’t want to be ‘played’, as such, but what Qora is trying to be is an interactive piece of narrative. A sequence of events where you control the main character. So for Qora to have a story that’s instantly forgettable, entirely unrelatable and sometimes downright nonsensical is its biggest fault.

The tale lurches from trying to be funny to trying to be meaningful. Throw in a bit of ‘LOL – randomz’ and you’re left with a mess. The initial story of an ancient princess who’s greedy and mean to her people gets interrupted by talking to a villager whose girlfriend is a gorilla. Did that last sentence make sense to you?

You might get to press ‘up’ to climb the stairs. Exciting!

You’ll meet a strange traveller who seems to be the antithesis of yourself. Your character’s made of white sprites, the traveler’s made from black. You want to follow the ghost and explore whilst the traveller wants to stop moving around. A traveller who wants to stop travelling and a person who’s just settled down wants to go on a journey. Polar opposites. What does it mean?

It means nothing, because you’ll soon be talking to ghosts who buy bad presents, meet a French Bulldog wearing a crown and awake a giant sleeping parrot who makes a glib remark before slowly dissolving.

By the end, I had no idea what Qora wanted to be. Was it trying to be funny? I didn’t laugh once. Was it trying to be serious? A dog wearing a crown will damage that intention. I ultimately finished the game feeling confused and annoyed that such a great art direction and soundtrack wasn’t put to better use. The best thing about Qora is its trailer. Which is available right here.

Watch that and save yourself some time. Sadly, this is an experience to avoid.