We’ve all had moments when playing a game where a plan comes together. There’s nothing more satisfying that setting up a trap or carrying out an attack that works flawlessly. This feeling of accomplishment is only multiplied when carried out in a team setting and you get to see everyone doing their bit to complete one goal.

Rainbow Six Siege tries to evoke what Left 4 Dead and, to a certain extent, Payday has done before: Give you a tough task and a team, and force you to work together. Sadly, Rainbow Six Siege is totally unforgiving, meaning the moments where your plans work are amazing, and the more common moments where they don’t are a real buzz kill.Rainbow Six Siege is Ubisoft’s attempt at turning their shooter into something a little more cerebral and tactical. The idea is that a group of five of the world’s best Special Forces operatives are going up against five of the world’s best, yet evil Special Forces operatives.

Although, maybe the people taking hostages and planting bombs aren’t evil? It’s never really made clear as Siege does its hardest to avoid any sort of commentary on the carnage you’re involved in. As it is, you’ll take it in turns playing as an attacker, trying to rescue the hostage or diffuse the bombs and then you’ll switch to defender, trying to keep hold of the hostage and stop the bombs being diffused. 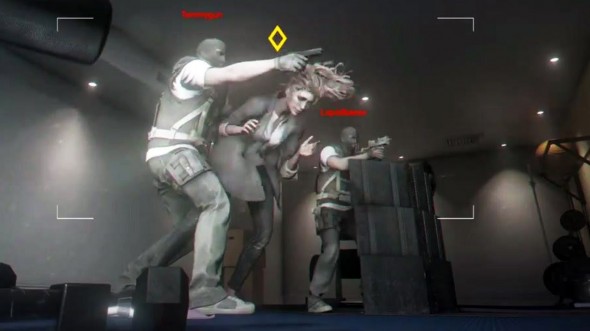 Step 1, find hostage. Step 2, go in with guns blazing and hope for the best.

Now you know what you need to do in the round, it’s time to do some basic planning. If you’re defending, you and your team-mates will need to barricade yourselves in, plant some traps and be aware of where the enemy is likely to come in from. If you’re attacking you do something slightly different – you start by controlling a remote-controlled drone that you use to search the map for your target and the enemy. This planning phase is pretty vital as the rounds are quite short at three minutes long, so any time wasted looking for the enemy is a real problem or a real boost to your chances of success, depending on which team you’re on.

Speaking of teams, it’s time to mention the Special Forces members that you play as. The Special Forces involved come from all over the world, so you’ll have the SAS teaming up with the FBI and so forth. Picking a character from the roster isn’t just a cosmetic decision as each forces member has their own unique set of skills and can only attack or defend. These character’s abilities should, in theory, work well when utilised together. For example, an FBI agent called Ash can fire a charge that blows holes into walls and this would work well in conjunction with another character that can use an electronic scanner to help pinpoint an enemy’s whereabouts. 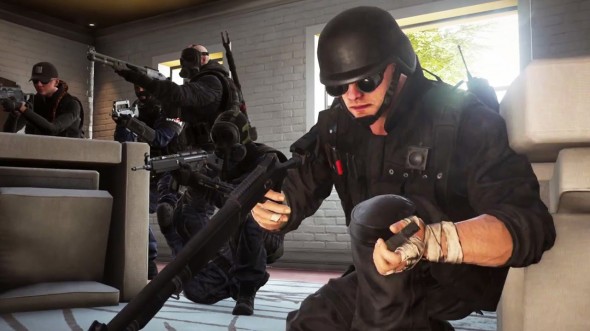 This guy is in charge of planting mines, so don’t have him look after any hostages.

When, or if, you do die, you can still be of some use to your team. As there’s no re-spawning, you don’t sit and watch a timer count down to 0, instead you can cycle through the in-game CCTV system and tag enemies to help your team out.

It’s a pretty fantastic set-up, with matches being incredibly tense affairs where, even if the odds seem against you, a team can still win with a well timed explosion, breaching of a wall or popping off a couple of headshots. 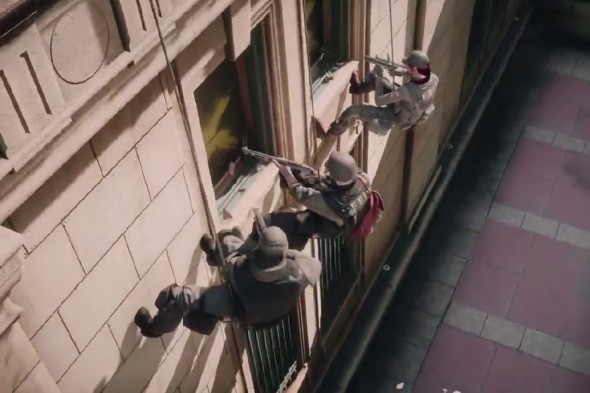 This looks like it’s about to go well – it won’t.

All of this, so far, is a best case scenario. When everything’s working, when you’ve got a full team talking to each other and when you’ve got team-mates that know what they’re doing, Rainbow Six Siege is brilliant.

However, this isn’t always the case and nothing shows this issue better than the second round I ever played of this game.

3, 2, 1. The round starts. I’m attacking and haven’t played this map before so I don’t know where to look for enemies. My drone aimlessly wanders around dead-ends and my calls for help go unanswered as I’m the only person on the team that is using a headset. The preparation phase ends and I’ve no idea where the enemy is. This doesn’t prove to be an issue as somewhat mercifully my team-mate, three seconds into the round starting proper, shoots me in the back of the head killing me instantly. Friendly fire, it turns out, is always on. I proceed to sit and watch my useless team get slaughtered as they try to first find the opposition and secondly rescue a hostage for the next two minutes. They fail, we lose the round and I quit the game hoping to get lucky on my next spin of the matchmaking wheel. 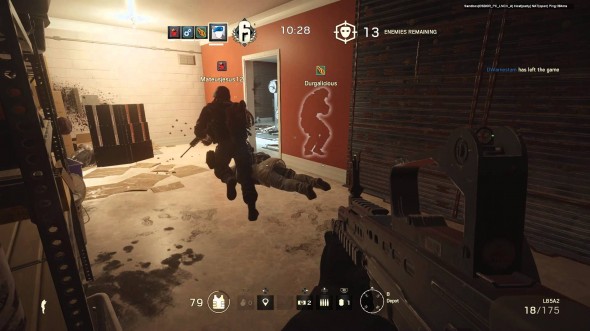 If your own team-mates don’t kill you, someone else will…

In the game’s defence, part of the above frustration was down to my inexperience, I’ll concede that much. What isn’t my fault, however, is the fact that the game’s design relies so heavily on cooperation that as soon as one person steps out of line then everyone’s enjoyment goes down the tubes too. I really can’t stress this enough. If you’re playing with silent partners, if you’ve got someone who’s not paying full attention or if you have a total novice on your team, you might as well quit.

So the Rainbow Six Siege‘s design falls apart when ‘not played properly’, and that’s a shame. What also doesn’t work, no matter how you cut it, is the game’s gross tendency to unlock what little content it has away and to also unfairly reward and incentivise people that purchase in-game boosts.

Like a ton of other releases, Rainbow Six Siege asks you to play the game, earn some coins and unlock stuff. Fair enough. The issue is that there’s really not much on offer. The only things to purchase that truly change how you play the game are operatives, of which there are twenty. Once you’ve purchased all of them, that’s it. The issue is that purchasing all twenty will take a long time as operators become more expensive to unlock as you go. To make this grind a little less of a grind you can buy ‘boosters’. These items will reward you with extra experience points to level up and more coins for completing matches. 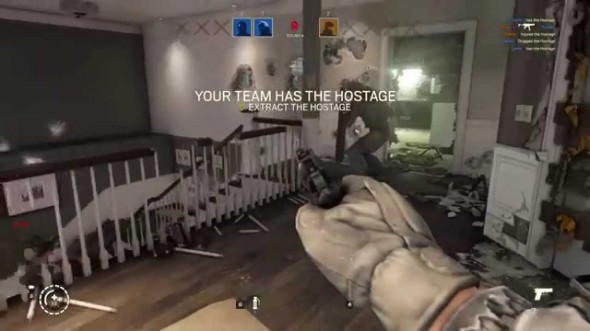 Pro-tip: Hostages without bullets in them will earn you more XP.

The gross part is that boosters can only be paid for with actual money and not earned in game. They’re also time-limited and they are more effective if you’re playing with other people that are also ‘boosting’. This means that occasionally you’ll start playing against teams who are all ‘boosting’, and this means two things:

There are more maps on the way and yes, they’ll be free, but this whole product doesn’t feel like a good value proposition especially if, to play it properly, you’ve got to convince four other friends to also pay full whack for this thing.

It’s a real shame. Rainbow Six Siege does require effort on your part; the effort to play the maps a few times so you’re not going in blind, the effort to find your preferred operatives, and the effort to get a group together. When all of this comes together it’s a really unforgettable game that will provide you with plenty of great moments and satisfaction. Ultimately, I find it asks too much of its players to be able to get the best out of it. I recommend you try it out, but be prepared to put the work in and you’ll have to convince some friends to hand over their cash too.