Memory is a funny thing. It can easily be distorted over time and often betrays us. As a concept, a game about people’s memory and altering someone’s recollection of events could be amazing.

So have Dontnod managed to pull off the amazing? Their debut game, Remember Me, is an action adventure title that plays with the idea of what memory is and how it shapes who we are. Question is, is it a memorable experience or something that’s best forgotten?Knowing me, knowing you

The game puts you in the shoes of Nilin, a ‘Memory Hunter’ who’s part of a resistance that’s out to stop an evil corporation that controls, sells and erases peoples memories. Some people do this willingly, others less so.

At least, that’s what you’re told. The game begins with Nilin about to have her own memory wiped at La Bastille, with the historical French landmark having had some upgrades including some lovely prison cells full of ‘errorists’. You can’t remember anything and you’re about to have the last few pieces of your past wiped from your mind when a voice contacts you through your cyber-implants and helps you escape. 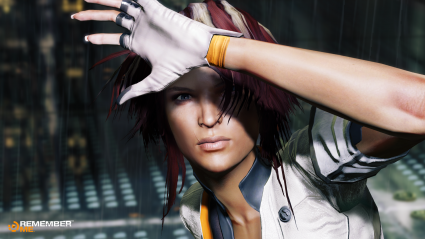 Sunglasses: wiped out in 2032. A bleak future indeed.

It’s a pretty solid story, covering a range of ideas such as forgiveness; what it means to have memories we’d rather forget; two wrongs making a right; and also calls into question blindly following orders (which is something we so often do in games).

It’s not going to rival The Walking Dead or (from what I’ve heard) The Last of Us, but this is a big step-up from your standard video-game storytelling.

What makes it all the more enjoyable and engrossing is the level of detail the team at Dontnod have gone into with everything. I mean everything. The location of Neo-Paris is stunning. Not since Deus Ex or Mass Effect have I wanted to visit the location of a game. I don’t want to be Nilin; I don’t want to save the world. I just want a nice weekend break in Neo-Paris. Is that too much to ask?

Every shop has a busy store front full of believable items and logos; the world is littered with pedestrians, and later on, servant robots, that are ignoring all manner of chaos around them. In the future, adverts and signs respond to your presence and pop up out of nowhere. It’s an incredibly well-realised vision of the future. 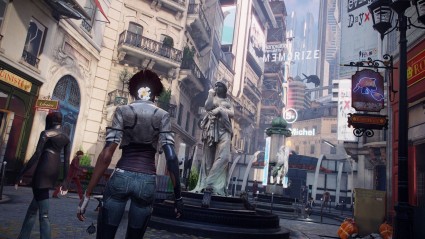 Three days, Friday to Sunday. Only £300! A right bargain.

The game’s writing contains some hilariously contrived slang, though. The previously mentioned ‘errorists’, the way people say ‘remember you later’ instead of goodbye and a character called Bad Request all show a real conviction to the world that made me chuckle a couple of times, but ultimately lands the right side of ridiculous.

The reason I’ve spent such a large chunk of time talking about story and setting is because they’re the game’s strong points. This attention to detail and well-realised depth doesn’t extend to the gameplay of Remember Me and it’s a real shame. 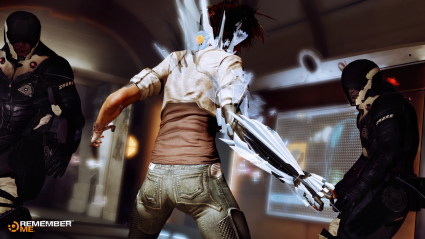 Uh oh. I now have to talk about the fighting…

Forget-me-not
The gameplay is fairly standard in concept. You run, jump, climb and shimmy around the previously mentioned wonderful environments. When enemies appear, you fight them. What should have been an interesting mechanic, the ability to ‘remix’ your combos, turns out to be nothing more than a promise unfulfilled.

The main issue is that you don’t really create new combos at all. There are only four combos throughout the entire game, all revolving around pressing triangle or square at certain points. That’s it: four!

The actual manifestation of ‘remixing’ these four combos is the ability to add a power to each square or triangle pressed in the sequence. You can make punches or kicks give you health, cause extra damage, cool-down a special ability or act as a multiplier. 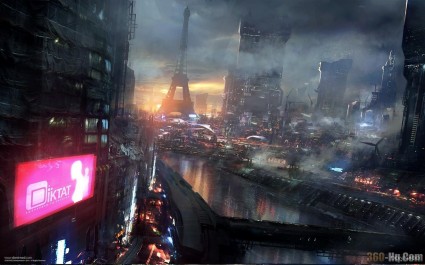 Let’s remember how nice it looks for a second.

It does offer a little strategy as, for example, I used the three-hit combo as my ‘go to’ for health regeneration, whilst the longer eight-hit combo was all about dealing extra damage.

The combat itself is hardly of Arkham City quality though. A fair attempt has been made at giving Nilin some interesting powers, such as invisibility, controlling robotic enemies and a stun blast, but it doesn’t stop the fights being less fluid than required.

Often you’ll hit a different enemy to the one you’d intended to hit; this stops your combo. Too many times you’ll have to dodge an attack and end up away from the person you just punched; this stops your combo. Towards the end of the game, flying robot enemies will pepper you with bullets from the sky; this stops your combo. Despite that, it never gets too challenging or too dull. It just doesn’t give the player a real sense of control of the fight, meaning it becomes a messy slog where you’re repeating the same four combos over and over again.

The other half of the game, the traversal of fantastic environments, is also disappointing. None of the running or jumping is particularly rewarding or challenging. This is mainly down to the fact that large orange arrows appear at regular intervals telling you exactly where to go and with a press of the X button, Nilin goes off and does all sorts of wonderful leaps and bounds. All you had to do was press X. 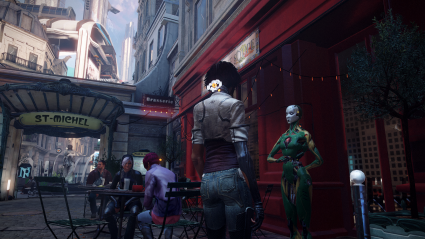 Seriously, stop worrying about how it plays and look how pretty it is.

That’s when it works, as there were some occasions where I pressed X, like I’d done a hundred times before, only for Nilin to fall to her death. Why? What happened? No idea. I won’t even talk about the ‘stealth’ sections where you have to avoid drones that will instantly kill you, because quite frankly, I think you know what I have to say about that.

Did I forget something? You want me to talk about the much hyped ‘memory remixing’ that was shown so heavily to promote the game? OK then: they’re little more than slightly interactive cutscenes of which there are about five throughout the entire game.

It seems odd that they were used so prominently when showing the game initially and, much like a lot in this game, are a great idea that’s poorly executed.

Memory leak
It seems odd that after airing all of the bits I hated about playing Remember Me, I still can’t help but be impressed and positive about it as a whole. Yes, it’s no fun to actually play, but it does so many other things right.

The graphics are great. Not from a technical point of view, but the game’s style and overall presentation is refreshing and superbly realised that you instantly know when you’re looking at a Remember Me screenshot.

Some nice graphical flourishes are used throughout, with Nilin seeing glitches in the real world as her memory chip bugs out when she’s low on health. Entering someone else’s mind is also a suitably ‘glitchy’ affair and this style contains through to the game’s audio.

Listen to me
Songs will seemingly ‘skip’ and sound corrupted, but it’s all part of the act. It’s hard to nail down exactly what the music of Remember Me is doing but to me it sounds like orchestral music that’s been digitised and has lost a few 0’s and 1’s along the way. It’s really quite fantastic.

Jog your memory
There’s not much else to say about Remember Me. It’s a great looking game which oozes style and has a real heart to the world it’s created and the story it’s telling. The game itself, when you’re actually playing it, is at best quite enjoyable and at worst dull.

There’s no multiplayer and as yet no DLC for the title meaning that the game’s 8-9 hour campaign is all there is. So, ultimately, what do I think?

I strongly recommend you try it though. Really strongly. If you fall in love with Neo-Paris as much as I did then  you’ll have a title that you’ll remember for a long time. It’s just that the the game itself (the bit you actually play) is pretty forgettable.