It’s fair to say that Resident Evil has had an image crisis over the last decade. Having been removed from its survival horror roots, Resident Evil games have gone from light-gun games, to online shooters, to all-out action games. All achieving varying degrees of success, these games have made it hard to say what a Resident Evil game is or what the series even stands for any more.

Then along came Revelations. Returning to traditional Resident Evil values of tight corridors, limited ammo and shambling creatures, the handheld title found a lot of love (though I wasn’t keen on the PS3 version). So that’s why we’re here with Resident Evil: Revelations 2. Does that mean we’re dealing with a game that has some real bite, or has the series finally lost all of its teeth?The first thing to note is that the game is episodic. For some reason Capcom decided to drip-feed the four main episodes of this game over four weeks. This emulates the structure of the first Revelations game but with the added and unnecessary feature of ‘waiting a week’. Very odd indeed. Adding to the bizarre structure of the game’s release is the fact you can buy a season pass for the episodes or wait for the physical release. The season pass gives you access to 2 bonus episodes as does the physical disc. On top of this there’s a ton of costumes you can buy and other in-app purchases you can make.

All of the main episodes are out now (with 2 ‘extra’ episodes coming soon) so it’s as good a time as any to release a review. Updates to this review will be fortnightly, with extra paragraphs being launched on alternate Thursdays. A special video review will be available for season pass holders whilst lifetime subscribers will instead have exclusive access to the ‘making of’ documentary which chronicles this review’s journey. I kid.

The game takes place on an island which is clearly of Eastern European origin and has fallen on hard times. These hard times consist of monsters, mining facilities and megalomaniacs looking to spread viruses about the place.

Finer points to the ultimately throwaway story include the fact the cast has two big names of Resident Evil canon returning. Claire Redfield and Barry Burton are the main stars, but as the game has a co-op focus both Claire and Barry have partners. Moira Burton is Barry’s daughter and she accompanies Claire whilst a little girl by the name of Natalia helps out Barry. 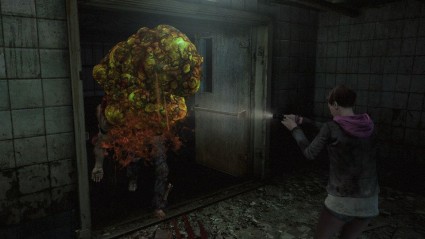 You’ll need more than a torch.

You’re given a setup that tries to make you care about the newly introduced Moira and Natalia, but I ultimately couldn’t get into the tale. It’s too similar to what’s been seen before, the heavy-handed Kafka references grate rather than impress and the game’s decision to have an arbitrary ‘good’ and ‘bad’ ending did not make me want to replay to see what I’d missed. Still, Resident Evil is hardly known for its amazing story-telling, so let’s not get too hung up on the fact this isn’t winning any awards for narrative.

The way it plays is fairly standard fare by recent Resident Evil standards. Barry and Claire do all of the shooting whilst the secondary characters can do nothing more than find hidden items, shine a torch light which stuns enemies or use a supernatural power to sense nearby enemies. Combat sees you firing at a zombie’s limbs, causing them to stumble, which leaves them open to melee finishers or allows you to retreat a little. The issues I had with Resident Evil 6, where zombies barely flinched at bullets and headshots were punished by having large scythes grow out of bullet-riddled craniums, are gone.

You may think that having only one character that can fire guns would make Moira and Natalia not much use, but you’d be wrong. Switching between characters is required at certain points of the game but you’ll find yourself switching of your own free will as their abilities are actually pretty useful. Natalia’s ‘zombie-sense’ can help you creep around undetected and Moira’s flashlight shines so bright it can stop enemies in their tracks. Both characters are also useful in that they can find hidden items, the most common being ammo. 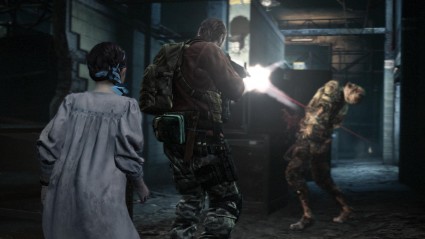 “It’s cool Natalia, I got this. You just point at things.”

This is absolutely crucial because ammo can be a real problem at certain points in the game, and this brings another issue to light. Resident Evil: Revelations 2 doesn’t know what it wants to be. The game isn’t scary because there’s wave after wave of enemy to fight. The game isn’t an all-out action title as large battles are interrupted with the need to scrounge together some more bullets. This leaves the game in a weird limbo as it’s neither one nor the other.

Aside from killing things there’s also the need to solve some simple puzzles and make your way from area to area. It’s all fairly straightforward, as most puzzles boil down to finding a key or pushing a button. On top of this most areas are signposted heavily thanks to a mini-map appearing in the top right of the screen. This helps to keep you moving forward, but when the game’s as straightforward as it is, you start to feel like you’re being funnelled through a series of corridors at an all too brisk pace.

Another feature of the pace and structure that stuck out was the episodic nature of it. I’m not talking about how each chapter was ‘sold’ week-by-week but the fact that each main episode has you play as Claire and Moira and then has you play as Barry and Natalia. This means that each (roughly) two-hour-long episode gets cut into two one-hour-long chunks. The problem arises where the game asks you to retread the ground you’ve just gone through. Claire’s sections happen and then Barry’s part of the game, happening six months later, asks you to often go through areas you’ve just gone through. Resident Evil has a history of asking you to re-play sections or to play through areas as multiple characters, but when you’ve literally just played through an area 30 minutes ago, it really sticks out when you’re asked to revisit it so soon. 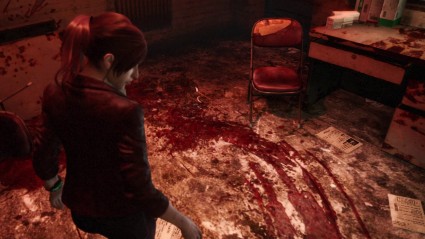 A strong sense of déjà vu.

It’s not all bad though. There’s a hidden strength and it’s in the new Raid mode. Unlike the main part of the game, Raid mode knows exactly what it is – a series of missions that ask you to clear out maps full of enemies that come at you wave after wave. The maps have a healthy smattering of ammo, unlike the main campaign, and if you ever run out of bullets it’s probably down to the fact you fired too many into a concrete wall.

After each mission you earn experience points which level you up, and you can also unlock new weapons or parts for your weapons. It pays to keep replaying these missions so you can unlock more skills as you get to the higher levels, it pays because you never know what loot you’ll pick up, and it pays because you need to do a perfect run to unlock all of the medals which will give you an experience boost.

It’s really odd to say that this mode, with its daily challenges, large roster of characters to play as and its somewhat off-putting micro-transaction filled menus is Revelations 2’s strongest aspect. But it is. It really is. 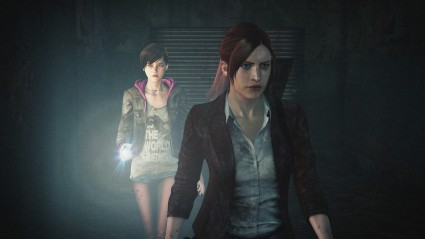 In the end, Resident Evil: Revelations 2 is an odd creature. The main story of the game straddles a line between survival horror and action game, but never quite settles on where to call home. The story brings back old characters but does nothing interesting with them, instead relying on old tropes that previous Resident Evil games have long established.

Everything plays fine and Raid mode is actually rather good, but if you’re not a Resident Evil fan you’re not going to be amazed by what’s on offer here – and you’re certainly not going to laugh at Barry’s callbacks to ‘Jill sandwiches’ and being the ‘master of lockpicking’. Resident Evil: Revelations 2 should please fans of the series but feels like an attempt to tread water rather than push forward.