I very nearly didn’t bother with Alan Wake, instead having my eyes on another prize, though after spending the entirety of the release day constantly changing my mind back and forth, I ended up picking it up the day after. I didn’t regret my decision to buy it one bit in the end, finding a well-polished and atmospheric thriller. Alan Wake, like Max Payne before it, is an example of Remedy’s fantastic ability at balancing thrilling and compelling narrative with solid gameplay. These were also thoughts echoed by my colleague Ray in his review.

It was publicised before Alan Wake’s release that DLC featured heavily in Remedy’s plans, and it left me wondering just how they’d be able to fit it in without unravelling something of a brilliantly written ending. So, with The Signal released for free to people who bought the game brand new (560MP for everyone else), I was able to find out for myself.

Note: If you haven’t finished Alan Wake, I implore you that you don’t read on or sample the DLC until you have.

The first part of Wake’s episodic continuation begins exactly where you left off in the full game. Alan himself tells you that he was able to save his bizarrely wooden looking wife by writing a better ending for the book that has caused him so much trouble, at the expense of leaving him in what he only knows as ‘The Dark Place’, eternally writing the events currently about to unfold around him. You pick up as he writes himself back at the beginning of his story, outside the diner where he originally went to pick up the keys for the ill-fated cabin stay at Divers Isle. As he enters, you are greeted by the exact same scene to be found at the beginning of the full game, only this time the customers and staff are ghostly apparitions. The dialogue, the occurrences are all the same as the first time you experienced this, only whenever someone mentions Alan’s name, the sound distorts.

Alan knows he has been here before, but doesn’t fully realise why. He also knows that he must head to the restroom as he did previously, but this time he isn’t confronted by the Dark Presence masquerading as a frail old lady. As you delve further into the men’s room, the mirror suddenly lights up like a television (TV’s play a big part once again), and the voice of Thomas Zane advises you that you must find a better point of contact by following a signal. Alan is shown footage of himself crazily narrating, before Zane provides him with his trusty flashlight and revolver. It is here where The Signal starts proper, with a clueless Wake wondering just what the hell is happening. Get used to reliving certain areas and scenarios from the main game in this way, as you’ll encounter a number of familiar places and faces throughout the episode. Rather than being repetitive, it’s unnerving as you should know the areas, but anything could happen. It’s done with a fresh take, and at times you’ll be looking in on situations and conversations from another perspective. 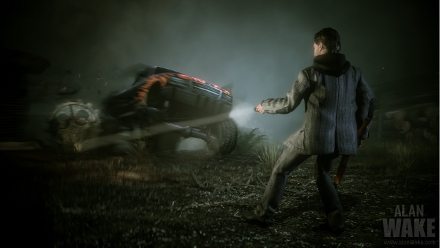 The torchlight is mightier than the car...

The first thing to mention here is that nothing has really changed in terms of the aesthetics or the core gameplay mechanics that you’ve experienced from the main game. The game still looks absolutely gorgeous, with fantastic atmosphere, but there are no real new gameplay features to be experimenting with, although this episode does heavily revolve around an element of the main game that came into play towards the end. When attacked, you’ll still be sapping the enemies guard with your light before taking them down with whatever weapon you happen to be using at the time, and it’s a fun mechanic that sits between the control systems of Silent Hill and Resident Evil’s 4-5. Possessed items make a comeback, as do the evil birds that are a pain in the arse to dodge, and in one instance they appear with a clever twist that I won’t spoil for you now. Alongside the narrative, you have your usual collection objectives too (clocks instead of manuscripts this time), giving you just enough reason to venture off the beaten path and explore a little. None of it is truly ground shaking though (although there is literally some ground shaking in the episode), but the gameplay is just as fun as it was the first time around and provides a decent follow on from the main game. I would love to have seen it take more of a puzzle orientated route at times, as used to be the case with survival horror games of its type before they went all action orientated in recent years.

While the narrative, as before, is absolutely top notch and easily my favourite thing about the Alan Wake experience, in The Signal, it brings me to a crossroads. Upon completing the main game, I was very quick to applaud Remedy for putting together a story that didn’t hold the players hand and seemed to purposely leave you with an unhappy ending that was up to the gamer’s interpretation. I loved it as an example of mature storytelling and I truly wish that there were more developers that would take this kind of risk in direction. To my pleasure I found threads on forums with people swapping theories as to what had happened in the ending; this is exactly the sort of thing we should be seeing more of as the industry continues to grow. Honestly? If I’d have had my choice, I would have killed the game as a franchise right there and then.

This DLC on the other hand, not only hints that Remedy are keen to remove that ambiguity in future episodes, but it also leaves you with a feeling that you didn’t exactly get a finished product the first time around. In my opinion, when looking at this as optional content, which is what it is, it’s wrong to continue the story in this way. I’ve gone from feeling completely satisfied with my original purchase to feeling like the developers have actually done half a job and are going to be charging me extra for completing it. It’s like selling us half of the movie Memento at full price, pausing it at a convenient place and then expecting us to pay for the right to see the way it really should have ended. The sad fact is, despite that, it’s very enjoyable and it’s put me in a position in which I must see what happens next, and in that respect it has achieved its goal. 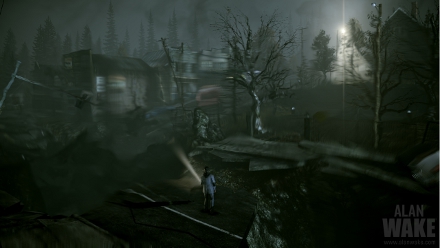 For people just wanting more Alan Wake, this DLC is technically just as high in quality as the full title in both gameplay terms and outstanding writing. If you liked the full game, chances are you will enjoy playing this too, but be warned; it is quite a short effort and you’ll probably have it finished within a night’s play. That said, at a fairly reasonable price compared to other DLC of its ilk, it’s hard to argue too much. My advice would be to download this for free if you can, or buy it as a one off to see if continuing the story is something you want to do.

Remedy, as a huge fan of the work you have done with this IP, you have now ensured that I’ll be investing in the continued adventures of Alan Wake. I just don’t like the way you achieved that.