There are plenty retro games from my youth that I’d love to see remade, re-imagined or turned into a series. A next gen Streets of Rage or Starwing, maybe a fully 3D Theme Hospital or a Golden Axe that doesn’t suck ass. One that certainly wasn’t on my list however was Bionic Commando (it was slightly before my time), but the story of a soldier with an extendable grappling hook for an arm seems like a perfectly reasonable candidate, and some of the marketing footage looked very promising.

I thought I’d check it out, and after a few clicks on a well known DVD rental website I was swinging like it’s 1988, so is Bionic Commando a welcome dose of nostalgia? Or should it have stayed back on the NES where it belongs?

Man’s real best friend? A massive biomechanical arm
Bionic Commando, developed by GRIN and published by Capcom, is the sequel to the NES game of the same name which was released back in 1988. The changes in gaming over the last 20 years are pretty apparent between these two games. The protagonist, bio-mechanically modified Nathan Spencer, has undergone a pretty dramatic makeover thanks to serving five years in prison for failing an assassination mission. Where the original saw you trying to thwart the baddies in their efforts to resurrect Hitler (seriously), Bionic Commando drops a bitter and ruthless Nathan behind enemy lines after a terrorist attack has already destroyed most of Ascension City.

The storyline has some surprisingly adult undertones, even if the dialogue doesn’t always keep up. There some commentary on the horrors of war as well as social prejudices, as Bionic Commandos are largely reviled and distrusted, even though they continue to fight for their country after losing limbs in battles. The terrorist group themselves are Bionic Commando sympathisers, but these themes are usually spoiled by the fact that Spencer himself is… well, a bit of a cock to be honest, and doesn’t have many redeeming qualities. You can’t receive any orders from Super Joe (again, seriously) without Nathan replying with a textbook raging against the machine rant, and most of the time these pieces of dialogue fall flat on their face. 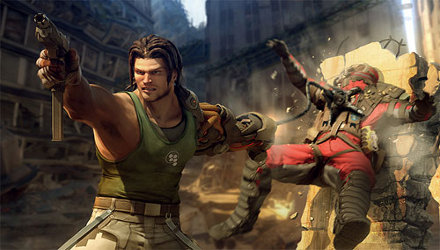 That being said, there are a couple of funny moments in the game (usually in boss fights) which Patton delivers very well, my favourite being an easter egg when fighting a giant mechanical worm boss. I don’t want to spoil it, but let’s just say that if you die the first time round Super Joe’s actual instructions differ very slightly from the subtitles on the screen when you try again. At first I wasn’t sure what I heard, until Spencer’s response was replaced with a confused “…Um”. It actually made me laugh out loud, and the game could have benefited from a few more of these skits.

Overall though, the story is passable enough. There’s a healthy amount of mystery and intrigue and no characters loyalties and motivations fall within the old fashioned good and evil templates. There are a few twists and turns to keep you interested, and only one of them really falls flat on its face. Trust me; you’ll know it when you see it.

Going Commando
It’s obvious before you start playing this game that Nathan’s bionic arm is the focal point of Bionic Commando. Otherwise it’d just be Commando, and while I’m a fan of that particular Arnie flick I don’t think it would translate well into a next gen game. So it’s a good thing that the aforementioned appendage handles fairly well (trying to think of a “handling appendages” related innuendo… ah forget it).

You get a good feeling of momentum while you’re swinging through the air and releasing at the perfect time to launch yourself skyward is very satisfying. Messing up a swing usually sends you flying directly upwards, giving you just enough time to think “Oh S**t” before you start to plummet to the ground, which can be pretty frustrating at times. Another facet to the bionic arm is that you can’t do a Spider-man and attach it to thin air; you have to look directly at whatever surface you want to latch onto before pulling the trigger. It’s pretty unforgiving and at first the little niggles wore down my patience, but eventually I grew to appreciate that this kind of platforming really needs to be a test of precision and skill, which this element of using the arm achieves. Overall the bionic arm is a triumph, and is a very well executed way of taking you to wherever you want to travel to in the ruins of Ascension City.

That is, if the game actually let you go anywhere without throwing invisible walls in your face. Considering how effectively the bionic arm gets you around, Bionic Commando is incredibly linear, mind-bogglingly so in fact. You see, the attack on Ascension City has left pockets of blue, gassy radiation which you are unable to travel through or attach your arm to. This stuff is absolutely everywhere, and you’ll often find yourself being forced in a perfectly straight line to your next objective, which really negates the purpose of what the arm was actually created for in the first place. When you add the fact that the radiation quickly drains your health when you get near it (in my case, finishing me off when I’m in the middle of a fight), I can guarantee that there will be more than one occasion where you will have a radiation-induced urge to smash your controller off of the nearest hard surface.

Apart from using your arm to get from A to B (and nowhere else), it can also be used as an offensive weapon. The actions you can perform with your arm are pretty much what you’d expect; using it to throw things at people, throw people at things, launch yourself at people and/or things and a few more. The main problem with these abilities is that you unlock them at certain points in the game, and I found myself having a pretty scarce set of moves until about a third of the way into the game. Once you do unlock them though they’re really good fun to use and just about compensates for the gunplay, which is extremely clunky.

Your standard weapon is the silenced pistol while you can pick up one additional weapon through reaching weapon drops at certain points in the game. The main problem is that the weapon drops are fairly rare, and each weapon has very limited ammo, which can lead to some fire-fights being unbalanced (Trying to shoot a sniper with a pistol? Not fun). This wouldn’t be so bad if the pistol was usable, but the fact after you press the fire button with most weapons the bullets can go absolutely anywhere. Unless you zoom in the spread of gunfire is extremely wide, but zooming in slows you down so much that you might as well just save yourself the hassle and go for a stroll in some radiation. 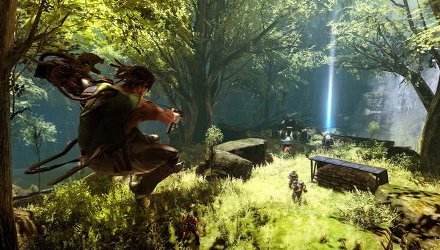 This may look good, but it's going to end in you wasting a whole clip of ammo

It’s a shame that the combat is so hit and miss, since some of the set pieces work very well (the boss fights are particularly exciting) and made me think of how much a missed opportunity everything else was. If a bit more effort was put into making the combat more fluid and natural, Bionic Commando would have been a much better game for it. Unfortunately, most of the fights are just a reminder of what could have been.

Wow! That unreachable object looks amazing!
Bionic Commando can be visually striking at times; the draw distance really doesn’t seem to end. Looking over the vast ruins of the city always pleases the eye, but at the same time frustrates when you realise that more of that bloody blue gas is stopping you from ever going anywhere. The lighting and textures are all very sharp and the game doesn’t suffer from any kind of slow down even when you’re flying through the air at high speed. While there are really only three different types of environment to play in (city ruins, city park and some underground caves) each zone is pretty varied, and the park sections of the game look absolutely outstanding, with some of the best water effects I’ve seen in a next gen title.

Overall, although some of the special effects such as explosions could have used a bit more tweaking time, Bionic Commando is generally a very nice game to look at. It’s just a shame that you don’t have the option to climb to the highest rooftop and admire the view.

I had Faith, but No More?
For possibly the first time in my gaming life, the audio aspect of Bionic Commando was one of the elements of the game that I was most excited about, or the voice acting to be more specific. The main reason being that Spencer is voiced by Mike Patton; lead singer of the awesome Faith No More, voice of The Darkness from the titular game, the Nightwalkers from Will Smith ego-fest I Am Legend and much more.

Unfortunately, Mike really doesn’t have much scope to show off just how much cool stuff he can do with his voice (for example, the voice of The Darkness isn’t helped along by special effects, it’s just him). Not to say that the voice acting is unsatisfactory, it’s actually very good, but it just seems a bit generic for Patton’s vast vocal talents.

Swinging Parties
The multiplayer essentially shares the pros and cons of the single player, with the bonus of the maps being open ended and absent of any radiation. It’s also more of an even playing field since your enemies have the same annoyances to deal with as you do. Every game I played in was a lot of fun, with plenty of epic airborne fights and “Did you see that?!” moments. The content is a little bit on the thin side, so it will probably lose its appeal pretty quickly (it’s also quite hard to find a game), but it’s a solid addition to the overall game, and it out-performs the single player on a few aspects to boot.

Avoid it, try it or buy it?
Bionic Commando is a bit of a conundrum. There are some really fantastic elements to the game, as well as moments of pure adrenaline filled fun that would fail to please anyone. Unfortunately, some of the gameplay mechanics that gel these moments together are clunky, flimsy and underdeveloped, and stop the game from venturing above average most of the time. Although I was thinking of writing it off early on I stuck with it and I don’t regret doing so; Bionic Commando is an enjoyable, albeit flawed, experience. Now that it’s available for some relatively reasonable prices, I would say that this should definitely be given a chance. You never know, you might even reach heights of pleasure that I didn’t think Spencer’s arm was capable of reaching.