When the Assassin’s Creed Brotherhood Multiplayer was announced, many people were ecstatic about its new and innovative ideas. However, a big group of PC gamers felt that it was a little too familiar to something we had played before. That was The Ship, a gem of a game where players had to murder carefully selected opponents in interesting ways without incurring civilian casualties or letting security see them welding a revolver. Now Outerlight’s latest game has graced Xbox Live Arcade and Steam and it’s a fitting sequel to the original covert murder them up.

Bloody Good Time sets you up as one of a group of young actors wanting to take part in a film being run by the mysterious (and temperamental) Director X. However, to step up to the role, you need to kill your seven fellow actors with a variety of ingenious weapons in three different film sets. As it’s a primarily multiplayer based game, this is the only real story you’re given. I quite like it, as the back-story effectively links with all parts of the game from the art style and character design, right down to the basic gameplay.

A good time?
A basic game of Bloody Good Time is split into several rounds, each of which can have one of several game modes. Hunt requires the player to find and kill their target before they themselves are hunted down. Revenge gives players multiple quarry one after another but previously killed players can gang up on their killer in order extract sweet vengeance. Elimination is last man standing, giving a player one quarry at a time until they are the last one left. Finally there is a straight up deathmatch which gains occasional rule changes such as hunting the leader or trying to pass on an infection in order to gain the highest score. These various modes are a lot of fun, especially when they start changing stuff up mid-game.

In game, it plays like a standard first person shooter, however, instead of the usual basic weaponry, you will pick up a wide selection of gear, from baseball bats and frying pans, right up to radiation guns and Molotov’s. Throughout the game, each weapon is assigned a star rating which works out the score; the higher the stars, the more points you gain when you make a kill with it. On top of this killing phase, there is also the need to keep your character fed, rested and not desperate for the toilet. This adds a pretty cool mechanic as you have to gamble your time spent fulfilling your needs so your pursuer doesn’t simply find you napping and break your neck.

There are only three levels in Bloody Good Time but each of them are good fun. All of the maps have one or two focal points all players will wander through at some point but those who know the map will find the more unusual weapons off the beaten track. The three maps are also expertly styled after the various stereotypical film settings; from the classy version of Las Vegas to the trap-filled horror house, each is packed full of character and the perfect backdrop for the madness that takes place. 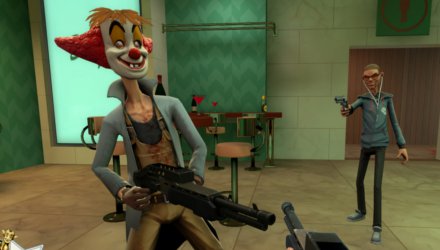 KILL IT! KILL IT WITH FIRE!

Bloody Team Fortress!
Bloody Good Time has an excellent art style. Its cartoon styling is perfect for the madcap violence that occurs in the game especially with the character design. The overly stylised character design is spot on in a similar way to that of the TF2 characters and each different type of target can be spotted at long distance, so you can easily hunt them down and stab them in the face.

That bloody sound!
Bloody Good Time may have its strong points but the sound is probably a weak link in the chain. Most of the weapons sound pretty flat and the director’s instructions are a little repetitive, especially when he shouts them out at the start of each round. The background music suits the theme of the game, though, but you haven’t come to this game for the music.

Unfortunately there is a bigger flaw then the sound. At time of review, there are plenty of servers out but player numbers seem to fluctuate massively. I get the feeling that despite its cheap price on launch, not enough people have picked it up, which is the kiss of death for any multiplayer focused game in spite it obvious plus points.

Time for the bloody end!
It’s a real shame that this is the last game that Outerlight as a company released; just after release, the Edinburgh based company was shut down leaving just the studio head to work unpaid. Bloody Good Time is perhaps the second best version of the hunter style of online gameplay, only slightly behind the slick joy that is Assassins Creed Brotherhood’s multiplayer.  In terms of Bloody Good Time though,  I recommend picking it up when it’s in a sale as it is still a good time even with just bots.