As a huge fan of both Warhammer 40,000’s Imperial Guard and games from Relic, it’s pretty much a given that I would love the latest expansion pack to Dawn of War II. This is an expansion pack which brings those weak, squishy masses of humankind to Relic’s tactical game. However, the game is also perhaps the best entry of the series, bringing all the races from all of the games and finally shedding some of the oddities that flawed the previous iterations.

For those gamers who don’t know, Warhammer 40,000 is a sci-fi universe set in the 41st Millennium, and is ravaged by war. It’s the perfect set-up for games, and Relic’s Dawn of War series has been the prime example in recent years.

For the Emperor… or not….
The latest game is set a few years after the events of the previous game Chaos Rising. Retribution has six campaigns (one for each race) that each tell a similar story but with each race’s slant. In fact, certain missions are exactly the same with only one or two racial differences. The plotline itself revolves around the events of the previous games and their effects throughout the system. Having played the previous games (including the original Dawn of War game from back in 2003) helps make some of the reveals that occur throughout the game really clever. The plot also doesn’t require much knowledge of the whole universe of Warhammer 40k, but fans will find some pretty decent winks and nudges in item names during the campaign, as well as some of the voice acting.

In the Far Future… THERE IS ONLY WAR!
Retribution continues on the gameplay originally laid out in Dawn of War II. In campaign, you control a small number of units and micromanage them in a way not too dissimilar to an RPG. The game relies a lot on the use of cover and suppression, with a heavy weapons team anchoring an assault while the rest of your team works their way towards an objective. Retribution moves away slightly from the small-scale warfare by letting you recruit other standard units mid-mission. You still have your heroes but they act singularly, with their accompanying squads. This is both good and bad; there is less of a gap between single and multiplayer but the increase in the number of units you control can be overwhelming, especially in the case of the Imperial Guard units, which are large and weak to damage. They require an awful lot of micromanagement in order to prevent them being shredded by heavy weapons and close combat specialists.

As well as the mid mission units, this entry in the series also changes some other aspects of gameplay. The main part of this change is the removal of two separate pools for abilities. Ammo is gone so all abilities (be they explosive packs or monstrous powers) use the same pool to limit usage. It ends up being that some ability combos that were so successful in the last game, such as the infiltrate/demo charge way of knocking out buildings, are harder to pull off quite so frequently. Similarly, the Tech Factories, Shrines and Orbital Relays are gone and replaced with simple resources, which when captured, grant you a large sum to spend on units. Instead of being given more heroes, you can instead replace three of the four main guys with honour guard units. These are better versions of base units which can be freely replaced when dead. Vehicle honour guards can only be replenished at the large reinforcement buildings which can limit their effectiveness. 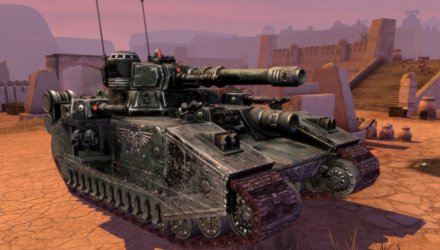 In terms of races, Retribution clocks in at a mighty six races, each with their own play style, unit selection and campaign items. The four races from the original game are all here; the balanced Space Marines, the range heavy Eldar, the hordes of Orks and the swarm of Tyranids (think Aliens). The Chaos Space Marines (evil versions of the Space Marines) are also present and they provide a more complex version of the standard Space Marines, with the inclusion of some more close combat inspired units coming to the fore. Finally the new race is the aforementioned Imperial Guard who are all about big blocks of weak ranged units mixed in with tanks. They are slower-paced and methodical than the other races, more suited to players used to the Company of Heroes games than any other race.

There are also a few other features worth mentioning. The first thing is that Retribution requires Steam and any boxed copy is simply an activation code. It also links into your steam account pretty heavily with a decent stats page displaying all the details of every single mode in addition to achievements. Additionally, players of previous versions of Dawn of War II which relied on Games for Windows Live can import their stats into the new game via a built in tool. Finally, it also comes with an Army Painter tool in the game which allows you create a paint scheme for multiplayer modes.

Visions of War
Dawn of War II runs on Relic’s own Essence engine, which is perhaps one of the most beautiful engines ever designed for RTS games. All of the units look just like their tabletop counterparts, and they all move and fight like you’d expect. Units fight with a definite weight to them, especially when jump pack infantry crash down on a target unit and send them flying. Some levels are punctuated with a great set of hand-painted vignettes to continue the story, which look quite striking and fit the gothic air of the Warhammer 40,000 universe. The graphics can chug on lower end machines and I have noticed something slightly off with one or two lighting effects but apart from that it’s a damn good-looking game.

Do you hear the voices too?
I’m also a big fan of the sound effects in the game. The voice acting is spot on for each unit, with some great lines of dialogue (including guardsmen spouting “It’s dangerous to go alone, here take this!”). In addition, the combat sounds fantastic, with great explosions and gunfire effects. I’m not a huge fan of the in-game soundtrack though; although it perfectly suits the world, it isn’t memorable and can become pretty repetitive. 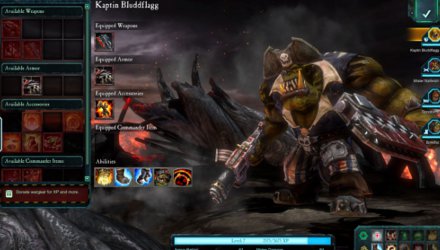 Keep Your Friends Close and Your Enemies Closer
Another big draw of the Dawn of War series is the multiplayer. It’s actually a very different beast to the single-player. Instead of controlling four teams RPG style, it’s a lot closer to Relic’s last game, Company of Heroes. You construct units and level up your base structure in order to build bigger and better units. There is a huge number of maps available to play and combined with the two modes (victory points and annihilate) means each battle is pretty different from the last. There are one or two issues. The main issue with it is that Company of Heroes does it all even better and is much more enjoyable. Additionally, the AI for multiplayer maps is rubbish as it spends most of its time sat in its base.

Perhaps of greater interest is the Last Stand mode. After selecting your hero (one for each race) you join up with two other players to fight back hordes of enemies ranging from millions of Tyranids to a small group of heroes who are the exact mirror image of your own team. It’s a great mode that also has its own progression. As you play and gain more experience, you unlock even more gear to outfit your hero with. I actually think this is the better mode of multiplayer, as opposed to the standard fare of the main multiplayer game, this is a much more unique mode. Also, the constant RPG progression is greater fun long-term than simply playing battle after battle. 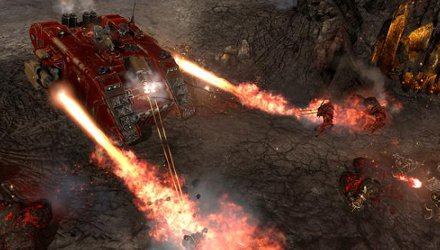 The Final Judgement
Retribution is the best entry in the Dawn of War II series by far. It is an excellent package with a huge number of modes and races to play with. I thoroughly recommend it as despite its shortcomings in the standard multiplayer department, the campaign and Last Stand more than make up for it.