Driver is a series that’s seen plenty of ups and downs since its inception, with most of the latter coming in recent years. Still, there remains a lot of fondness for the cop drama thanks to the original, with a focus on fast-paced gameplay and stylish driving skills still fresh in the memories of fans. Although the game hasn’t hit the lofty heights of praise received since then, it’s fair to say that the franchise has improved a lot since Reflections Interactive stopped trying to play Rockstar at their own game in Driv3r. No more so has this been evident with the recent release of Driver: San Francisco, which, without setting the world alight, has been picking up praise from around the industry.

Alongside it, Ubisoft, seemingly independent of Reflections, have quietly released Driver: Renegade 3D for the 3DS. Is it another good step in restoring a tarnished franchise?

‘You suck, Tanner!’
First off the bat, I have to state that the storyline in Renegade is absolutely the worst aspect of the game. Wafer thin and told in badly animated, mostly static cut-scenes, the game follows the series’ regular protagonist, Tanner, as he takes on a role in an anti-crime task force for the local district attorney. Like every other district attorney depicted in games and movies, he’s desperate to make his own stamp on the city’s criminal underbelly, and sets about letting Tanner do things in his own, feet-first way.

This is really clichéd stuff, with a predictable, dull plot that puts you off right from the start. You can see everything coming a mile off: you go after the criminals, they want you dead, and someone on your team is a rat; yadda yadda yadda. It might have made for a more interesting story if it wasn’t so badly told. 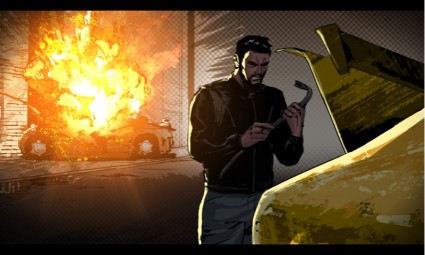 Looks way better here than in the game.

In a bid to make the game seem more adult in flavour, you also have to put up with pointless overuse of bad language and other adult themes, which in turn actually make it seem more childish and tasteless than adult. I’m no prude; I love gritty realism, and I drop the f-bomb excessively myself; however, there’s a classier way to do this in games than Ubisoft have here. It’s used for the sake of it, rather than when it’s artistically right.

Combine this with characters that are all so desperately unlikable, and you end up with a game that you won’t be playing through to be immersed. It certainly doesn’t help a game when you can’t connect with the main character, and unfortunately, Tanner himself is top of the list when it comes to the unlikable tosspots that you’ll encounter over your playthrough.

I like driving in my car…
Once you get into gameplay, things get a little better, and it’s a game that’s probably more in-line with the original when compared to the newer games in the series. You have two main modes, Story and Career, and in the former you follow the insipid plot described above. Before jumping in, you’ll be asked to choose which difficulty you want between Easy and Hard. Just be warned; tackling the story on the Hard difficulty is the only way to unlock new vehicles for the other modes. Oddly enough, the Hard difficulty is actually quite easy, so you shouldn’t really encounter any issues playing through the game and unlocking everything you want first time.

In each level, you’re given an open world and an objective; destroy this car or these buildings, avoid the attacks, chase this car etc. The handling of the cars is actually pretty slick (and it should be, as you can’t get out of them), and you can easily drive at high-speed, performing handbrake turns around corners as you try to complete your mission. You have some other tricks up your sleeve too.

Tapping either the left or right bumpers will see your car shunt in that direction; useful for knocking enemy cars off the road. In driving stylishly or recklessly, you also build up a Rage meter. This acts as a Burnout-style boost, which not only speeds you up, but also makes you dish out more damage while taking less yourself. If you happen to spot a shiny enemy hideout and drive through it, you can earn a full Rage meter instantly. If you do happen to take a lot of damage in-mission, you will need to drive through one of the garages dotted around the city before you explode. Picking and choosing when to do this is key, as some of the missions might require you to stay within a certain distance of a target. 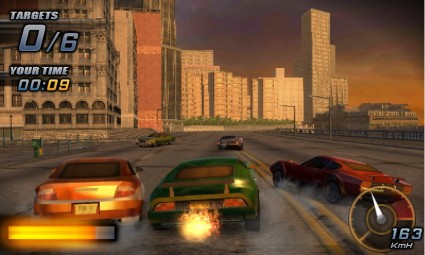 There is definite fun at times; however, it’s counter-balanced by the fact that the story mode is so painfully short. There are twenty missions here, but at their longest you’ll have each one of them completed in under the ten minute mark, as long as you know what you’re doing. So you’re looking at a couple of hours’ worth of gameplay for a full price game.

The Career mode goes a little way in making up for this, and is pretty much your portal to jump into quick, context-free racing game types. You have quite a number of options to choose from. You’ll need to unlock some of these, and other cars as you go along, by winning races and increasing your race level. Each event in this mode has 12 different races, and the event types are as follows:

Freedom Racing sees you in an open world race from one destination to another. Much like similar modes in Burnout: Paradise, you can go any way you want around the city, and the only objective is to get there before your opposition. Killing Road is more of a straight race against tough opposition, while the name of Time Attack already tells you what you need to know. Elimination is a bit of a last man-standing affair, where the person in last place at the end of each lap is removed until you have a winner.

Not exciting enough? Well, there are options for the more destructive amongst you. In Rampage you must destroy a set numbers of cars in your given time limit, while Demolition Run just sets you let loose, trying to score as much damage to public property as possible. Finally, Afterburner comes with the only instruction of ‘Destroy Everybody!’. The objective is pretty clear.

The thing is, you know what these all sound like? Multiplayer modes. You know what Driver: Renegade 3D doesn’t have? Multiplayer modes. All of the above game types would be enormous fun online or in local play with other 3DS owners, and without that, it makes each one a bit of throwaway amusement with no real incentive to keep you coming back. It’s a glaring omission, really.

In terms of 3DS-specific features there’s only really one, and it’s that the game will swap high scores via Streetpass, rather than online. Great, if that’s your bag, but I found it pretty insignificant. 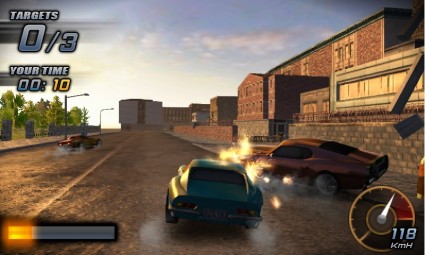 A car wreck…
I mentioned the cut-scenes earlier, and I’ll mention them again here; they look terrible. In style, it feels like the developers were aiming for something akin to GTA: Chinatown Wars, but have missed by quite a margin. It’s not so much ugly as it is washed-out and grainy, in low quality video. That aside, as an art style it didn’t appeal to me, feeling messy or unfinished. It looks even worse in-league with the terrible animation.

Thankfully, in the actual game, it’s actually quite pretty. The city is well mapped out, the buildings and street furniture are as detailed as they could be, and the cars all look real enough, with decent damage models to boot. It actually took me by surprise a little in regards to how polished it looked, and it runs smoothly too.

It’s not perfect, though; the streets are relatively empty with few obstacles or other cars (there are other cars, it’s just a quiet city!). There are also no pedestrians at all, which is an understandable omission from a technical standpoint, but it makes the streets feel eerily devoid of life. The draw distance isn’t that brilliant either, as you can see the city drawing itself only a little way into the distance, and obstacles caught me by surprise a couple of times as a result.

Lastly, the 3D is also surprisingly low-key for a game that boasts the ‘3D’ so proudly in the title. I struggled to tell the difference in-game when switching it on and off. Fair enough, but it’s odd when the menu system utilises the 3D better than the actual game.

The engine doesn’t quite purr…
We’re back to complaining about those cut-scenes again, as the voice acting that accompanies them is absolutely terrible. It’s pretty poor when you can tell who is a friendly and who can’t be trusted, based solely on their Saturday morning cartoon voices. I don’t know if this a specific direction chosen by the designers, purposely aiming for cheesy, but it doesn’t really work for me.

The voice acting also comes into gameplay, as Tanner constant repeats trite statements loudly over the weaker sounds of the cars and the city. So, you’ll hear things like ‘eat shit asshole’, or other such sentiments every minute or so. The first time you catch it, you’ll laugh at the childishness of it, but after you’ve heard it for the tenth time you’ll soon be bored. Elsewhere, it’s back to disappointment as the other general sound effects merely suffice.

The soundtrack fares better, with a licensed soundtrack somehow hidden away and only available in the career mode. There are some great songs on here, like ‘Devil in me’ by the 22-20s, or ‘Don’t give up’ by The Noisettes, and others covering different genres. Unfortunately, you can’t just enjoy the songs, as Tanner’s aforementioned bullshit still interrupts every so often, even turning down the music volume to make sure you don’t miss what he has to say. 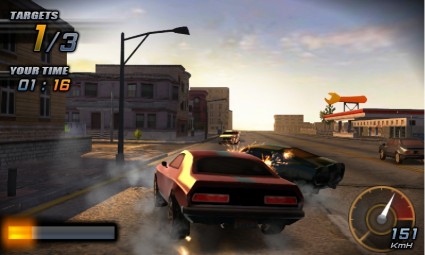 Power-sliding is both fun and easy...

Just drive by…
To put my thoughts into perspective, Driver: Renegade 3D is far from the worst game you’ll ever play. Hell, it’s fun in a limited capacity for the short while it lasts. Even if it was longer, though, it would only serve to increase your exposure to the sloppier and more grating elements that the game brings to the table. You can’t help but feel that if they’d turned that Career mode into an Online mode, it would have gone a long way to making it feel like a more worthwhile package. As it is, it feels like a rushed cash-in on Driver: San Francisco, and one that I can’t wholly recommend.

It’s ironic that a game called Driver can be so distinctly pedestrian.