It’s always a worry when something that you love and are protective of is subjected to a change in management. No matter how good a job the new guys do it’s inevitable that a large majority of fans will shout “What have they done to my game!?” from the rooftops. This is especially true of the Fallout series, which boasts some of the most hardcore (and unforgiving) set of fans in gaming.

With the announcement that Bethesda Softworks (scribes of the Elder Scrolls) had acquired the Fallout IP and were developing a third title, messages of excitement and indignation poured onto forums across the globe. Being a fan of the series myself, and also of Morrowind and Oblivion, I found myself being pretty excited about the latest instalment. So is it worthy of the glorious Fallout name, or should it be locked up in a Vault and never spoken of again?

War… war never changes
For those of you haven’t heard of the Fallout series (slap yourself in the face until you look like a roast ham…*ahem*), here’s a quick history lesson. Fallout 1 and 2 are turn-based RPGs that were developed in the late 90s by Black Isle Studios. Set in a bleak future where most of the planet has been annihilated by nuclear war, you took on the role of someone who had to explore the desolate wasteland of the U.S.A, despite being completely oblivious to what a dangerous place it had become.

Fallout 3 puts you in the Vault suit of The Lone Wanderer; a resident of Vault 101, who wakes up one morning to discover his father has escaped from the seemingly inescapable bunker. What starts as a quest to find your father turns into something much more serious, as you get involved with The Brotherhood of Steel, the grotesque Super Mutants and the shadowy bastards of The Enclave, who are essentially the remnants of the U.S. government.

The plotline of Fallout 3 is pretty impressive. Since the character you play has never experienced the world outside Vault 101, you have to base your knowledge pretty much solely on what other people tell you. The populace of the Capital Wasteland aren’t exactly the most trustworthy chaps around though, so you’ll often find yourself having to make decisions on the word of someone who is more than likely lying to you. It makes for some pretty intriguing plot developments, and I certainly was always motivated to press on and find the next piece of the puzzle. 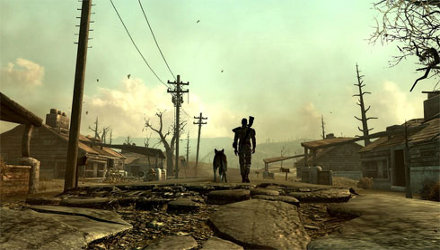 The only real problem with the story is that the factions you find yourself aligning with or fighting against aren’t particularly well developed. While you’ll often be subjected to every individual characters life story, newcomers to the Fallout series will be left in the dark about where the Super Mutants came from, or what The Enclave’s true motivations are. Bethesda also made the decision to turn the Brotherhood of Steel into a basic group of good guys/protectors of the people, which I didn’t really appreciate. Overall though Fallout 3’s plotline is a major plus point in the game, and although it’s a drastic departure from the tone of the first two games, I think it enhances the Fallout universe rather than detracting from it.

Things to do in D.C. after it’s been blown up
One of the biggest successes of Fallout 3 is the world itself. While Oblivion’s game world was generated through a formulaic piece of software, every tree, house, town and cave in the Capital Wasteland has been placed there specifically by a dedicated team of designers. As a result, you’ll find that you won’t have to walk far to find something to do, and every time you do come across a point of interest, it will keep you busy for a long time. On the other hand though, I think the world has been made a little bit too “busy” as a result. It’s supposed to be the end of the world, and coming across a new small pocket a population every five minutes takes away the feeling that you’re one of the last people left alive on the planet.

Despite the population of post-apocalyptic America being pretty dramatically lowered, you’ll find that the bulk of its population haven’t banded together in a bid for survival. In fact most of them are hostile, violent psychopaths, which is where Fallout 3’s combat system comes in. You can play it as a straight real time FPS, but to be honest playing Fallout 3 this way is too quick, unsatisfying and will result in you wasting heaps of ammo.

To get the most out of combat, you will have you to use the Vault-Tec Assisted Targeting System, or V.A.T.S, which stops time and allows you to pick a body part to shoot at, giving you probabilities of making the shot before you pull the trigger. It’s a welcome nod to the turn-based combat of the earlier games, and a successful shot will often result in a slow motion playthrough of your target being blown to bits. These action replays are a bone of contention for me, since it gets old pretty quickly watching limbs pop like water balloons, and even the simplest of shot with the worst weapons in the game will result in your enemy’s head evaporating into thin air. While it undoubtedly is funny to watch, I preferred the grittier, more serious gore of the earlier Fallout games to the slapstick bloodiness of Fallout 3.

There are around 15 main quests in Fallout 3. It might not seem like a lot but it will take a couple of hours to work through each one, and the chances are you’ll find yourself being distracted by the many interesting locations dotted around the map. On my first playthrough I notched up just shy of 100 hours of gameplay, which is quite an unbelievable statistic considering I’m sure I missed plenty of content. You’re usually given a degree of choice regarding the way you go about completing each quest, i.e. stealth, hacking or all out combat. However, most of these decisions are pretty insignificant and you’ll often find yourself having to go in all guns blazing more than once in most quests, which is pretty disappointing.

You can almost see the radiation!
Bethesda have done a pretty impressive job with making Fallout 3 as visually appealing as possible, especially considering they are restricted to using nothing but brown, grey and greyish brown throughout the entire world. Fallout boasts some very impressive draw distances, and it really takes your breath away at times reaching some high ground only to look out and see… absolutely nothing. To put it simply, the Capital Wasteland really does look like a land that’s been ravaged by nuclear war, and it looks absolutely stunning as a result. 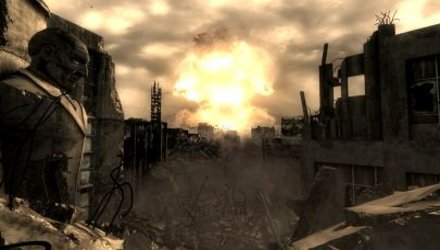 Hey what does this button... do? Oops

Of course the Lone Wanderer has other areas to explore outside of the desolation of the Wasteland. As nice as it looks, you have to break up looking at nothing every now and then with a cave, dilapidated building or sewer, which are served in droves here. The lighting effects in these sections take me back to the generic dungeons of Oblivion, but the “dungeons” of Fallout 3 are pretty varied and interesting to look at. Again, it all looks very bleak, but anyone who expects to come across a bouncy castle in the Wasteland should play a different game or brush up on their modding skills.

My main complaint regarding the graphics is with the characters themselves, who really could have benefited with a bit more polish applied to their stiff animations. It’s really only a problem with the humanoid characters, and the models themselves are fantastic. Unfortunately, it’s whenever they’re forced to make any kind of motion that they start to look a bit, well… crap. Most movements are jerky and robotic meaning that there’s no real fluidity, while the running motion is particularly reminiscent of Peter Crouch celebrating a goal (he did The Robot for all you non-football fans).

Overall though, manikin-like, soulless NPCs don’t detract too much from the fact that Fallout 3 is a technically stunning game, with some fantastic special effects to boot. It’s a great game to look at most of the time, and I can’t think of anything else that Bethesda could have done to get the most out of a barren desert.

“Didn’t I talk to you five minutes ago?”
As soon as I fired up Fallout 3 for the first time and heard the familiar phrase “War, war never changes” in Ron Perlman’s husky growl of a voice, I had a good feeling about the quality of the voice acting. The big names are a joy to listen to, I particularly loved Malcolm McDowell’s almost embarrassingly patriotic and hopeful President Eden, while Liam Neeson delivers every line with a kind of silky tone that made me go weak at the knees more than once (which I’m in no way ashamed of).

In contrast, the stock NPC’s are very hit and miss, and can really take you out of the moment a lot of the time. There aren’t a great deal of voice actors for the non essential NPC’s in the game, and it kills the immersion a bit when there’s no discernible difference between the megalomaniacal Mr Burke, and the Protectron that roams the Super-Duper Mart. As an aside, whoever did voice Mr Burke needs to buy into the “less is more” school of thought. Imagine Dr Evil from Austin Powers, now multiply the hammy acting by five, add some eeeevil breathy contemplative silences, and then multiply the hammy acting by another five. I was genuinely surprised that he didn’t yell “Soon, all of this be mine, fly my pretties, FLY! MWAHAHA!” after accepting a quest from him.

The backing soundtrack is vintage Fallout. Listening to Billie Holiday or The Ink Spots while traversing the Capital Wasteland just seems right. It fits in perfectly with the retro theme of the Fallout series and also acts as a pretty enjoyable distraction when you’re walking through a particularly empty section of D.C. If the music isn’t your thing, you can just switch it off via your Pip-Boy and have the eerie silence of nuclear winter as your backing track, which to be honest works just as well some 1940’s jazz classics.

Buy it, try it or avoid it?
While most Fallout fans will find that this doesn’t really feel like the earlier games in terms of humour and tone, as a standalone game it’s really pretty breathtaking. The level of content in the game is astounding, but to be honest you can have just as much fun exploring the Wasteland as you can following a specific quest. The fact that I’ve played it for over 100 hours and am still pining for more is testament to just how much has been crammed into this game, and I’m looking forward to a marathon session through Fallout 3’s numerous downloadable content packs (stay tuned for my Fallout 3 DLC review special!)