Music can be a funny thing. In a similar fashion to games being lost in translation or just plain massacred when adapted to the cinema, music fans do not like to see one of their favourite bands or songs being misused or mistreated in any kind of media. This is particularly true with Metal, and when it comes to Metal, you don’t get much bigger than Metallica, (apart from the clearly superior Megadeth, discuss!).

So when Activision made the decision to take on Metallica’s story and bring it to the popular Guitar Hero series, they may have not realised just how much of a responsibility they had taken on. There was always going to be a danger that it ended up just being a regular Guitar Hero game with Metallica licensing ungracefully shoehorned in, while it should be more of a celebration of the band themselves. I’ve always wondered what it would feel like to be on a massive stage playing some of the best thrash songs around, and now I have my chance! Fair enough, the stage is more of a bedroom but we all have to start somewhere.

The Pick of Destiny (Well, it might as well be)
Guitar Hero: Metallica, developed by Neversoft, is the third spin off title in the Guitar Hero series after Rock The 80′s and the frankly lame Aerosmith title, in which you’ll be picking up the axes, sticks and mics of the most popular thrash metal band in the world, Metallica. Interestingly, you won’t spend the entire game controlling Hetfield and Hammet’s fingers, as the campaign is told from the perspective of your own personal guitarist, who is part of a Metallica influenced band that are supporting them on their latest world tour.

The story is really pretty minimal, although I don’t expect anyone would be craving a Some Kind of Monster style sobfest in between every song. There are short cartoon cut-scenes which act as links between the different venues, and also detail little subplots like your band being signed and a rivalry between yourselves and a glam rock band who want to be on the tour. The style of these scenes is identical to other Guitar Hero games from Legends of Rock onwards, with no dialogue and lots of devil horns being thrown around willy-nilly. Essentially they look like they were scripted by Jack Black, but they’re actually quite charming and funny, and so short that they don’t break up the flow of the game in the slightest.

Master of Puppets
The core gameplay of Guitar Hero: Metallica is identical to any game in the Guitar Hero or Rock band series. You’re given the choice of selecting lead guitar, bass, drums or vocals (although disappointingly no rhythm guitar, they’re a thrash band for goodness sake!). Apart from the vocals, most instruments act in similar ways, with notes falling towards the bottom of the screen, while you have to strum or hit the corresponding button on the guitar or drum-kit when the note reaches a certain point on the screen.

Nothing new there, although Guitar Hero veterans will probably be in for a bit of a shock when they discover the difficulty has been ramped up a fair bit. I usually start off by playing on Hard, but as the game started off with the riff-heavy For Whom the Bell Tolls, I found my fingers frantically flailing around the guitar and the crowd were booing me off the stage in about twenty seconds flat. It takes a bit getting used to, but there’s something about playing metal songs in Guitar Hero games that just gets my adrenaline pumping, and GH: Metallica on hard certainly delivers on that aspect better than any other game in the series. 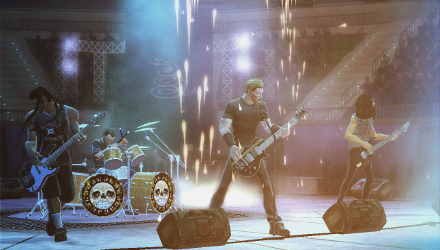 "Prepare to have your face melted off by our metally awesomeness!" (Actual quotes)

Once you’ve played the first couple of songs, you get to create your own character who takes to the stage every time you play a song by one of Metallica’s many supporting acts over the years. There’s an impressive deal of customisation on display, although most of the clothes are laden with spikes and skinny jeans, which makes it a bit difficult for you to create a character that doesn’t come across as a bit of a pleb. Nonetheless I managed to create someone that looked vaguely acceptable, and my band’s (Rasta Metal Boogie) career supporting Metallica started to gather momentum.

The career is split up into around 8 tiers of increasingly difficult tracks. Within each tier is a set of support songs followed by three or four Metallica tracks. To unlock the next tier of songs you have to achieve a set number of stars (which are collected by playing songs well). It’s a perfectly logical and effective system of controlling the content and difficulty levels, although you usually only have to complete a couple of songs at a time to unlock the next tier, which could encourage some players to ignore earlier songs once the next tier has prematurely opened up.

Graphics Inc.
Since your eyes will be focused on the incoming notes while playing through songs, the level of detail in the visuals of GH: Metallica isn’t too important. However, a lot of effort has still been put into the artistic design and it really pays off. The menus in the game all have a very bootleg feel, as if they’re scrawled on a notebook by the band themselves.

The character models of the band are for the most part pretty good. They still follow the style of previous games, with exaggerated facial features and the like, but the resemblances still hold up well to scrutiny, although James Hetfield looks a bit like a zombie at times. One thing that Neversoft have absolutely nailed is the way the band moves on stage. James, Lars and co. also stopped by the Neversoft offices to get dolled up in funky jumpsuits and record the motion capture for the songs, and it makes it feel like you’re actually watching a live gig when you see the finished product. Hetfield’s mannerisms shine through when he’s singing, Rob Trujillo stomps about the stage like some kind of troll and Lar Ulrich, well, just goes absolutely mental for the duration of the song. I’ve seen Metallica live twice now, and it really surprised me to see how well they’ve managed to recreate how Metallica actually act on stage, it really improves the quality of the game as a whole. 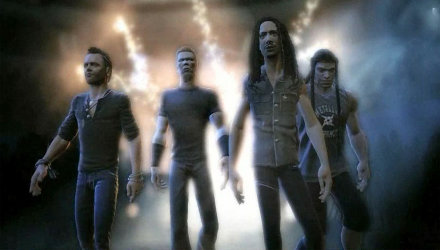 The venues themselves are also pretty impressive to look at, with Donington Park in particular looking very accurate. Neversoft have clearly taken a good long look at a few DVDs of Metallicas live shows, with pyrotechnics and props all showing up right on queue in songs, all of which makes the experience a lot more satisfying to play through. My only real complaint with how each gig looks is the crowd, who only change the way they behave depending on how well you play, regardless of the song. Fair enough if the crowd are going crazy if you absolutely nail Battery, but it doesn’t work so well when you’re playing Tuesdays Gone by Lynyrd Skynrd.

Greatest Hits (Give or take a few)
As you’d expect, GH: Metallica give you plenty of opportunities to thrash out like it’s the 80′s. The soundtrack is essentially a “Best of” Compilation of Metallica’s hits and fan favourites throughout the years, and there’s something in there that all Metallica fans will be delighted to see included. All of the albums have been covered in the soundtrack, including the recent Death Magnetic. Even St Anger has been included (which I didn’t think was all that bad), and it’s even more satisfying playing those songs when they’ve had a little bit of production time applied to them (The drums in St Anger famously, and deliberately, sounded like someone smashing a wooden spoon off of a biscuit tin).

Apart from Metallica’s tracks, you can also play songs by a collection of artists who influenced, been influenced by or supported Metallica over the years. There’s an impressive variety of artists and songs here, although I was a bit disappointed that you have play through them at first before you get access to Metallica’s songs for that tier. Especially in the early stages of the game the supporting songs are pretty mellow. I mean, I bought this game to rock the f**k out! In the later stages of the game the calibre of supporting acts improves exponentially, with particular highlights for me being War Inside My Head by Suicidal Tendencies and Am I Evil? by Diamond Head.

The soundtrack is essentially pure fan service, and even though everyone will be disappointed at certain songs being missing (“What?! No Ride The Lightning!?”), Guitar Hero: Metallica features an impressive catalogue and playing this game has actually got me right back into Metallica after a period of listening to other things, as well as introducing me to a few songs from other bands that I’ve never even heard of.

Multallica
As fun as the single player campaign is, Guitar Hero games are always going to be party games at heart, and this instalment is no exception. Guitar Hero: Metallica provides the players with a plethora of multiplayer options, both locally and online. You can get a few mates and go through the campaign together or just jump into single songs. It’s fantastic fun when you can get a full band together, as a lot of the gameplay mechanics allow naming and shaming for band members who can’t hold a tune, and also gives a lot of data at the end of a song to allow for bragging rights to be had.

There are also a few competitive multiplayer modes which, although fun, aren’t really what the game is all about. There are straight up points scoring competitions, matches where players alternate between different parts of the song, and the Battle Mode, which brings power ups into the contest. Making the notes on your opponents screen Fade to Black (that’s the actual name of the power-up, come on, my puns are at least marginally better than that), or flipping their notes to left handed style can turn the match on its head, and certainly spice things up a bit.

Buy it, try it, avoid it?
Overall, I’d say don’t expect this to be a drastic departure from the other games in the series, this is a Guitar Hero game first and foremost, and a tribute to Metallica second. In terms of features there isn’t anything new and most of the multiplayer modes are just the same with a new coat of fiery metal paint. For hardcore Metallica fans, I’d say this is a definite purchase, as it contains a plethora of songs that will have something to please everyone. Despite there being a lack of unlockable live videos, backstage interviews etc. there is quite a lot of unlockable Metallica themed content that will flesh out the longevity a bit.

For regular Guitar Hero players, I’d say this is a rental and nothing more. While this is definitely the strongest spin-off based on the set-list, it is no more than a spin-off. Once the novelty of playing Metallica’s hits wears off, you’ll find yourself struggling to think of anything to distinguish it from any other Guitar Hero game. That’s not entirely a bad thing of course, but I think Metallica are a band that could have licensed a lot more investment and risk taking in shaking up the way the game actually plays.