It doesn’t seem that long ago since Guitar Hero 5 came out, but  it’s actually been a whole year since its release. You could say that there is little to no difference between any of the Guitar Hero games aside from their set lists, but what is different about this release is the hype that surrounded it. Early previews boasted a completely new format for the series, and an all new Quest Mode. How much can you really do with a music game though? Activision has managed to stick to some of their new ideas, but there is no doubt in my mind that some players will be slightly disappointed with what they receive when they were promised so much more.

“Money for nothin’ and your chicks for free”
The use of celebrities from Guitar Hero 5 has been stripped away and replaced by a custom group of struggling stars. The all new Quest Mode sees you embark upon an epic mission to restore life to the Demigod of Rock who is being held captive by The Beast. With this collection of rockers your task is to unleash their inner Warriors so they can take on and destroy The Beast in order to restore power to the captive Demigod. Cue some over the top rock battle scenes towards the end of the Quest, and you have Quest mode. It may all sound a little bit silly and over the top, and it is.

“We’ve taken care of everything, the words you hear, the songs you sing”
With a huge Quest mode that will probably take you about six-eight hours on an average play through, and a vastly improved Quickplay+ mode, Warriors of Rock really delivers on longevity and replay value if nothing else.

Each warrior has three forms for you to play as. First is their most basic form, the one you will play as initially. Then once you earn enough star points at their venue, they will transform into their Warrior’s persona, unlocking special abilities which earn you more stars. Their third and final persona takes the form of a spirit, but only after you completely dominate every song in their venue with a 40 star rating. It starts off easy to do in the early levels, and can be quite fun to completely obliterate songs you struggled with before, but playing the songs over again is a little bit tedious and a bit pointless unless you pride yourself on being a completionist.

You might want to get that skin condition looked at

Quickplay is vastly improved with more stars up for grabs and generally feels more enjoyable and worth doing. The more stars you earn in Quickplay, the more unlockables you get to play around with including new characters, outfits, guitars, artwork and venues. It is also a brilliant plus that all stars earnt in online and local multiplayer are carried over to your total Quickplay+ score to earn you more goodies. Powers unlocked in Quest Mode can also be utilised in Quickplay+ for a larger tally of stars to achieve higher ranks. You can only choose two powers out of the eight available, so choose wisely for the highest score possible!

“Is this the real life? Is this just fantasy?”
Guitar Hero has grown into its own style by now, and that appears to be continuing. Warriors of Rock uses mostly the same graphics but takes on a less cartoony style than the previous games, with improved mouth movements that are well matched to all songs. Cut-scenes are actually shown as cut-scenes and not cartoon story boards like we were given in the weak attempt at a story in GH5. 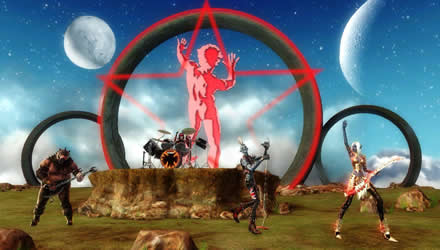 Restoring rock one fist pump at a time

“And the meek shall inherit the earth”
The choice of songs in Guitar Hero is always going to be a tough one. There is no chance in hell that you will keep everyone happy with every song choice, but there is definitely an eclectic mix to pick and choose from here. With that in mind though, the Quest mode likes to occasionally segregate genres and musical eras which is a little bit frustrating when it is perhaps a genre or era you don’t particularly enjoy. Some songs I found to be a bit dull for my preferred music taste and didn’t particularly want to play them but that has always been a personal issue I have had with the Guitar Hero series.

Fans of Rush however will be more than happy to find the complete story of 2112 to rock along to. Narrated by Gene Simmonds and with three custom made venues, these songs are a treat for any music fan to get their teeth into, and a true classic from the Canadian trio. Not only that, but 2112 forms a major part of the story so you had better enjoy it.

“These five words in my head scream “Are we having fun yet?”
When it comes down to the online experience, this delivers in terms of fun both online and locally. Matchmaking synchs you with players set to the same difficulty as you, but there is no doubt you will come up against those who have a higher skill set and make you weep as they shred out an epic solo whilst you fumble pathetically over the first few buttons. It is unfortunate that there are only three multiplayer modes as this doesn’t make for much variety, and playing against a maximum of three other players can be a serious hindrance on actually being able to see what you are playing. The more players, the smaller the fret boards and the greater your headaches. 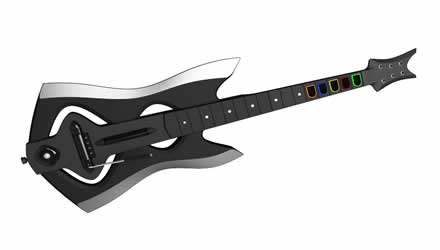 Why aren't there lasers shooting out from it?

“That’s me in the spotlight”
This is a fantastic addition to the Guitar Hero series, and it is fair to say that the brand new guitar peripheral is a definite improvement on previous versions, if still a little bit squeaky. Although a lot of things may still be roughly the same, they have been drastically improved to create a more enjoyable experience. Depending upon your music tastes then this will either be a hit or a miss, but definitely try it if you’re a fan of the series.