Killzone 3, Sony’s first ‘Triple-A’ game to be released that features both ‘Move’ and 3D functionality was released on February 26th. The face lift the Killzone franchise saw from iterations number one to two was shocking, however, does this mean that we will once again see such improvement? To find out if Killzone 3 lives up to the hype train following it or if it gets derailed; read on.

Once again, we find our soldiers Sevchenko, Rico, and Narville on the face of Helghan. However, for those of you who made it to the end of the last game, you know this fight is not looking too good. With Visari’s death, the people of Helghan are outraged. Chairman Stahl, the game’s main antagonist and industrialist, is set on the destruction of the ISA and all who assist them. While the rest of the war council that Stahl is placed on are open to ideas that will prevent bloodshed, he is set on war. Not far into the game, you are told by Narville that the war is over and the two governments are going to try and find a peaceful course of action to settle their problems.

This is obviously not true, as the Helghast have been, and still are, attacking you. During the evacuation, many ISA troops are killed and the cruiser meant to take you back to Vekta is shot out of the sky. Six months later, you, along with the remaining ISA squadron have still not been evacuated. The Helghast are picking you off one by one, and your communications with Command have been completely cut off. Living in the flourescent swamps and forests of Helghan, this is where the real story of Killzone 3 begins.

Smoother than a Helghast’s helmet!
The gameplay has undergone both large and small changes in the time between iterations ‘2’ and ‘3’. All of the weapons you used previously still do the same thing, and apart from a few tweaks (Mostly involving audio), the weapons generally remain the same. There is a new gun however, that has been spawned from the Chairman’s evil mind. Meant to be a cruel and sadistic weapon, it shoots green plasma which, upon impact, the plasma tears the victim apart molecule by molecule and in resolution; explodes. The knife that was used by many players to slash their way through the game no longer exists, and even if it did, the A.I has been considerably revamped. If you don’t use cover and choose your hiding spots effectively, you will die.

The franchise has also opted to cater for the more hardcore audience in the fact that the campaign is much harder. Having played through on trooper and found a hard time, the average player may want to try ‘Recruit’ from the get go; the game’s easiest setting. This is all due to the fact that you can no longer take the beating you were able to in the second game. Bouncing your way into combat with ten Helghast and expecting to live is not going to happen on any level of difficulty. While the medical gun used to revive you and other fallen comrades still remains, you will often find that your partners aren’t going to stand so easily right next to the area where you were just incapacitated. 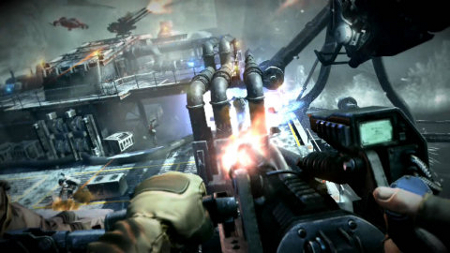 One of the on-rail sections.

Perhaps the biggest addition to the game in most people’s’ eyes is the jetpack. A new combat dynamic and unique piece of equipment is what we were all waiting for, but sadly, this is very average. It works, but only just. You are limited to using grenades and the default machine gun that comes standard with every Helghan jetpack you pick up. Not only does this make it hard to kill enemies a long distance away, but being that the computer doesn’t suffer from any of the faults a human does, you end up getting shot out the sky very, very quickly. Fortunately, Guerilla did not try to shove this on player’s backs at every waking moment. There are very few jetpack segments, and only the introductory jetpack level lasts more than fifteen minutes. 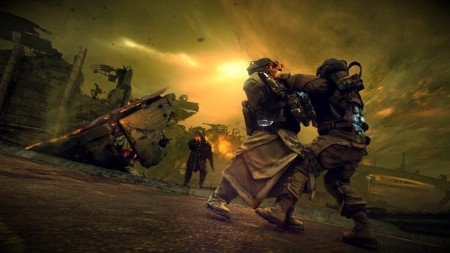 Added to your inventory is a third slot for weapons. You no longer have to choose between a rocket launcher or trusty assault rifle as Guerilla has reserved this slot for heavy weaponry. Furthermore, you will never run out of useful ammo. While each pistol may come standard with an infinite number of rounds the main weapons do not. Don’t fret however, because ammo boxes have been placed at nearly every turn. With one press of the circle button you are full on grenades and lead once again. With this, you will never feel pressed for ammo. Actually getting to the boxes and standing next to them for a few seconds has become the problem with the amped up difficulty.

On-rail segments are placed frequently throughout the game, and while they don’t offer any amazing additions to the gameplay, they are fun. Never lasting too long, and always a break from the difficulty of the rest of the game, they have become a staple for Killzone 3. There are also a few controlled vehicle segments that much like the on-rail parts of the game, that don’t offer much in terms of innovation, but are also tons of fun. The brutal melee kills are also a part of the game that can’t be missed. While it means that you’ll have to get right next to one of the Helghast, you are rewarded with a blood-spattering, jaw-dropping, melee kill that might make the less robust of players cringe.

Let it snow!
Every iteration of Killzone thus far has been acclaimed for achievement in the realm of graphics. Guerilla Games has made sure to keep that reputation with the release of Killzone 3. Everything in the game has had an enormous amount of detail put into it. The guns, the explosions, and even the backdrops are simply beautiful. Most impressive, however, are the weather effects; specifically the snow. The flurries of snow that surround you look absolutely real and even change direction intermittently. When you rotate, the snow becomes blurred, creating that effect that so many gamers savor. The environments are not just torn cities like one would expect, but actually very varied. You will travel through snow-covered landscapes, swamps, broken cities, and seemingly endless junkyards. Truthfully, there are very few things you can say to down on the obvious hard work that went into the graphics in this game. They are indeed, amazing.

However… ‘very few’ does mean ‘very few’. Really one of the only problems Killzone 3 faces from a graphical standpoint is when things go airborne. The detail of everything seems to become a bit dumbed down, and the game seems to lose a considerable amount of frames per second. The demo exemplified this, and it did not improve any through the course of time between the demo and full game. Furthermore, characters have a hard time interacting with the environment around them. When someone is sitting in a chair or is against a wall many times they will cut right into the object, leaving half a face or a missing elbow. This is by no means a game-changing element, and it’s not something that happens all the time; it’s just a nuisance. 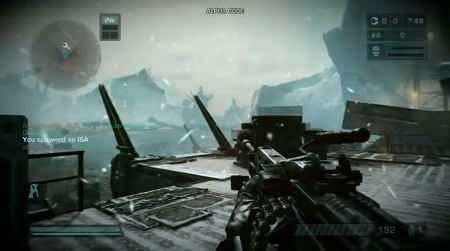 Sounds of the killing field…
Killzone 3’s epic moments are always accompanied by the theatrical music you would expect to hear in a movie theater. While this may sound awesome, it’s quite generic. The only real feeling you will get from the game’s score is the opening piece. Of course, this is the hook and leaves you wanting more, but it never comes. However, the game’s presentation and set-pieces are not be trifled with. Some of the objects and backdrops you will see throughout the game are absolutely stunning. With the correct music put in correlation with these parts, it could have turned the game into something legendary.

Getting in the zone…
There is a lot to be said about the multiplayer, some bad and some good. First off, it still feels good. Much of the mechanics remain the same, and the new maps are a nice change of pace from the old Killzone 2 ones. All of them, much like the first, have had a lot of time put into them and look beautiful. Something that may irk some (and others not as much) is the change in gameplay style. You no longer can take as much damage before becoming incapacitated or dead, and the game feels a bit more fast-paced. This makes it feel a lot more Call of Dutyish, and with the recent successes of the franchise, no one has to wonder why Guerilla Games took this path.

However, the biggest problems come with the surprisingly much-anticipated and brutal melee kills. The player can be absolutely tearing an opponent apart, but if they step a bit too close to their opponent and with a quick press of the melee button, the tables are turned. This is because the brutal melee kills initiate an animation in which the victim cannot do anything. While many will become used to it, it doesn’t feel natural and it doesn’t feel fair. 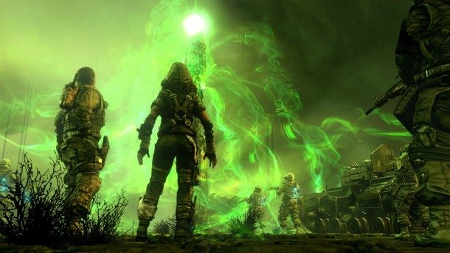 One of the many amazing set-pieces you will encounter in KZ3.

To kill again?!
Killzone’s third installment brings not only a fresh face to Sony’s always strong first party line-up, but another badge on Guerilla Game’s chest. Filled with adrenaline-pumping action, an awesome story, and a super online component; Killzone 3 forces you to forget its few minor flaws and jump into a bandwagon with all of the other Sony fanboys.