Developed by legendary giants Valve, of Half-Life fame, Left 4 Dead shambled onto our Xbox 360s in November 2008. A little late for a review, I hear you cry? Well, despite its relative age, Left 4 Dead still holds its own among the new breed of 2009, and with the sequel to this zombie epic infecting us all this November I thought I’d remind us all how Left 4 Dead changed the face of the zombie game forever.

Get to Mercy Hospital!

The first thing that struck me about Left 4 Dead is the lack of plot-line. Each of the four scenarios (five counting the recent DLC not reviewed here) are separate from one another, with only the characters and enemies linking them. Valve has made no attempt to string them together, which would be practically suicidal for any other game. But for some reason, it works. There’s enough implied back-story and in-game references to the cataclysm that has spawned the sea of zombies to avoid any feelings of pointlessness, and the lack of strong plot allows the imagination to take over. It’s quite realistic,  in the sense that in a real zombie apocalypse there’s a good chance no-one will know exactly what’s going on. I got to make my own assumptions about what happened and the story is the least important thing about L4D anyway; it simply exists out of necessity. Every game needs a setting, and this one is no exception, but it doesn’t take a genius to figure out that story line was the last thing on Valve’s mind when creating L4D.

I need ammo!
Game play, on the other hand, was most definitely the first thing. Left 4 Dead thrives on exciting, brilliantly paced action, peppered with sections of tense inactivity and brutal climaxes. The basic premise is this: four characters, lots of zombies and only one goal; get to the end of the level intact. Simple to the point of genius, this basic layout is the game’s biggest strength game-play wise. With no annoying puzzles or awkward ‘teamwork’ sections to get bogged down in, every play is a joy of shooting, running, hiding, defending and generally shitting yourself. The ‘4’ in the title isn’t just there for literary effect, the number of characters is very important. Not enough to be a full squad, but just enough so that everyone can cover someone, each player has their own personality. Even though they all handle the same, they all have different tendencies when AI controlled, which makes lonely sessions that little bit more fun.

The game is split into four distinct scenarios, with five levels in each. They cover a wide variety of areas, from decaying city streets to a destroyed hospital and derelict road bridges to a totalled airport. The quality of the levels on offer here is really top notch, rivaling that of anything Valve has done before (looking at you Half –Life…) and adding even more to the atmosphere of the game. One particular event stood out for me, on the last level of the Dead Air scenario. As you might expect, it’s set in an airport, and the final level has you waiting on the runway as a plane refuels. As you approach the tarmac however, something truly breathtaking and pant-wettingly shocking happens. I won’t spoil it for those who are yet to take the L4D ride, but safe to say it makes your heart skip a beat.

The levels, while varied, all have the same objective; get to the safe room. The last level of each scenario involves calling for help on a radio and waiting for said help to arrive. In the meantime, you have to fend off hordes of infected and generally stay alive until the chopper/boat/plane comes. These finales are genuinely exciting, and require solid teamwork to survive.

This brings me to the main aspect of L4D’s game play: teamwork. Regardless of whether you’re playing on your own or with three friends, all four characters are present all of the time, with any empty seats being filled by the ample character AI. This is essential to the game’s pace, as most situations will need you to work together to protect each other. While the bulk of the game play is shooting and running, other interesting concepts make it in there, most of the requiring another team member to cover you. Healing involves equipping a health kit, which you can only carry one of, and holding the Right Trigger for about 5 seconds. This renders you immobile and unable to attack, so getting a friend to cover you or finding a quiet spot is essential. When a team-mate goes down, you have only a short time to revive them before they bleed out and die for good. This revival takes even longer than healing, and both the victim and the rescuer are unable to defend themselves. No worries if you can’t get to a dying friend quick enough; there are special doors littering each level that house dead characters that can be rescued and returned to the game.

This is a great example of Left 4 Dead’s constant attempts at keeping you in the game. With a concept so dependent on co-op play and teamwork, having your three buddies go down for good, with no hope of rescue in the first level would ruin the entire scenario and negate the point of the game entirely.

The enemies in Left 4 Dead aren’t just your everyday zombies. More ’28 Days Later’ than ‘Night of The Living Dead’, ‘the Infected’ (as they are officially known) bound out of every possible opening in swarms, careening toward you like rabid, hungry dogs. While they will drop in their hundreds under a hail of gunfire, they can be tough to deal with in large groups. It’s here the enemy AI and animation shines; each zombie moves with weight and purpose, arms flailing and hands scrabbling for a piece of your tasty, living flesh. As a group, the Infected are breathtaking at times, coming like a river of bodies that knows no bounds. Run from a horde into a small doorway and they’ll pile in after you, filing through one after the other; they reminded me of the crazy drunks from Condemned 2, albeit faster and more purposeful. They climb, they jump, they trip and fall.

The character models are also worthy of special mention; it’s rare to come across the same zombie twice. Then there’s the special Infected. Created by Valve to spice up the basic hordes, these agents of chaos come in five varieties and become the bane of every L4D play through. The Boomer, a grotesque blob of gristle, stumbles around like a drunken beach ball with legs, vomiting Infected-attracting green bile on anyone stupid enough to stray too close. The Smoker sits on rooftops and snatches at your group with his long, quick tongue. Anyone caught becomes useless, forcing another team member to rescue them by destroying the Smoker (Danny – or using melee on the survivor dude!) . The Hunter skulks in dark corners, waiting for you to pass by; then with an almighty scream he leaps from his hiding place and pins one of you to the ground. Said victim is, again, powerless to do anything until the Hunter is righteously murderised. 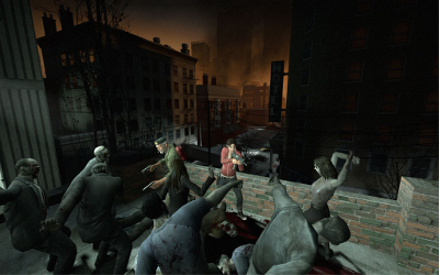 SHOOT THEM IN THE HEAD!

The Tank is by far the most imposing of the group; a gargantuan beast, he appears when you least want him to and comes out swinging. His ample arms can flatten you in a single strike and he has a nasty habit of chucking pieces of rubble at you. He soaks up damage like a sponge does water, and requires a heavy amount of teamwork to take down. Last, but most certainly not least, is the Witch. This skinny, unassuming figure kneels crying, usually in a dark room. As you get close to her, you can hear her cries. Unlike the other Special Infected, the Witch is never meant to be engaged. Turn of your torch and quietly walk by her and she won’t be any trouble. You even gain an achievement for avoiding all the Witches in a scenario. But if anyone disturbs her, she’ll take them out in a single strike and continue to tear at them until they’re no more. While she’s reasonably weak when awake, the Witch is invulnerable when she’s still crying, so every encounter is a difficult question of ‘Should I or shouldn’t I?’

The weapons and combat actions are another example of this. Valve has decided to take firearm recoil and actual clip size out of the mix entirely, which is great news. Shooting is as easy as it ever has been, and reloading is an occasional annoyance that doesn’t impact on the games breakneck pace. The melee attack, mapped to LT, is a life saver. It can be used while reloading and is sometimes the only way to break out of a slavering horde of infected. A quick 180 degree turn, which I personally never used, and the obligatory crouch are easily accessible on the bumpers, while more regularly used action like reloading and jumping are on the face buttons.

The set-up will be familiar to FPS veterans but is easy to get to grips with for anyone new to the genre. The restriction of only being able to carry one of each special item feels more like a challenge than a weak game mechanic, and only adds to the sticks-and-stones feelings of the equipment you use. The health kit, as mentioned before, allows you to patch yourself up to nearly full health. The pain pills give you a boost of health that slowly drains away, even when you’re not being attacked. The pipe bomb acts as both a grenade and a zombie attractor, its shrill beeping causing every infected in the vicinity to run toward it. This is fantastic for big, bloody group kills, but isn’t so effective against Special Infected. The molotov on the other hand is an all round crowd pleaser. Cast toward a group of enemies, it bursts into a shower of napalm and coats everything with a layer of fire. Regular infected burn to a crisp in seconds and tougher baddies will be significantly hampered by it. You can only carry one of these at once, but I found I preferred one over the other pretty quickly.