Back in 2001 Armagan Yavuz and his wife started to work on a game simulating massive medieval battles in their own garage. That was the original Mount & Blade. During the following nine years the game has grown into a niche with an extremely dedicated fanbase, not to mention a very creative modding community.

The studio (Taleworlds Interactive) grew as well, while still remaining relatively compact; with the help of an actual publisher the small but very productive wargame publisher Paradox Interactive improved the production values, leading to the release of Mount & Blade: Warband at the end of march, this year.

Mount & Blade: Warband is a mix between a RPG and a strategy game, but is also unique in many ways, so it’s not easy to make it fit comfortably in a single category. Being an independent game released by a small Turkish developer it’s quite probable that a sizable percentage of our readers never heard about it or its predecessor.

The game is set in an alternate continent named Calradia, but that’s as far as the “fantasy” aspects of this game goes.  There is no magic, no enchanted swords, no elves, no monsters and no orcs. The setting is a gritty and realistic middle age where the only form of power lies in steel, gold and the relationship with the nobles of the land. This is doubtlessly the first thing that makes Mount & Blade Warhand unique.

The continent is populated and ruled by six realms: The chivalric Swadia, the norse-like Kingdom of the Nords, the Slavic-inspired Vaegirs, the mountain-dwelling Rhodoks, the mongol-like Kergit Khanate and the rich Sarranid Sultanate, that resembles an Arabic realm. Each of those powerful factions has its own culture, architecture, rulers and unique troops, creating a rich and varied universe in which to play. 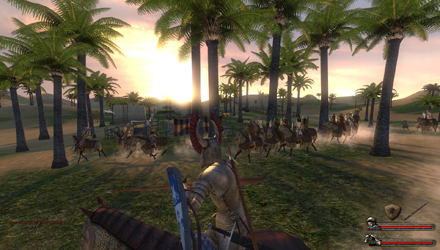 Riding towards the sunset in a beautiful oasis village...

The story is very limited. Some would actually say that there’s no story at all. You’re a random dude (or dudette), and you have to make ends meet in Calradia. Besides a very compact initial questline that will teach you the basics, you’re on your own. This is what I meant in the title of this paragraph: Mount & Blade Warband could be defined as the wet dream of every fan of sandbox games.

There’s no overall storyline to bind you. You can be a trader, a bandit, a mercenary, a tournament champion, become a vassal for one of the realms or create your own domain. You don’t like the king you serve? No problem. You can start a rebellion to put a different claimant on the throne. You create and shape your own legend according to your taste and with very few restrictions.

Whatever role you chose, you’re still not bound to it. Tired of being the vassal of a king? You can renounce your oath (and any fiefs you’ve been assigned, of course), and swear allegiance to another faction. The claimant you put on the throne is no more of your liking? You can rebel and create your own empire, starting a quest to conquer and unify all of Calradia.

Trading is getting boring? You can start hunting other caravans to rob them of all their goods, or travel from city to city looking for quests and missions to earn money and glory.

You can even fit multiple roles at the same time, playing as a mighty general in times of war, and as a caravan master when there’s peace, or an almost endless variety of other combinations.

The path of glory, from mercenary to king
One of the most prominent features of Mount & Blade: Warband is that the world itself lives and breathes dynamically around you. Every faction has, besides its king, twenty feudal lords with their own personality and quirks.

Some are honorable and will remain faithful to their king unless the situation is really dire, some others will switch faction according to the balance of power several times during the game. Some will even join you as your vassals if you manage to become king yourself. All of them will move in the world according to their own interests and missions, fighting in wars and tournaments, courting ladies, administering their lands, and interacting with you on several levels.

The political game is actually frighteningly complex, especially considering the sheer number of actors in play. Kingdoms will go to war with each other according to or independently from your actions, will gain and lose territory, and the newly acquired fiefs will be given to one of the lords or to you, if you managed to earn the respect of your king and your peers.

When you’re a king yourself you’ll have to weigh the relations between the lords under your rule carefully. Assigning a fief to the wrong lord can upset the others, while giving it to the right one can increase the respect you receive from your subjects considerably. Often there won’t the a “right” or a “wrong” choice, but you’ll have to tread carefully to keep a balance between your vassals, making sure that the ones you upset with a decision will be happy about the next, without starting to harbor desires of rebellion. 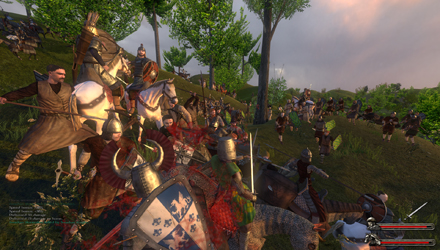 Nothing is like the sweet scent of carnage in the morning...

There are also several ladies, wives, daughters and sisters to the lords, that normally do what noble ladies did in the middle ages. They attend feasts, act as gossip hubs, and can be courted for love or politics. All of the characters are related by a quite complex family system, that will play an important role in the game. You can marry a lady to enter the good graces of the lords she’s related to, or have to persuade in several ways a particularly stubborn lord if you want to marry his daughter that you happen to like more than the rest.

Obviously, if your character is a female, she can court (or be courted) and marry one of the lords themselves. This is only one of the differences that characterizes the game as a female Warband leader. It’s the middle ages, and women aren’t exactly treated as equal, as a consequence the game is openly more challenging if played as a lady.

While this might for sure stir some feminist hearts out there, it’s quite realistic, and the disadvantage isn’t so overwhelming to make it frustrating or less fun. On the other hand, managing to raise to power despite the difficulties of being born with boobs tends to be quite rewarding.

The same  level of complexity can be noticed in the world’s economy; it is completely dynamic and governed by supply and demand. Caravans will move from city to city and will dynamically alter available goods and prices, making thriving as a trader quite a challenging and interesting enterprise.

What I’m referring to as “fiefs” are basically the hundreds of cities, castles and villages scattered on the continent of Calradia, and that act as quest hubs, military bases and markets. Every single one has its own peculiar look and it’s permanent inhabitants. No village or city in Calradia looks the same as the others, and the same goes for all castles. This is obviously quite important even during sieges, as every castle and city has a different setup for walls, towers and access points. Each siege has its unique tactical quirks that a good general will have to learn and exploit. 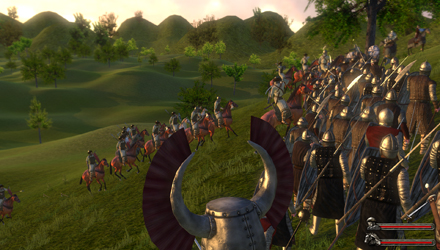 The heart and soul of Mount & Blade Warband is, obviously, your Warband itself, that will evolve from a ragtag mercenary company to a full fledged army counting hundreds of individual soldiers. At the end  of my latest play through I had about 220 soldiers under my direct command, without counting the garrisons of my fiefs and the troops under my vassals.

Your own character is the centre of your army. He will progress in the usual RPG way, with levels and skills, becoming more and more powerful. You will be able to buy new pieces of armour, weapons and warhorses that will raise your combat effectiveness. Obviously you will also be able to fully customize your character’s appearance with a complex slider system that loosely reminds me of Oblivion. There are no classes in M&B Warband, and while a few decisions on your character background will have a marginal impact on your initial skills and stats, you will be completely free to chose the way you want to skill up. You might decide to invest everything you can in strength, agility and combat skills in order to create a powerful hero able to cut a bloody path in the middle of an enemy army, or to shape him as a great leader that will be able to field more soldiers at the same time, or an archer that can stand back and chose his targets by killing just the most powerful enemy commanders and units. The possibilities and combinations are nearly endless.

Besides you, the most important part of your warband are your heroes. There are sixteen of them scattered around Calradia, and you can recruit some or all of them. Each of them has his or her own unique looks, personality and story and they progress in the same way as your character. You can freely give each of them a role, thanks to the “party skills” system. Basically some of the skills like tactics, surgery etc.. can be delegated to your heroes, letting you invest on other skills. This will turn them into specialists that will benefit the whole party, for instance by healing your men faster after a battle, or saving some from death, turning a mortal wound in one that will just require some rest, or again lowering the prices in marketplaces and so forth. Of course your heroes can also grow into powerful warriors in their own right, forming the elite of your army.

Again, relationships play an important role, and your heroes will interact with each other, often with conflicting personalities that will force you to juggle between them to avoid them leaving your party, or to wait until your leadership is high enough to keep them in check. If you like looting villages and slaughtering peasants, maybe it’s better not to hire the most soft-hearted ones. For sure keeping your party united and effective is a quite challenging work of balance in itself. 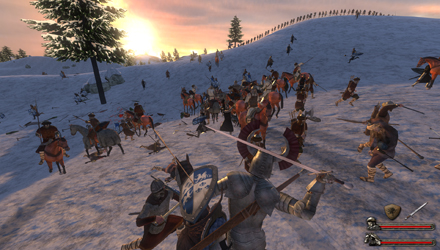 Winter sports in the Middle Ages

The lowest level of your warband are your rank and file troops. You can travel from village to village recruiting volunteers that will provide cheap but low level infantry, or you can visit taverns where you will be able to hire costly but higher level mercenaries.

You can pretty much hire every single unit in the game, independently from your affiliation (or lack thereof), to create the army you like the most. You can even recruit for instance, the peasant women that you rescued from some bandits (or the bandits themselves). Initially they will be weak, but will ultimately evolve into powerful female knights. Every basic troop can level up, turning into a more advanced version with better equipment, and eventually specializing in areas like archery, heavy infantry or cavalry.