It took me a long time to fall in love with racing games, and as such, Need for Speed is a series that’s very much passed me by. I do know, however, that it’s had varying degrees of popularity, covering many different play-styles in the process. In more recent years, NFS: Shift has been the EA racer of choice for many, taking more of a realistic approach to instalments like Hot Pursuit… EA don’t seem shy about allowing their franchise to splinter off, though, and no more so is this evident with the release of the Black Box produced arcade racer, ‘The Run’, which was met with mixed opinions from the critics.

Of course, the game makes it out on every conceivable format too, and it was down to Firebrand Games to bring the action to the smaller screen of the 3DS.

Girls just wanna have fun…
In this version, you play as a guy simply known as Matt (rather than Jackson Rourke in other versions), who begins the game in his car as it’s being pushed off a bridge by a shady duo. The two are seemingly trying to stop him from entering The Run, a high-profile (but illegal) street race across the United States.

After breaking free from his potential watery death, a mysterious red-headed woman greets him on the shore, offering her ride to help him win the money he so desperately needs. In desperate need of funds, Matt has no option but to go along with her and, despite not fully knowing her intentions, gets the both of them to the race’s starting grid in the nick of time.

The story on 3DS takes a slightly cornier, more light-hearted approach than that of the main game, with much of the story told in graphic novel styled, barely animated images. I’m unsure as to why using storyboards instead of actual movies is very much the in-thing on 3DS at the moment, but the story here continues that trend, while being functional but hammy. These cut-scenes are regularly interactive, though, adding mini-games into the mix, such as using the stylus to escape the sinking car mentioned above, or to change a tyre in-between chapters. Nice touches, but they add very little to the experience. 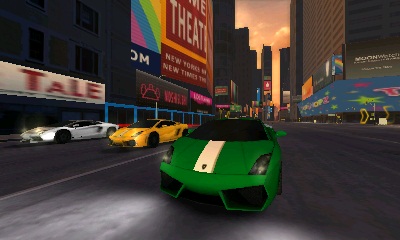 The car models are decent in spite of the format...

When racing isn’t racing…
The real gameplay handles like a cross between Driver and Burnout, rewarding you for dangerous driving by filling your nitrous meter, and you can also perform takedowns to remove your competitors and the police from the equation. It’s pretty much point-to-point racing with no circuits, but you’ll not always be in a straight race to the finish each time you start a level.

For example, one level might see you trying to get to the finish with your only objective being to avoid the cops, one might have you chasing down checkpoints before time runs out, and others put the focus on just you and one rival (which plays a part in the story). Some even have you avoiding gunfire by dodging a laser sight from another car, and at one point, a frickin’ police helicopter. During these game types, you can also pass other competitors to improve your standing in the overall competition. The mission for the most part, whatever the chosen distraction may be, is to get to the finish line before the timer ends.

Passing the competition in these non-racing modes, however, is easy. In fact, even when you get to the ‘proper’, traditional races, once you get out ahead, it’s not often you’ll falter unless you fall foul of the traffic or one of the mid-race mini-games decides to screw you for no good reason.

The mini-games offer you some context-based actions to follow in order to get through a section. You might need to rub the screen to build up a boost to jump a gorge, Springfield stylee, or you might need to do something similar to brake harder, and another slows down time as you look for the eye of the needle in a police blockade.

On the whole I found them to be very intrusive, detracting from the game’s strengths. They take away your direct control of the car, and change your camera of choice to something that the game deems more dramatic, which is disorienting when in the middle of the action. They also kick in with no warning or reasoning, and are punishing when failed. To this end, you’re given three ‘lives’ during the race, and a health bar which reduces every time you collide with another vehicle or wall. Fail a mini-game: lose a life, damage your car too much: lose a life. Sounds fair on paper, but not when the mini-games change the rules of the game completely. 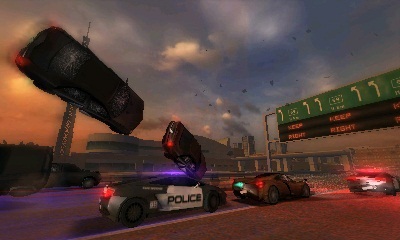 Takedowns are reminiscent of Burnout!

The one that caused me the most problems was when the game took control in snowy conditions and only allowed me to steer wildly through built up traffic for a short stretch of road. There is no margin for error here; the slightest touch of another car, the slightest nick, one that you’d get away with in normal gameplay, will cost you a life in these sections. Why the imbalance? Why move the goalposts in this way? Why?! *Shakes fist*

That’s just when it worked as it should. Often this particular instance would force me to crash into an oncoming truck before actually starting the mini-game; I’d already lost that chance at getting through unscathed. This happened for three lives in a row at one point, and then it was back to the beginning of the race, through no fault of my own.

Because each race in the game is a linear, point A to point B affair, there is also a distinct lack of challenging cornering to do, and there’s not really that much emphasis on good driving. In fact, a lot of gentle bumbling off walls and barriers is enough to see you through as long as you’re quick enough. When you are teased with something interesting, control is taken away from you. Case in point: after a couple of straightforward and, honestly, pedestrian races early on, my eyes lit up when glancing at the map on the bottom screen; a big, juicy u-bend was coming my way. You know what happened? A mini-game event took over, rounded the corner for me and robbed me of the satisfaction of doing it for myself. Furious? You have no fucking idea.

It’s a shame; there’s genuine fun to be had in the moments of pure racing, when it’s just you against the other drivers, performing takedowns and causing carnage, but these moments are so very few and far between. You buy a game like this to drive the car, not have the control ripped from you at every opportunity (or at least the moments when you might have been starting to have fun). It felt like being a kid again and trying a new game at a friends house, and having that friend (now agitated) take the pad away from you because he’s afraid you’ll make the game look bad.

There is a levelling system in play that opens up new cars and chassis mods to add a bit of customisation to the other modes (the car customisation is surprisingly deep, but unnecessary), while also unlocking new events in the Challenge Mode. The Challenge Mode essentially consists of replaying the levels but with a new objective; smashing up 20 cars or getting a certain score in a timed event as just two examples, with a Gold/Silver/Bronze medal system. There are quite a few levels of difficulty on offer too, but the mode’s inclusion isn’t enough to save The Run from mediocrity. 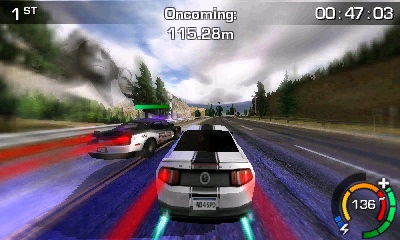 The moments of pure racing are fun, but they're limited in number.

Oh look at the tarmac!
Graphically, the game performs okay. There’s no slowdown, it runs well, and despite the cut-scenes’ weak comic-book style not really matching the rest of the game’s design, it looks nice enough. The cars are decently modelled, especially the player’s vehicles, and the environments at times can look surprisingly nice, especially when the wet track effects come into play.

The use of the 3D is also fairly decent without ever jumping out at you. You’ll notice it more on the text, for some reason, but it adds enough to improve the visual experience. Unfortunately, while infinitely better than Asphalt 3D, it lacks the sheer gloss and sheen of something like Ridge Racer 3D.

Get that sub-woofer on!
The audio redeems things a little, but as important as sound is to an experience, it’ll never save a game like this. The cars sound okay, the sounds of the race are perfectly adequate, and there is a licensed soundtrack. While I’m not convinced I’ve actually heard of any of these bands or groups before, their tracks sound somewhat familiar.

The voice acting, though, is pretty corny. It matches the vibe of the graphic novel style cut-scenes though, so in that way it at least fits the direction that Firebrand have gone for. 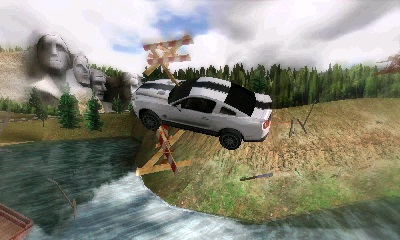 These moments where control is taken from your grasp, simply frustrate.

Hellooooooo! Is anybody out there?!
The game’s multiplayer is bizarrely hidden away in the depths of the Autolog menu, a place that’s supposedly the home of stats and customisation. It’s an odd location to hide away what should be one of the jewels in your crown, and it might help explain why it seems so dead online. From here you can play locally with other 3DS owners, providing they’ve got a copy of the game, or you should be able to jump online to play the two available modes. The modes on offer are a straight race and Cops vs Racers, which I imagine would be the most fun of the two.

I imagine this because no one I know owns a copy of the game, and I was unable to find an online match in two days of trying. The community, it seems, is already dead. Honestly, this is not the type of game you’d expect to sell well on this format, so why this got an online mode ahead of FIFA, I’ll never be able to understand.

I don’t have the need…
It’s hard to find any point of argument from which it’s possible to recommend Need for Speed: The Run on 3DS. It’s a massive shame; there’s a genuinely good game hiding in here somewhere amongst the fluff.

As it stands, it’s a rather empty experience that suffers from a lack of focus, and the mini-games and quick-time events only serve to further disrupt and frustrate. The online mode could have been its salvation, but its current, eerily quiet status doesn’t bode well for those looking to play online. Give this underwhelming package a miss.