At the risk of upsetting my peers of a similar age or older, I’ve never really fully appreciated the simple genius that is Pac-Man. I know all about and respect his lineage, contribution and importance to the industry, but nearly any attempt on my part to plough any time into the game over the years usually ended after ten minutes. In fact, the most attention I ever spent on it was thanks only to Google’s famous interactive logo celebrating Pac-Man’s thirty years in gaming a few months ago. It was also probably the reason that 2007’s Pac-man Championship Edition totally passed me by.

The sequel to that remake, Championship Edition DX, hit the marketplace Wednesday just gone and for some reason I opted to give the trial a go and something strange happened; I couldn’t stop playing it. What made this edition of Pac-Man appeal more than the others? Some subtle reinvention, for one.

So… did you know that Pac-man was originally called ‘Puck-man’…
Soooo, there’s not much of a story here outside of ’circle eats more circles, gets chased by ghosts’, so instead I’m going to mention that this is part of Namco’s Generations series, which according to the in-game news mode is designed to add a fresh spin on the classic games from the company’s back catalogue. If you’ve played Taito’s Space Invaders Extreme, you’ll know what you’re looking at here and if Namco do half as good a job as they’ve done with Pac-Man, they should see every bit as much success.

A rotund man’s quest to overdose!
It’s obvious from the very beginning that the basic principle of Pac-Man remains at the heart of this ridiculously addictive arcade game. The core gameplay mechanic of navigating mazes, eating dots and pills, avoiding or eating ghosts is still very much the point of the game, but Championship Edition DX has more than enough tricks up its sleeve to keep people hooked. For a start, you won’t just have to deal with Blinky, Pinky, Inky and erm… Clyde, as there are sleeping ghosts littered around the maze who will form an orderly queue behind Pac-Man as he passes them, and the length this queue can escalate extremely quickly. This gives you an added element of danger to proceedings, almost as if playing a game of ‘Snake’ within Pac-Man; a nice twist and can really ramp up the difficulty. Thankfully you have a few tricks of your own to help contend with this. 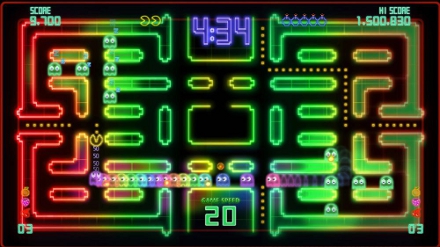 All the colours of the rainbow!

The first is a bit of a leveler for those new to the Pac-Man experience or those struggling with the new pace that the game is capable at throwing at you. As you approach a ghost and you’re not powered up, the game slows down slightly and the action zooms in to allow you to evaluate your escape plan. Should you still find yourself trapped, you have a limited number of bombs (the number dependant on the mode) to bail yourself out. Think Geometry Wars, where using the bombs will clear the slate completely, allowing you to build up all over again but with your multipliers gone. Lastly, when popping a power pill, you can gain huge amounts of points by eating the long line following you. Some of the ghosts even carry power pills, allowing you to chain together long feeding sessions along the way.

You’d think that these additions make the game a total cakewalk, but this isn’t the case with the speeds the game can chuck at you, along with some rather changeable levels and punishments for using the above benefits. This is a game that can be extremely challenging. Besides, the main enemy in the game is time, and this’ll come to light when you look at the game modes. The game has nine courses and each comes with its own list of challenges, which all revolve around three core game types. The standard mode is Score Attack, where you simply go in for the allotted time and try to rack up as many points as humanly possible. In the Time Trial modes you have to collect x amount of fruit in the allotted time, and to get these to spawn you have to rid one side of the map of dots. The last mode is Ghost Combo, where you must eat as many ghosts in one go as you can to beat the highest score. This adds a bit more of a tactical elements as you bide your time trying to pick up as many ghosts in your conga as possible and wait for the right moment to chow down on your pursuers. This one is easily my favourite mode on offer. 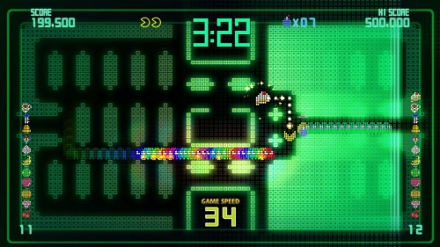 Simple, colourful and effective
Everything about the presentation in CE DX is about performing a massive celebration of all things Pac-Man. There are eight different visual styles to choose from for the mazes alone, from basic colours on black, Lego styled, pixelated or multi-coloured vectors, and they are all a treat to look at, if very basic. Not only that, but you can choose different visual styles for Pac-Man and the ghosts, some of which representing Pac-Man from his various iterations throughout the years. Let’s face it, it all looks beautiful and like the standard CE before it, refreshes what we know but also remains true to the original game.

Wakka wakka wakka…
Alongside the audible fan-service (wakka wakka!), the original soundtrack here is nothing short of phenomenal. Upbeat and funky cuts accompany the action and it couldn’t really fit any better. I honestly don’t think that there’s a bad pick among the selection here, as they not only sound amazing against an arcade game like this, but wouldn’t sound out-of-place on the dance floor. I can’t say fairer than that. 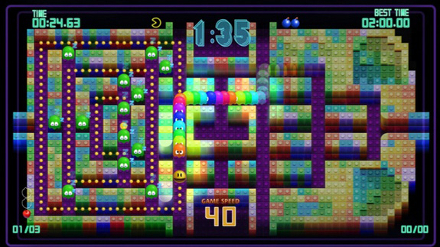 Return of the Pac!
Pac-Man Championship Edition DX is not only a fantastic way to celebrate the round one’s thirty year anniversary, but it is simply a great game in its own right irrespective of heritage. This has been a strong year for downloadable titles; there have been some very original, imaginative and surprising success stories along the way, and while this may not be at the top of the list when handing out awards for such things, you’ll be hard-pressed to find a game that captures the heart of fun in the most purest of forms. Should you buy it? Yes. A thousand times, yes.